Gary Neville on England vs Denmark: Bukayo Saka to come in for Jadon Sancho, but you could flip a coin - we are blessed

Neville also believes Southgate is still England's biggest asset, and says the players will be more excited than anxious for the game of their lives; pick your England XI in the team selector at the bottom of the article

Gary Neville would pick Bukayo Saka to start England's Euro 2020 semi-final against Denmark at Wembley, but admits you could flip a coin, such is the attacking talent Gareth Southgate's side is blessed with.

Saka was injured for England's 4-0 quarter-final win over Ukraine on Saturday, but impressed in starts against Czech Republic and Germany at Wembley.

And while Sky Sports pundit Neville would select the Arsenal man, he believes Southgate could realistically go with one of Jack Grealish, Phil Foden, Marcus Rashford or Jadon Sancho and still not be disappointed.

Neville also believes Southgate is still England's biggest asset, and says the players will be more excited than anxious for the game of their lives.

Who would make your England XI vs Denmark? Pick in our selector at the bottom of the page...

Who should start at Wembley?

"I think Raheem Sterling and Harry Kane pick themselves. But between Saka, Grealish, Foden, Sancho, Rashford, I honestly think you could flip a coin between them all and it could land on any of them and you wouldn't be disappointed. We have such strength in those positions.

"But it may not even be a four-man defence system - Gareth may match Denmark up. He did that against the German team, and I do think that because of the experience against Scotland, where England struggled against the wing-backs, that he may match them again."

"I've seen quite a few tournaments where there have been selection dilemmas a lot worse than this one. To be fair to Gareth, since Russia, I've had full trust in him.

"Coming into this tournament I said he was our greatest asset, and I still think he absolutely is.

"I know how different it is for England teams to compete at major tournaments and do well.

"He'll get it right on Wednesday, but that doesn't necessarily mean the result will go our way. Sometimes you can pick the right system and you don't get the bounce of the ball.

"I've seen it before with Gareth, he knows exactly what he's doing, and he knows what his team and squad can do.

"He's made incredible decisions in this tournament, bold decisions, and decisions not a lot of us would have made, both fans and media. He deserves credit for that."

Excitement over nerves... it's the game of their lives

"Will there be nerves? I think more immense excitement. I think England teams in previous tournaments that have struggled to get out of group phases or the second round, there has been anxiety.

"But this group, once they got past Germany, the excitement builds, the confidence builds, and the nerves start to go away a bit.

"It becomes one of those moments as a footballer you've anticipated all your life. It's the game of their lives and they should look forward to it.

"I don't think they'll carry that much in terms of nervousness and anxiety, they'll just be really excited and desperate to get going."

'Don't forget to do your job'

"I think on Wednesday night the only danger is the players feel unbeatable and forget to go and do that job, that clinical bit.

"There are lads in this group that have been there in 2018 in Russia, been so close; I think that will help get them over the line on Wednesday.

"They have to go and finish the job off. There will be huge disappointment if they don't come away from Wembley with a win."

Who makes your XI?

Who would you select in your England XI to face Denmark in Wednesday night's huge clash at Wembley?

Use our team selector below!

Will Gareth Southgate go to a back three? What threats to Denmark pose on England's watertight defence? What can England learn from October's Nations League defeat against the Danes? And has Raheem Sterling been the overall player of the tournament so far?

Denmark scouting report: What do England need to do? 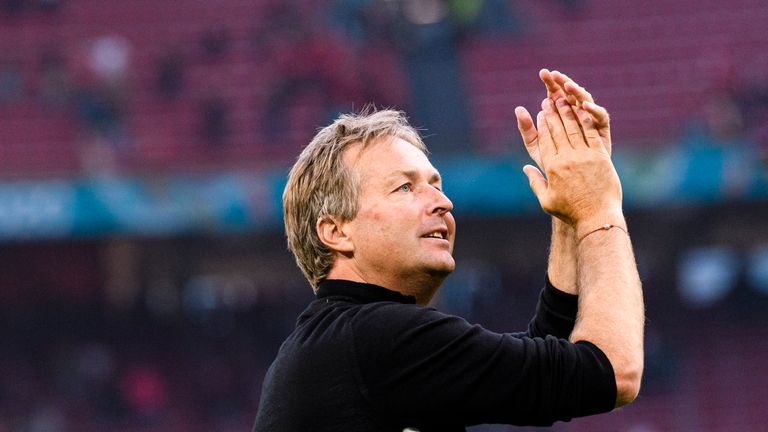 Kasper Hjulmand admits he's trying not to be superstitious ahead of Denmark's semi-final with England - but he can't let go of his lucky shirt! (Pictures: ©UEFA 2021)

England will be the biggest test yet but Denmark have little to fear given Gareth Southgate's side did not even score a goal against them in two Nations League meetings earlier this season. Hjulmand's side even won at Wembley in October.

The loss of Eriksen, scorer of the winning penalty that evening, clearly robs Hjulmand of his most talented player. But the coach deserves huge credit for handling the tactics as well as the emotions in switching formation mid-tournament and making it work.

Who starts alongside Kane and Sterling?

Raheem Sterling has been England's standout player at Euro 2020, Harry Kane is back among the goals at the right time and has the Golden Boot in sight.

Two thirds of England's three-pronged attack that will be tasked with overcoming Denmark in the semi-finals at Euro 2020 at Wembley on Wednesday looked nailed on, but what about the third and final spot?

Mason Mount, Phil Foden, Marcus Rashford, Jack Grealish, Bukayo Saka and Jadon Sancho have all been deployed in attack so far this tournament but with Gareth Southgate notoriously keeping the nation guessing with his line-ups, don't put it past the England manager to spring another surprise.

Ahead of England's bid to reach a first major tournament final in 55 years, Sky Sports Football's team of writers examine the options at Southgate's disposal ahead of the showdown with Denmark…