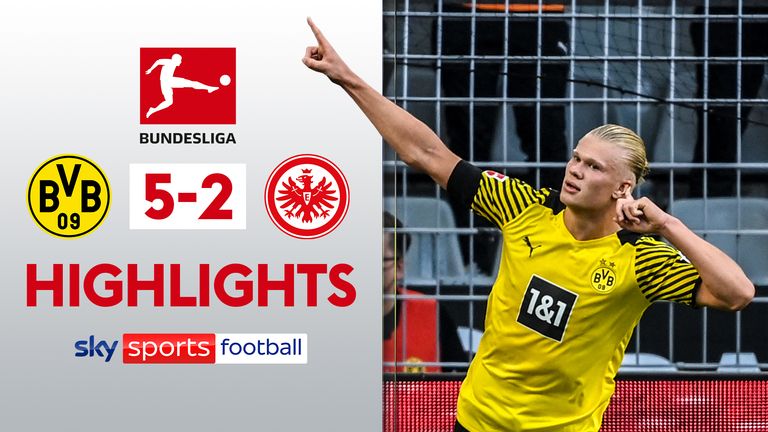 Highlights of the Bundesliga match between Borussia Dortmund and Frankfurt

Erling Haaland scored twice and set up another three goals as Borussia Dortmund steamrolled past Eintracht Frankfurt 5-2 on Saturday to put down a marker in their Bundesliga opener.

It was captain Marco Reus who put new coach Marco Rose's team in the driving seat in the 23rd minute, scoring from a Haaland assist, with Dortmund fans returning in limited numbers to the 81,000-capacity stadium.

A Felix Passlack own goal four minutes later did nothing to slow Dortmund down. Thorgan Hazard rifled them back into the lead in the 32nd minute after Reus combined with the 21-year-old Haaland - who had scored a hat-trick in their German Cup first-round win last week - on yet another counter-attack.

Dortmund, who face champions Bayern Munich in the German Super Cup on Tuesday, completed their first-half goal rush with Haaland pouncing on a Stefan Ilsanker mistake to charge into the box and slot in for a two-goal lead.

Gio Reyna added a fourth goal with a tap-in on the hour with Frankfurt at the complete mercy of the bursting Dortmund runs that kept on coming. Another Haaland run earned him his second goal of the evening following a VAR review.

Union Berlin and Bayer Leverkusen drew 1-1 in their opening Bundesliga game. Taiwo Awoniyi gave Union a seventh-minute lead, but Leverkusen answered with a period of pressure and Moussa Diaby equalised in the 12th minute.

It was the first time Union avoided defeat in their opening Bundesliga game of the season at the third attempt.

Promoted teams Greuther Furth and Bochum made losing returns to the league. Pellegrino Matarazzo's Stuttgart team routed Furth 5-1, and Bochum had a player sent off in the fourth minute before losing 1-0 at Wolfsburg.

Robert Tesche was sent off early for preventing a Wolfsburg goal with his arm. Manuel Riemann saved Wout Weghorst's penalty, but the Dutch striker made up for his miss in the 22nd minute, when American John Brooks set him up for what proved to be the winner.

Stuttgart's win was marred by a serious injury to 17-year-old forward Mohamed Sankoh.

PSG presented Lionel Messi to fans inside the Parc des Princes stadium ahead of their Ligue 1 clash with Strasbourg on Saturday, but the Argentine was not included in the squad for the match.

Messi took to the field pre-match along with fellow new recruits Sergio Ramos, Gianluigi Donnarumma, Achraf Hakimi and Georginio Wijnaldum, and spoke to the raucous crowd.

"It has been a very special week for me," he said. "I want to thank everyone for the reception since I arrived in Paris. It has been truly incredible. I feel very happy and excited.

"I hope together we can enjoy this year and make it a great year for us. I am very excited about everything." 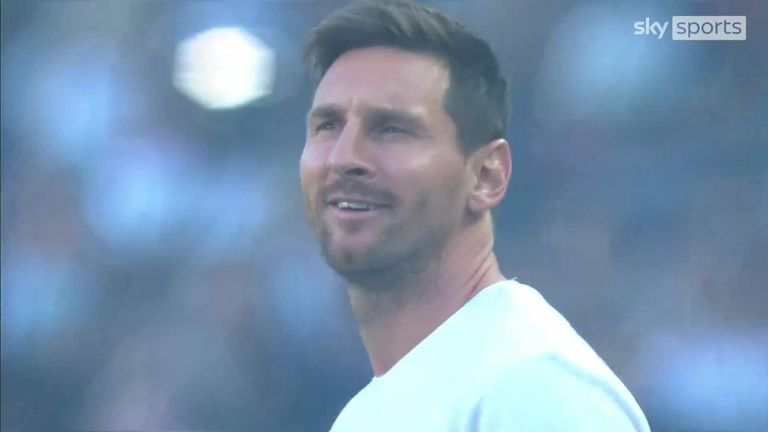 Goalkeeper Donnarumma and Ramos were also not included, but Hakimi and Wijnaldum were selected to start as Paris Saint-Germain made hard work of beating Strasbourg 4-2.

Messi, watching on from the stands, saw his new club take an early lead through Mauro Icardi at Parc des Princes.

Kylian Mbappe then doubled PSG's advantage in the 25th minute after his shot was deflected home, before the France international's cross was turned in by Julian Draxler two minutes later to put the hosts 3-0 up.

However, second-half goals from Kevin Gameiro and Ludovic Ajorque got the visitors back into the contest, with PSG looking uneasy in possession.

Alexander Djiku's dismissal for two bookable offences let PSG off the hook nine minutes from time, with substitute Pablo Sarabia tapping home at the back post in the 86th minute to make sure of the victory for Mauricio Pochettino's side.

The win sent PSG top of the table as they continued their winning start to the new season with two wins from two.

We earn the 3️⃣ points at the Parc 👏🏟#𝗣𝗦𝗚𝗥𝗖𝗦𝗔

Elsewhere, Christophe Galtier returned to Lille and punished his old club as Nice won 4-0 in Ligue 1.

Lille clawed back from 3-1 down to draw 3-3 last weekend, but there was no comeback this time as Gouiri made it 3-0 from the penalty spot shortly after the break and Dolberg headed in his second midway through the second half.

Karim Benzema picked up where he left off last season by scoring twice to fire Real Madrid to a 4-1 win away to Alaves in their opening game of the La Liga campaign.

Real had an uninspiring first half in Carlo Ancelotti's first league game since taking charge of the club for a second time but Benzema settled their nerves by blasting the ball into the net in the 48th minute after being teed up by Eden Hazard.

Defender Nacho Fernandez added to Real's lead eight minutes later, sliding in to stab a Luka Modric through ball into the net from close range.

Benzema scored a scrappy second goal in the 62nd but moments later, Alaves pulled one back when striker Joselu slotted in a penalty after a foul by goalkeeper Thibaut Courtois.

Substitute Vinicius Jr added a final goal for the visitors in stoppage-time, netting with a diving header as he met a cross from debutant David Alaba.

The visitors had gone ahead with a goal by Jos Luis Morales in the 39th minute.

Newly-promoted Mallorca took the lead against Real Betis with a first-half goal by Brian Olivan but Juanmi Jimenez equalized for the visitors just before the hour mark to secure a 1-1 draw.

Finally, Osasuna were held to a 0-0 draw at home to Espanyol.