Liverpool believe FIFA has no basis with which to ban Premier League clubs from selecting South American players who were refused permission to go on international duty this weekend.

On Wednesday it was revealed that FIFA had invoked Article 5 to block Premier League clubs from selecting Brazilian players who they had refused to release for the latest round of international fixtures.

FIFA applied Article 5 to enforce the restriction period of September 10-14 at the request of the Brazilian Football Association, which would see the players miss this weekend's round of Premier League fixtures and also Tuesday's Champions League matches.

Liverpool would be one of the hardest hit by these restrictions with Alisson, Roberto Firmino and Fabinho all currently unavailable for the trip to face Leeds on Super Sunday, who themselves would have Raphinha unable to play.

Sky Sports News understands Liverpool believe that, due to the circumstances surrounding the ongoing Coronavirus pandemic and the quarantine measures players would have had to face upon their return to the UK had they travelled, FIFA has no foundation with which to stop the players from being selected by their clubs this weekend.

Sky Sports News has been told that most of the affected clubs also believe FIFA has no basis to ban the players.

According to FIFA Article 22 of its Disciplinary Code, the sanctions that may be applied if these restrictions are ignored include fines and forfeiting the match 3-0, although it is unclear what might happen if Leeds and Liverpool, who meet at Elland Road on Super Sunday, both defied any FIFA ruling.

The Brazilian players who were not released for the World Cup qualifiers against Argentina and Peru also include Manchester United's Fred, Thiago Silva at Chelsea as well as Manchester City's Ederson and Gabriel Jesus.

It would mean Fred and Thiago Silva would also be ineligible for Manchester United's visit to Young Boys and Chelsea's clash with Zenit St Petersburg in the Champions League on Tuesday. 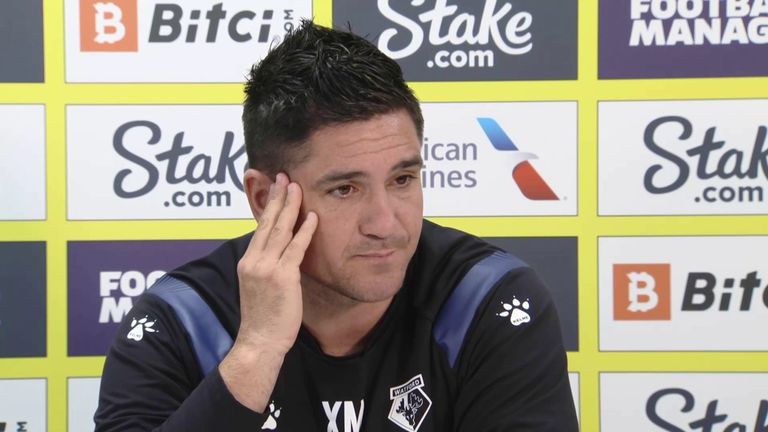 Watford head coach Xisco Munoz says the club are working towards a resolution after Chile asked FIFA to withdraw defender Francisco Sierralta. He was not released by Watford for Chile's recent World Cup qualifiers.

It is also understood that the Premier League are continuing to have dialogue with the relevant bodies over the matter.

Sky Sports News has contacted FIFA for a response.

Last week, Sky Sports News reported that Chile, Mexico and Paraguay had called on FIFA to enforce the restriction period on Ben Brereton of Blackburn and Chile, Francisco Sierralta of Watford and Chile, Newcastle and Paraguay's Miguel Almiron and Raul Jimenez of Wolves and Mexico.

Following the suspension of the Brazil and Argentina match last weekend, Brazil manager Tite was emotional in his press conference on Thursday when discussing the prospect of replaying the match.

"Soccer must not be above all that. We must respect lives. We are talking about human lives. I have the criteria to know what comes first and what does not. We must get our health back as fast as possible, so people can be back at the stadiums and back to work.

"Once people have a vaccine, then they can have their jobs back and their dignity back. But failing to obey the law is not the way of doing things. When will it happen? I cannot tell when it will happen. I have no power over that. I do not have the knowledge to know what happened and when it happened.

"I cannot play and I must not play? Then I will not do it. But going above the law? No way. Show a bit of respect. Respect for the institution, the country and the people. Respect towards a club, a national team. Tranquility and respect."