Virgil van Dijk: Liverpool defender happy with recovery from knee injury but says he has room for improvement

Monday marked a year since the Liverpool defender's ACL injury sustained in Merseyside derby was diagnosed; Virgil van Dijk expected to start against Atletico Madrid in the Champions League on Tuesday 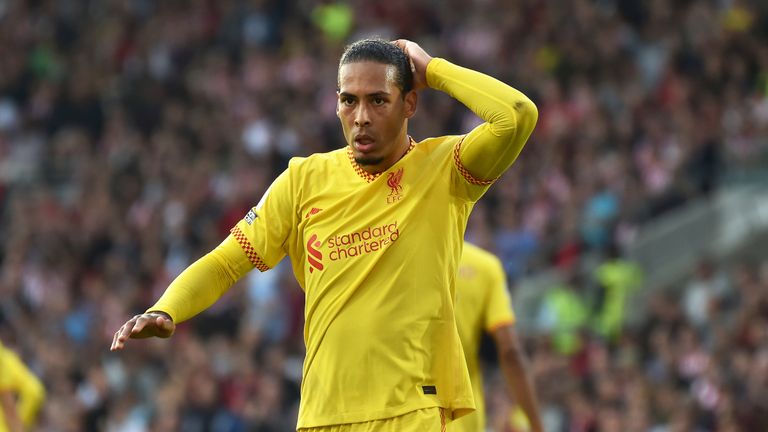 Virgil van Dijk says he feels under greater scrutiny following his recovery from a knee injury that saw him sidelined for nine months and has plenty of room for improvement.

It is exactly a year since the Liverpool defender was told he required surgery on an anterior cruciate ligament tear in his right knee sustained in a challenge by Everton goalkeeper Jordan Pickford.

Van Dijk, 30, went on to miss the remainder of last term but, after an extended pre-season, has since played every minute of Liverpool's opening Premier League games in the new campaign.

"I know there are a lot of eyes pointing in my direction, wondering 'is he going to be back in the same way'," Van Dijk said.

"They were already before but will be now even more, but it's something I'm not thinking about. The only thing I can do is try my best each and every game.

"Everybody knows how difficult it is to come back from a knee injury. I don't think there are a lot of examples of players who had an ACL and complex knee injury that gets back to their best after a year.

"I feel like I am improving. I have work to do but I don't think about what others have to say or judge.

"The only thing to get there is to play games, to get better, to get more confident in the things you do, get back to normal things."

Van Dijk was rested in Liverpool's opening group-stage win against AC Milan before he played in the 5-1 win against Porto and is expected to start against Atletico Madrid in the Spanish capital on Tuesday.

The Reds' 5-0 Premier League win was Van Dijk's fifth clean sheet in nine appearances for Jurgen Klopp's side so far this season.

"I am not a robot. I'm my own biggest critic and I know exactly when I can do better," he added.

"How I see it is to just improve as much as I can and I'm fairly confident in the way I see things.

"I'm playing at the highest level again, playing with a lot of joy, so far it is going in the right way and I am feeling fine but there is always room for improvement."