European roundup: Jose Mourinho's Roma beaten 6-1 at Bodo/Glimt, then complains: 'We don't have a good squad'

European roundup as Jose Mourinho concedes six goals for the first time in 1,008-game managerial career as Roma are put to the sword in northern Norway in the Europa Conference League

Jose Mourinho suffered one of the most embarrassing defeats of his career as Roma were thrashed 6-1 at minnows Bodo/Glimt in the Europa Conference League.

Roma travelled to northern Norway looking to extend their 100 per cent start in Group C but their much-changed side were humiliated on the artificial surface at Aspmyra Stadion.

Erik Botheim's eighth-minute opener and Patrick Berg's thunderous effort put the hosts in control inside 20 minutes. Carles Perez halved the deficit shortly before the half-hour mark but, having got back into the game, Roma imploded after the break.

Botheim's second restored Bodo/Glimt's two-goal advantage and before Ola Solbakken's double, either side of Amahl Pellegrino's strike, saw a Mourinho side concede six times for the first time in the Portuguese's illustrious 1,008-game managerial career.

1 - A José Mourinho side has conceded 6+ goals in a single game for the first time ever, in what is the 1008th match of his managerial career. Shock.

Jose: We don't have a good squad

Speaking after the game, Mourinho took responsibility for the defeat, but said the gulf between his first-choice players and the rest of the squad is large.

Mourinho, whose Roma side sit fourth in Serie A with five wins and three defeats from eight, made nine changes from the weekend defeat against Juventus.

"If I could use the same players every match I would. It's risky because there's a huge gulf between our first choice and second choice players. I expected better, but it's my responsibility." 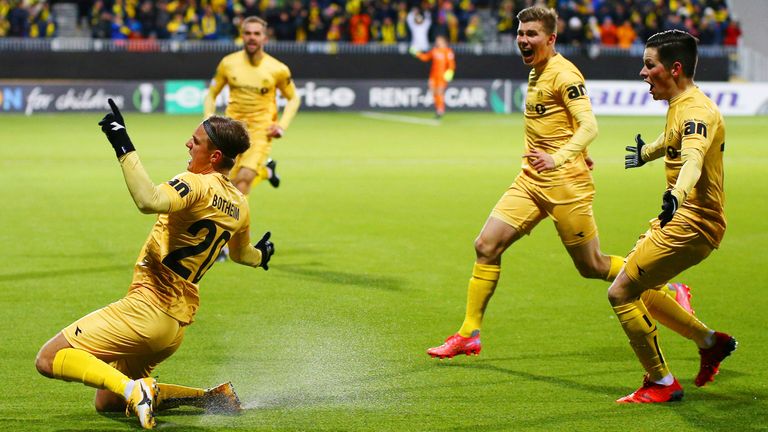 Bodo/Glimt Chief Executive Frode Thomassen says their 6-1 thrashing of Roma in the Europa Conference League was an important night for Norwegian football.

He also told Viaplay: "They have more quality than us - their first team is a much better team than our second team. So it's my mistake. I wanted to rest players after Juventus, and before a game against Napoli, and I made this decision, and in the end, they are better players than my players, they are a better team than my team.

"The 6-1 could be five, could be seven, could be eight, because the game went in the direction where you lose complete control of the emotions of everything, but the reality of the game is the best team with the best players won.

"I tried to do it with a good intention, of resting my players for the next game, but we were punished because they are better than us."

Elsewhere in the Europa Conference League on Thursday, Rennes moved top of Group G with seven points after a 2-1 win at Slovenia's Mura.

Meanwhile, 10-man Copenhagen lost 2-1 to PAOK after goalkeeper Kamil Grabara was given a straight red card nine minutes into the game for handball outside the area.

Brazilian defender Sidcley and forward Andrija Ivkovic scored a goal apiece in the first half to send the Greek side to the top of Group F with seven points, one more than Copenhagen.

In Rotterdam, Feyenoord beat Union Berlin 3-1 after forward Alireza Jahanbakhsh opened the scoring from close range with his fourth goal since his transfer from Brighton. Bryan Linssen doubled the lead, before Union Berlin's forward Taiwo Awoniyi reduced it to one with his 10th goal of the season in all competitions. Luis Sinisterra scored Feyenoord's third goal in the second half.

Police in Rotterdam arrested some 60 Union Berlin fans in the early evening, saying they were seeking to confront Feyenoord supporters.

A day earlier, a group of Union officials, including president Dirk Zingler, were attacked at a bar in Rotterdam.

The win earned the hosts the top place in Group E with seven points. Berlin are bottom with three.

Ten-man Lyon earned a third straight victory to remain, along with West Ham, the last two teams in Europe's second-tier competition with a perfect record after the Ligue 1 side came from two goals down to beat Sparta Prague 4-3 away.

Sparta led 2-0 in Prague after Luk Harasln scored twice in the opening 19 minutes, the first goals Lyon had conceded in the competition.

But Karl Toko Ekambi pulled one back after collecting a through ball in first-half injury time and Houssem Aouar equalised eight minutes into the second half. Substitute Lucas Paquet put the French side ahead with a left-footed shot into the roof of the net in the 67th minute, before Lyon defender Malo Gusto was sent off with his second yellow card.

Toko Ekambi still extended the lead after he was left unmarked in the area, before substitute Ladislav Krejc scored a consolation goal for Sparta in stoppage time.

Lyon top Group A, five points ahead of Sparta, while Rangers are third on three points after beating Danish club Brondby 2-0.

Lorenzo Insigne and substitutes Victor Osimhen and Matteo Politano all scored to give Serie A leaders Napoli a 3-0 victory over Legia Warsaw for the Italian team's first win in Group C.

Meanwhile, After beating Italian champion Inter Milan 3-1 at the weekend, Lazio was held to a 0-0 draw against French side Marseille, who drew its third straight game in Group E.

In Sevilla, Real Betis and Bayer Leverkusen both scored late to draw 1-1. Borja Iglesias put Betis ahead from the spot in the 75th minute, with Leverkusen equalising through a deflected shot by Robert Andrich seven minutes later. Betis and Leverkusen are tied at the top of Group G with seven points.