Match report and free match highlights as Harry Kane produces a masterclass against Manchester City, providing the winning goal to torment the side who tracked him throughout the summer and blow the Premier League title race wide open 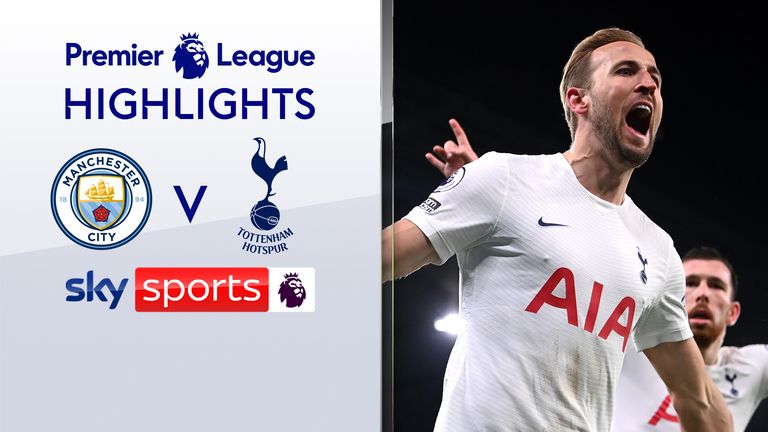 FREE TO WATCH: Highlights from Tottenham's win at Manchester City

Harry Kane came back to haunt his long-term suitors Manchester City as his 95th-minute strike secured an improbable 3-2 victory in a pulsating Saturday Night Football clash at the Etihad Stadium.

This was one of the great games of the season, and so often these two teams deliver when they come together, but this ignited Spurs' Champions League hopes and Liverpool's Premier League title aspirations.

Kane was City's chief tormentor from start to finish, setting up Dejan Kulusevski's opener with his brilliant dissection of City's high defensive line (4). Ilkay Gundogan would deservedly level matters (33), but having withstood heavy pressure upon the restart, it was Kane who delivered again.

The England captain met Son's cross to finish expertly across his body (59), and he might have had a second when he beat Ederson inside his near post but Kulusevski was ruled offside upon VAR review in the build-up (74).

City had valid claims for a penalty when Bernardo Silva's low cross slammed into the arm of the diving Cristian Romero and after VAR Darren England instructed referee Anthony Taylor to consult his pitchside monitor, City were handed a dramatic reprieve.

Riyad Mahrez dispatched his penalty with aplomb high into the net (90+2) but Kane would have the final say to spark wild scenes in the away end as the striker outmuscled Kyle Walker to head Kulusevski's cross into the net (90+5).

"It's a massive day for the top-four race but also the title race," said Jamie Carragher on commentary as Kane dramatically changed the picture at the top of the table. The result means Tottenham moved up to seventh in the table, four points behind Manchester United in fourth with two games in hand.

City remain six points clear of Liverpool at the summit, but having played one more game. Liverpool can close the gap to three points when they host Leeds on Wednesday.

'One of our own' Kane floors suitors City

"It was an emotional game for sure, it was an exciting game," Antonio Conte said afterwards. "We played a good game. We followed a plan. Manchester City would keep the possession for 65 to 70 minutes for the game so we needed to be good tactically. But even when defending our first thought should be to attack.

"We created chances and scored good goals against a fantastic team. This win will give us more confidence. It wasn't simple to play Manchester City after three losses in a row."

Manchester City recalled Ilkay Gundogan for the visit of Tottenham. The German midfielder was a substitute for the 5-0 Champions League mauling of Sporting Lisbon, while Kyle Walker returned against his former club.

Tottenham made four changes, with Eric Dier back from injury and Dejan Kulusevski handed a first start. Sergio Reguilon revealed he missed the game due to a positive Covid-19 test.

Spurs hadn't lost four in a row in the competition since a run of six between October and November 2004, but they made the perfect start.

Kulusevski was handed his full debut and was celebrating his first Tottenham goal inside four minutes. Kane was the architect as he whipped Ben Davies' pass into his feet around City's high line to set Son free of Ruben Dias. 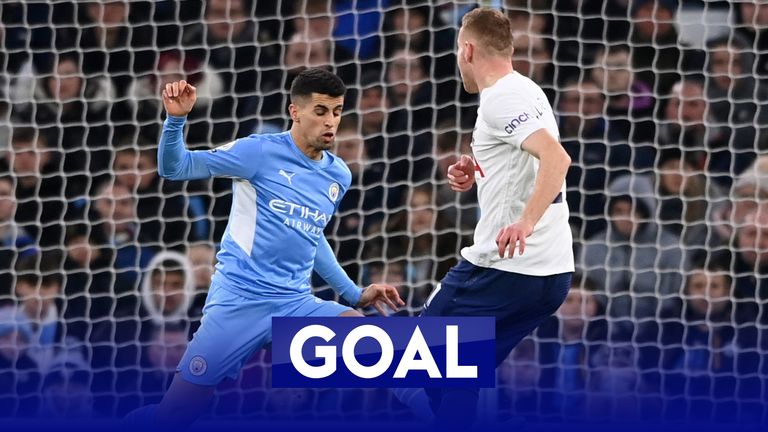 Son selflessly looked up with only Ederson to beat to slide the ball into the path of the onrushing Kulusevski for a simple tap-in.

It was the fastest goal Tottenham have scored in their 25 Premier League visits to City, who reacted angrily, no doubt aware of Liverpool's 3-1 comeback win over Norwich. They might have scored on two clear occasions before they eventually did.

Joao Cancelo cut inside to curl a right-foot shot just wide of Lloris' left-hand post before Gundogan grazed the post with an effort from the edge of the box. 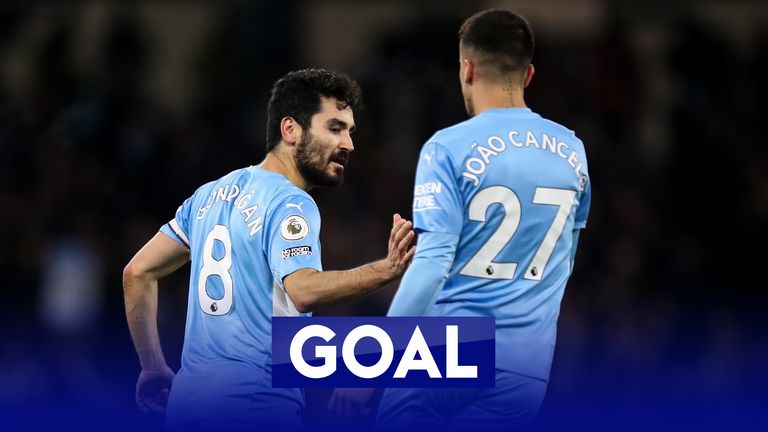 The equaliser would come on 33 minutes. Sterling was afforded far too much time to cross from the right but it was too close to Lloris, only for the Frenchman to inexplicably spill the ball into Gundogan's path for a simple finish.

It took City's captain for the night up to five career goals against Spurs, his favourite opponents. The hosts looked to complete the turnaround before the interval as the lively Cancelo drifted inside and saw a shot deflected just wide off Pierre-Emile Hojbjerg.

To the second half, and Kane continued to showcase his passing range as his reverse ball found Son's perfectly timed run again as he spun away from Walker before drawing the save from Ederson as he cut inside onto his left. 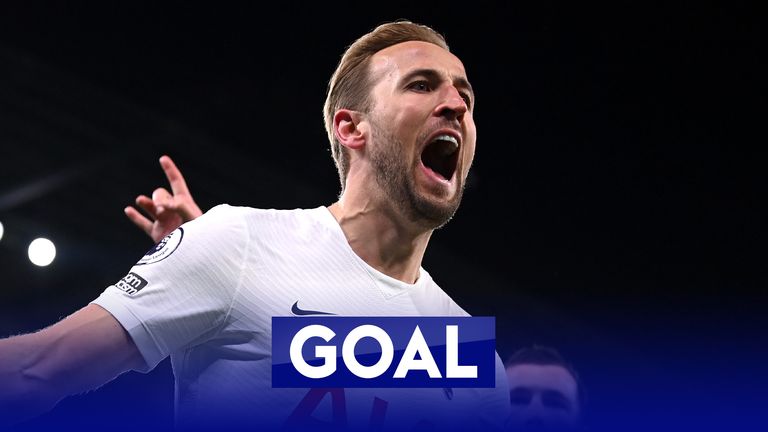 Kane's movement was irresistible, following his own crossfield pass to Son, such a fruitful combination down the years, so often the one-two that scores Tottenham's goals. Son exchanged passes with Sessegnon before his curled delivery was met by Kane, who opened up his body to sidefoot a half volley beyond Ederson.

City looked shell-shocked and ought to have fallen further behind five minutes later when Son collected Rodrigo Bentancur's pass to feed Kane once more, but Ederson made a stupendous save with his feet to keep City in the contest.

Kane's miss almost proved costly immediately as Bernardo Silva found Gundogan on the edge of the box and his curled effort was superbly tipped around the post by Lloris. Kane then thought he had given his team some much-needed breathing space when he collected Kulusevski's pass to beat Ederson too easily down to his right but VAR came to City's rescue.

City thought they had been let off the hook when Mahrez rifled his penalty high into the net but the excellent Kulusevski would ensure Tottenham would claim all three points as his cross from the right found Kane's stooping header as Conte and his coaching staff erupted on the touchline. 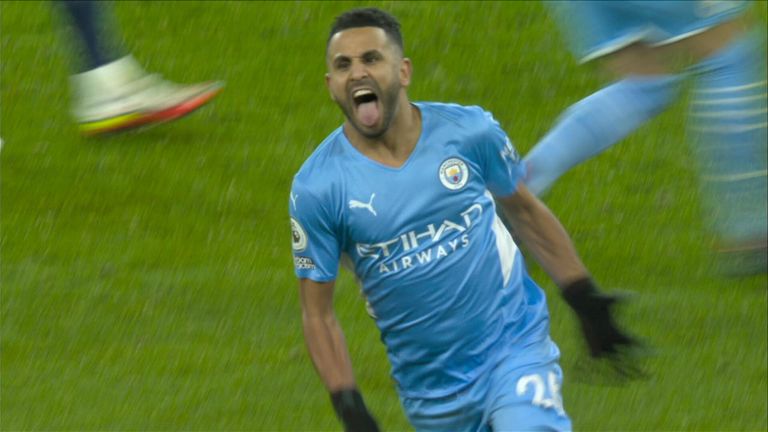 Mahrez levels from the spot!

Micah Richards told Sky Sports at full-time: "The title race is in Liverpool's favour. If they can come to the Etihad and win, it's game on. This is why we love the Premier League."

But this was Tottenham's day. Having completed a double over such decorated opponents for the first time since the 2015/16 season, this victory breathed life into their Champions League challenge. 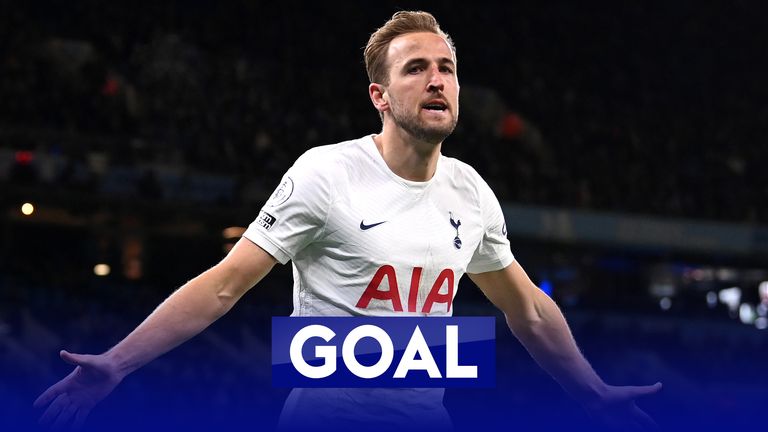 'Can you truly believe this?' - Kane scores again! 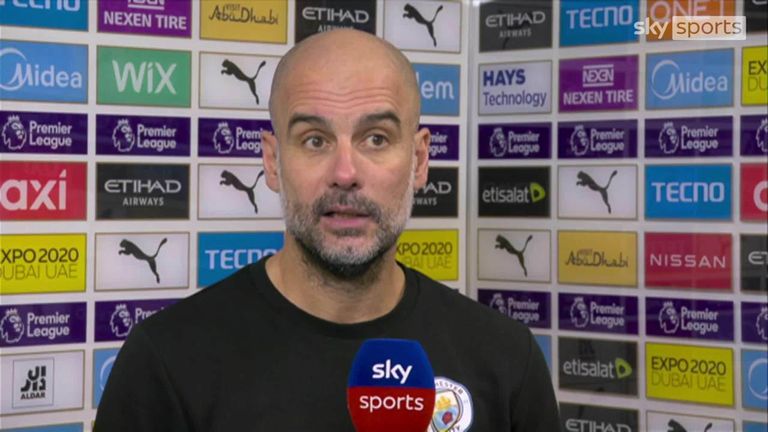 Manchester City manager Pep Guardiola praised Harry Kane's ability to bring his teammates in to the game after the England captain put in a man-of-the-match performance in Spurs' 3-2 win in the Premier League.

Man City boss Pep Guardiola: "They are clinical. They have Kane and Son and Kulusevski. Their crosses we could not defend. We didn't have the momentum. We didn't need to lose a game already to know how hard it is [to win the league]. There are many, many games still to play.

"We defended the third goal badly at the back post. I said two weeks ago that we had to win a lot of points so we knew it. Teams are fighting for the Europa League, Champions League, against relegation so every game is going to be a battle.

"Since October, we hadn't lost in the league so we know how hard that is. We knew they had a fantastic manager and after three defeats they would be there. In general, we controlled the game in the stats but we could not win."

When asked about Kane, Guardiola added: "It never was an option and everyone knows this so forget. It's in the past. It's not necessary for him to show today the goals he scored and his quality with the ball. Everyone knows it." Tottenham manager Antonio Conte claims the 3-2 win over Manchester City in the Premier League is an important reaction to the three straight defeats that preceded the victory.

Tottenham boss Antonio Conte: "This is a process, we are working very hard to improve aspect. This type of game gives us confidence. First of all I hate to lose. Our reaction was important.

"The Premier League is very difficult. Every game you have to fight a lot. We are continuing to improve everything and every level we work very hard. Harry [Kane] is for sure an important player for us. Today our strikers played very well. Harry was very good at keeping the ball.

"I think the first goal was great because this goal is about our job and our work that we are doing every day. Only one win is not good enough. Don't forget we are coming off three losses. But a win against Manchester City is very good.

"We have a lot of space for improvement. This is one of the hardest working teams I have managed in my career."

Are City still favourites for title? 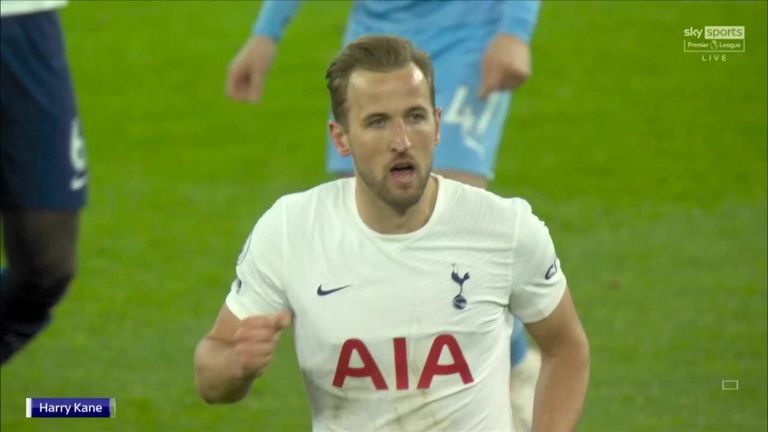 Jamie Carragher said that Harry Kane's performance was 'pure class' as he inspired Tottenham to a 3-2 win over Man City.

"I'd still favour Man City with Liverpool still to come to the Etihad and I think Liverpool's fixtures may be tougher. I certainly think for the next four of five days, the Leeds game at Anfield is more important than the cup final on the Sunday against Chelsea.

There was a little bit of hope that Liverpool could do something, a glimmer of hope, when Man City dropped points at Southampton. It was the first time in such a long time that they hadn't won and you very rarely see a Pep Guardiola team get pegged back so I'd still say they are very much in the hotseat.

"Even a team of Liverpool's quality coming here to win will not be easy but the great thing not just for Liverpool supporters but for the country is that it looks like we could have a title race on. Four to six weeks ago we thought that wasn't going to be the case so long may it continue." "Harry Kane was fantastic. He's put himself in the shop window again. It was a remarkable Spurs performance. I didn't see that coming. That was a masterclass from Spurs, like a big away day in Europe. A masterclass of counter-attacking football."

Harry Kane's winner for Tottenham, timed at 94:25, was the latest winning goal scored against Manchester City in the Premier League since Michael Owen for Manchester United in September 2009 (95:27).

It was also the second-latest winner in the competition scored against a side starting the day top of the table since Opta have exact times available (from 2006-07), after Danny Welbeck for Arsenal against Leicester in February 2016 (94:28).

Kane and Heung-Min Son have now assisted one another for 36 Premier League goals, the joint-most of any pairing in the competition's history, moving level with Didier Drogba and Frank Lampard.

Up next for Manchester City is another Saturday Night Football clash with Everton at Goodison Park, live on Sky Sports; kick-off 5.30pm.

Tottenham travel to Burnley in the Premier League on Wednesday; kick-off 7.30pm.