The Premier League cancels broadcast contract in Russia after invasion of Ukraine; the current Russian deal is worth around £6m a year to the Premier League; The EFL is expected to follow suit in the coming days

The Premier League has canceled its broadcast contract in Russia following the invasion of Ukraine and will donate £1m to the Disasters Emergency Committee relief fund.

The league's 20 clubs unanimously agreed to suspend the agreement with Russian broadcast partner Rambler (Okko Sport) with immediate effect. The current deal is worth around £6m a year to the Premier League.

A donation of £1m will also be given to the DEC as they continue to provide humanitarian aid to those worst affected by the ongoing conflict.

A statement read: "The League strongly condemns Russia's invasion of Ukraine. We call for peace and our thoughts are with all those impacted.

"This action follows a weekend of matches displaying League-wide support for Ukraine. All club captains wore special armbands and fans joined players, managers, match officials and club staff in a moment of reflection and solidarity before kick-off at each game.

"Big screens displayed 'Football Stands Together' against the backdrop of the blue and yellow colours of the Ukrainian flag. These words were also shown on LED perimeter boards during matches.

"This message of solidarity was visible to fans around the world across Premier League digital channels and via match broadcasts. 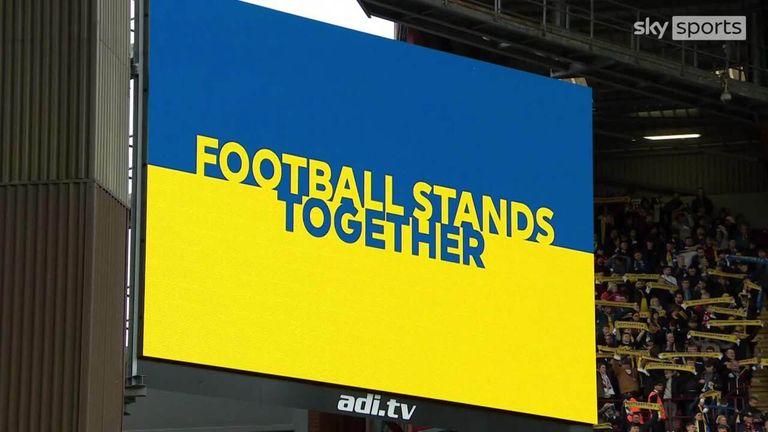 "This is in addition to the numerous ways in which clubs continue to display their support."

The English Football League - which includes the Championship, League One and League Two - is also expected to follow suit in the coming days.

Sports Minister Nigel Huddleston added: "This is absolutely the right thing to do and we fully support the Premier League's decision to stop broadcasting matches in Russia in response to Putin's barbaric, senseless invasion of Ukraine.

"Russia cannot be allowed to legitimise its illegal war through sport and culture, and we must work together to ensure Putin remains a pariah on the international stage."

Last week, the UK Government added the Russian state-owned broadcaster Sberbank to its list of companies to face stringent sanctions, after calls from MPs for English football to take a stand against Russian aggression. Rambler, the Moscow-based TV company that has a contract with the Premier League and EFL to show English football, is a subsidiary of Sberbank.

FIFA announced a temporary change to its statutes on Monday evening allowing foreign players based in Ukraine and Russia to suspend their contracts until the end of June and move elsewhere without penalty.

Unless explicitly agreed otherwise, the employment contracts of foreign players and coaches with clubs affiliated to the Ukrainian federation will be deemed automatically suspended until the end of the season.

Foreign players and coaches in Russia will have the right to unilaterally suspend their contracts until the end of June, should Russian clubs not have reached a mutual agreement to suspend the deal on or before Thursday.

"Players and coaches will be considered 'out of contract' until June 30 2022 and will therefore be at liberty to sign a contract with another club without facing consequences of any kind," the statement from football's world governing body read.

Such players will be able to register in another country even if the registration period in that country is closed, provided they are registered on or before April 7. A club may sign a maximum of two players under this exemption, FIFA said.

FIFA said minors fleeing from Ukraine to other countries due to the armed conflict would be exempt from the rule preventing the international transfer of players before the age of 18.

World players' union FIFPRO and the World Leagues Forum had written to FIFA last week calling for foreign players in Russia to be allowed to unilaterally terminate their contracts without consequences.

Calls for contracts at Russian clubs to be cancelled

While FIFA has confirmed temporary changes, football's authorities have faced calls to cancel the contracts of players registered to Russian clubs, so that they are free to sign for clubs elsewhere.

In England, Nottingham Forest are at the forefront of the idea, and have written to the EFL asking them to take the matter up with the FA and FIFA.

This time last week, FIFA and UEFA announced that Russia's national teams and club sides had been suspended from all international competitions until further notice.

The Russian Football Union quickly announced it would appeal against that decision with the Court of Arbitration for Sport.

Former Norwich manager Daniel Farke resigned from his job in charge of FC Krasnodar on Wednesday, as eight of the Russian club's players - including former France international Remy Cabella and Sweden winger Victor Claesson - asked for their contracts to be suspended.

Forest are calling for emergency amendments to the international transfer system, so that no player is tied by contract to a Russian club when they cannot play for them.

Forest say they don't have any specific players in mind that they would like to sign from Russian clubs, even if the rules were changed, but see it as an important point of principle.

If you want to support the aid effort in Ukraine please donate via the WithUkraine Global Support Fund at: www.withukraine.org