Ukraine had asked FIFA and UEFA to postpone their World Cup play-off with Scotland until June due to Russian invasion; tie had been due to be played at Hampden Park on March 24; Wales FA chief reveals Ukraine want game played in June, and that Wales' fixture against Austria may be delayed

Scotland's World Cup play-off semi-final against Ukraine, scheduled for March 24, has been postponed.

FIFA, world football's governing body, had a call with the chief executives of the Scotland, Ukraine, Wales and Austria Football Associations on Monday where they were verbally told that the game will be moved to June.

However, it is yet to be decided if Scotland will now play friendly internationals on March 24 and 29 instead.

The play-off semi-final was due to be played at Hampden Park on March 24, with the winner going on to face Austria or Wales in Cardiff for a place in this year's World Cup in Qatar.

But now the clash has been postponed owing to the ongoing invasion of Ukraine by the Russian military. Speaking before Ukraine requested the postponement of their play-off against Scotland, Stuart Armstrong said football should take a back seat amid Russia's invasion of Ukraine

Russia had been due to face Poland in their semi-final, but have been thrown out of the tournament by FIFA as a sanction for the invasion.

Meanwhile, Wales themselves are still to be informed about whether their semi-final with Austria on March 24 is to go ahead or not.

The Football Association of Wales (FAW) is aware of all the potential scenarios after several meetings over last five days, but no decision has been communicated to them as yet.

Wales' game with Austria at the Cardiff City Stadium is sold out and plans remain in place for the game to go ahead on March 24.

The FAW is understood to be "hopeful" of some further clarity on the situation on Tuesday.

Shevchenko's message to Russia: You can stop this war 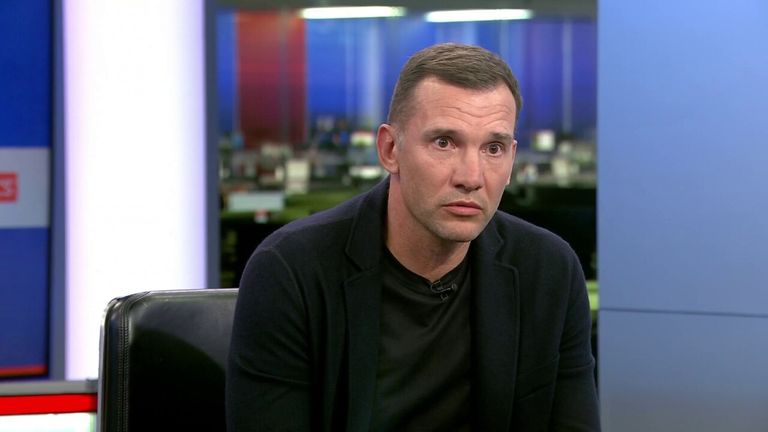 Andriy Shevchenko delivered a powerful message to the Russian people, urging them to play their part in the ending the war

Shevchenko's family have refused to leave Ukraine and the 45-year-old has remained in London during the conflict to help lead the appeal to get humanitarian aid to his country.

"Football doesn't exist for me any more," Shevchenko said.

"I don't think about it. It's not the time for that. I'm not watching anything, any sport, anything.

"All my concentration, when I wake up, I think about how I can help my country, what I can do. I've started to call my parents, my friends, get updates on what's going on in Ukraine.