Port Vale fans invaded the pitch after their side beat Swindon on penalties to reach the League Two play-off final on Thursday night; Robins boss Ben Garner and defender Mandela Egbo accused the home fans of attacking Swindon players; police say they are working with both clubs 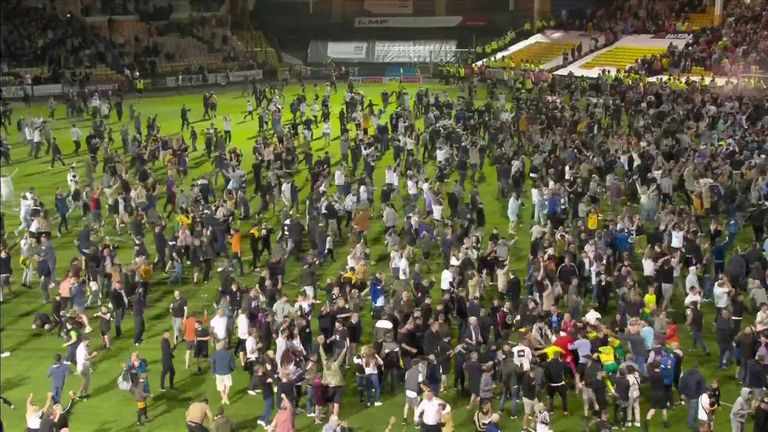 Staffordshire Police say they are working with Port Vale and Swindon after Robins boss Ben Garner reported his players had been "physically and verbally abused" at Vale Park when home supporters invaded the pitch on Thursday night.

Swindon won the first leg 2-1 at home but were beaten 1-0 by their hosts on Thursday night, with Port Vale eventually winning the tie 6-5 on penalties to progress to the League Two play-off final.

The deciding spot-kick was missed by the Robins' Ellis Iandolo, which prompted the home fans to invade the field as the visitors tried to make a hasty exit. Some Swindon players appeared to be involved in confrontations with Port Vale supporters, and right-back Mandela Egbo said he had been attacked as he made his way off the pitch.

A statement from Staffordshire Police on Friday read: "Police attended Hamil Road, Burslem, where a Swindon Town player was reportedly assaulted following a pitch incursion after the conclusion of the game.

"Officers are working in partnership with both football clubs to identify those responsible."

Superintendent Gemma Ward, head of force operations, added: "Staffordshire Police and Port Vale are committed to ensuring that events at Vale Park are safe and enjoyable for everyone in attendance.

"Anyone seeking to ruin this will be firmly dealt with - such actions have no place in our local community. A thorough investigation is now under way."

Speaking to Sky Sports after the game, Swindon boss Garner said: "Players have been physically and verbally abused. I know I've seen it in some of the other play-off games.

"I don't know where we're going as a country. It's absolutely disgusting."

Egbo tweeted: "How you scummy fans get two free shots and only manage a scratch? And I'm supposed to keep my cool - if I react I'm the bad guy right?"

On Thursday, a man was jailed for 24 weeks for the attack.