Manchester United players have come under fire after missing out on Champions League football; Erik Ten Hag will take charge of United next week; Summer transfer window opens June 10 and closes at 11pm on September 1 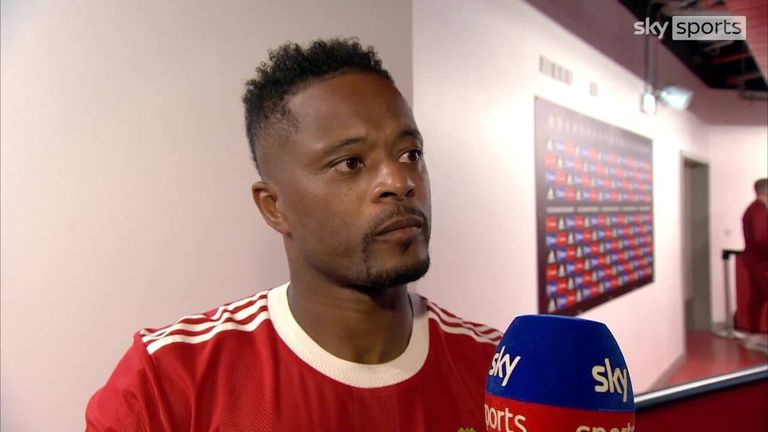 Patrice Evra says Manchester United need to sign players who are committed to the club, and not motivated by money

Patrice Evra believes Manchester United need to sign more players "with character" this summer - and claims a squad overhaul is required to get rid of players who are "sad" at Old Trafford.

United have missed out on Champions League football and will fight for sixth spot on the final day of the Premier League season, with the club going without a trophy for a fifth successive year.

Speaking after Man United's legends lost 3-1 to Liverpool's all-time greats at Old Trafford in a charity game, Evra believes the current crop of players should be feeling grateful that they play for the club, instead of unhappy, with Erik Ten Hag set to take charge next week.

"The current players have been here for so many years, the fans are on [top of] them so it brings a lot of negativity around the club. So we need fresh blood," the Frenchman told Sky Sports News.

"New players? What kind of players? Will these players come for the badge? Or will they come for the money or the fame? I'm more looking for players with character and [want to know] what their reason is for coming to United.

"Of course [we need an overhaul]. It's about time, we need a change. It will be like a dramatic change. I'm not saying 10 players leave and 10 players come in and this will be the solution. But it would be a good solution.

"When talking to the fans, it's almost like a déjà vu. It's the same players they're questioning [as to] why they're playing and why they're here. I think even those players don't want to be at United anymore because I can see those players are even feeling sad, when you should be feeling blessed and grateful wearing that jersey.

"So there's something wrong. I hope those players that don't want to stay just leave the club and the new players come in and fight for the badge."

New manager Ten Hag will watch his United squad in the flesh for the first time on Sunday when the club take on Crystal Palace in the last game under interim boss Ralf Rangnick.

Evra accepts that Ten Hag may struggle to get United back to the upper echelons of English football straight away, but believes the club need to make a collective effort to stop their recent rot.

"I don't [have] a lot of excitement about a new manager - I'm excited to see which team we're going to build," he added. "I'm going to be excited when we're fighting to win the league and going back into the Champions League.

Ten Hag is Manchester United's chosen candidate to lead the club into the new era and he must waste no time in tackling the pressing issues at Old Trafford.

Ten Hag has forgone his plans to be part of Ajax's post-season trip as he looks to tackle the mountainous task that awaits him at Old Trafford.

Interim manager Ralf Rangnick has warned wholesale changes are necessary at United and, as Ten Hag prepares to start his new role, Sky Sports takes a look at some of the key areas the Dutchman must rectify...