It's shaping up to be a busy summer transfer window for Manchester City, but could they be in the market for Napoli defender Kalidou Koulibaly to add to the acquisition of Nathan Ake?

That was one of the topics of debate on the latest edition of the Transfer Talk podcast, where ESPN football expert Gabriele Marcotti joined Sky Sports News duo Pete Graves and Dharmesh Sheth to discuss the latest major developments from the summer window.

City are looking to sign as many as four more players during the transfer window and want their business done by the start of the new season on September 12.

Despite the £41m capture of Ake from Bournemouth already this summer, defenders remain the priority but deals for both a left-back and a second centre half - most likely Napoli's Koulibaly - are still some way off. 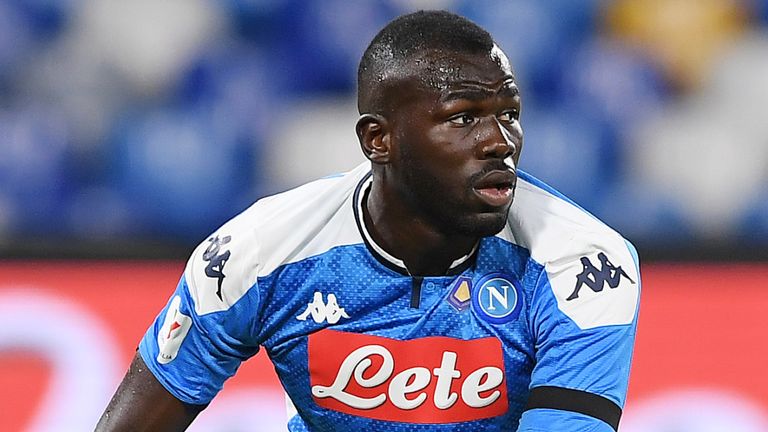 "Napoli feel that the only other club other than City that could come in for him potentially is Manchester United. They don't feel there is anybody else in Europe who has the means to make them the kind of offer they would accept."

European football expert Marcotti believes the Senegal international has the attributes to replace Vincent Kompany, but believes City may find competition from their neighbours.

"Koulibaly is an exceptional defender. He's an intelligent player and a great leader. He has a lot of the Kompany-type qualities that you would want.

"He would also cost a fortune because from Napoli's perspective, they're at the stage where they don't need to sell him. They would have to get an offer which would be hard to refuse. There was talk of a non-official agreement where if they got an £80m or £90m offer, they would let him go. But that is a ton of money to spend on a guy who is 29 years old.

"It would mean Pep Guardiola would be happy to bring a guy in who would be a 'plug-in and play leader'. The only thing I would say about Koulibaly is that on the ball he's not bad but he hasn't got the kind of central midfielder skills that Guardiola seems to like in his centre-backs.

"The only other club that could come in for him is Manchester United, but Napoli don't feel there's another club in Europe that would be able to afford the kind of fees required."

Sky Sports reporter Sheth believes Guardiola could offload at least one centre-half in order to facilitate a move for Koulibaly.

He said: "I can't think of a window that's gone by where he's not been linked with a move to England but it's not yet materialised. You just wonder if this window is when that move because a reality.

"With Nathan Ake having arrived, the doubts will only increase over John Stones and Nicolas Otamendi and it's looking more and more likely that they won't be at City next season the way Guardiola is looking to reshape that squad.

"There could be even more movement as well in that defensive area as Eric Garcia rejected a new contract offer. He has entered the final 12 months of his current deal, but has the arrival of Ake forced him to think his future lies elsewhere?"

Would Lautaro be a good replacement for Aguero?

Meanwhile, speculation remains surrounding the future of Inter Milan striker Lautaro Martinez - despite his agent Carlos Beto Yaque admitting he sees no substance to reports of a move to Barcelona, describing the link as "more in the media than real life".

The La Liga side had been hoping to strike a part-exchange deal for Neymar that would see Antoine Griezmann join Paris Saint-Germain, while Inter striker Martinez has been their top target following an impressive season in Serie A.

The player's £98m (€110m) release clause expired on July 7 with Martinez currently focused on helping Inter in their quest to win the Europa League - and our panel of experts believe City could prove a more likely destination, given Guardiola's need to look towards life after Sergio Aguero.

"Barcelona have liked him for a long time but it seems that interest is for now at an end," Sheth continued. "With the financial impact of Covid, the Barcelona president Josep Bartomeu said the club wouldn't be pursuing him now. His current deal at Inter has three years left to run, but even the richest clubs are not immune to having to make budget constraints.

"Barcelona have made losses during the pandemic of a reported €200m, and you just wonder if Barca's stance on Martinez has opened the door to a club like Manchester City. City are interested in Martinez and Guardiola is looking for a long-term replacement for Aguero.

"He's 32 years old now and has now entered the final year of his contract. He's spoken publicly before about his desire to finish his career in Argentina so City are no doubt keeping an eye on that situation."

The Athletic have reported City had enquired about the availability of Atletico Madrid's Joao Felix, who has endured a difficult start following his £113m move last year from Benfica.

Marcotti believes it would be unfair to compare Martinez with his compatriot, but would see the value in City targeting the striker as an option when Aguero does depart the Etihad.

He said: "He's had a very good season, although he did tail off a bit since the restart - possibly because he was unsettled by the rumours. If you compare what Aguero was doing when he was Lautaro's age, at 22, Aguero was well ahead. It doesn't mean Lautaro won't improve, and I don't think we're talking about a player of Aguero's quality yet but players develop at different speeds.

"I don't think Inter right now are especially worried. The suggestions are that the release clause has now expired. That doesn't mean you can't do a deal, but if City have approached Lautaro's people then they've done it very quietly as that hasn't bounced around at the Inter end. Inter's intention is to keep him for another season… there's talk of a new contract and a pay rise but City certainly need to start thinking of a succession plan to Aguero."