Saha: "There are so many profiles for forwards, and it was very competitive at United, but I knew I had something that other players didn't have" 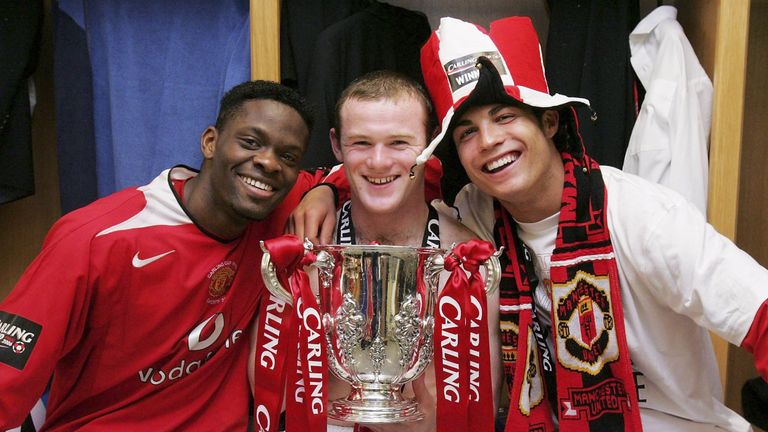 In the latest Off Script, former Everton stars Louis Saha and Tim Cahill discuss the differing roles of strikers in the modern game

In the latest Off Script, Louis Saha and Tim Cahill talk about the role of forwards in modern football, and whether every striker must score at least 20 goals a season.

Saha, who enjoyed a fine career in England with Fulham, Manchester United, Everton, Tottenham and Sunderland, is routinely praised by former team-mates for his influence on a team outside of goalscoring.

Sky Sports' Gary Neville recently said Saha is one of the best forwards he ever played with and against, although his goalscoring record at United was around one in every three games.

So, in this day and age of front threes, false nines and goalscoring wingers, we asked Saha and his former Everton team-mate Cahill whether the traditional idea of a forward scoring the majority of a side's goals needs a rethink...

'I had something different'

Saha scored 28 goals in 86 Premier League appearances for United, and then 27 in 97 for Everton. His worth to Sir Alex Ferguson eventually resulted in Ruud van Nistelrooy's departure from Old Trafford in 2006.

The Frenchman explains how his qualities differed to the traditional No 9, and how his link-up play enabled the likes of Cristiano Ronaldo and Wayne Rooney to develop...

"There are so many profiles for forwards, and it was very competitive at Manchester United, but I knew I had something that other players didn't have. I was more of a linker, so I would bring people into the game, and someone who can adapt to different games.

"It's something that is up to the squad, and the philosophy of the team, and the way Sir Alex Ferguson was playing. I understand I had my qualities, and I could embrace that every game.

"When you have players like Cristiano Ronaldo and Wayne Rooney, young but with so much quality, and sometimes when you have a character who is asking for the ball all of the time and asking for the attention, it was maybe a bit harder for those youngsters to develop.

Was Saha good for Ronaldo?

"So I had that profile, to bring them a bit more together, and that was the decision of the manager, and it was something I was very proud of."

'We called him the King'

Just how beneficial were Saha's qualities? One man who would know is Cahill, who played with Saha for three-and-a-half years at Goodison Park, and who himself transformed from a midfielder to a forward during attacking phases.

"When Louis first signed for Everton the players were so excited because we knew how he could link up on the pitch, with pace and power. We called him the King at Everton, and I always saw Louis as someone who would create space.

"Wherever he was, he would attract two defenders. So I could always benefit off his movement. And I couldn't tell you if he was right foot or left foot, he was confident on both. We had [Marouane] Fellaini here at the time, sometimes he wouldn't score too many goals but he would bring so many players into the game.

"We were midfielders, who transitioned into strikers. We couldn't afford to buy too many players so we had to make do. Back then, we played for the team, we didn't play for ourselves, so we had to fill holes and fill gaps. If you don't score, it doesn't matter, because the fans knew what the badge meant to us.

"But I don't mind selfish strikers. The best thing about them is you know they're going to score, you have to feed them and give them that appetite for them to finish. Understanding the players' attitudes and emotions, and playing to them. That's how you win and lose games.

"But the defending was just as important as the attacking. We took great pride with our set plays; the way we set up, the line, the distances in-between players. That was the ethos: defend just as well as you attack."

'They were animals in front of goal'

Saha says watching the likes of Van Nistelrooy and Cahill forced him to go the extra mile, and gave an insight into how obsessed they were in front of goal...

"When I see Tim and his career, and people who work hard. I was a striker, but I was more a forward. Every training session we had, Cahill was obsessed in front of goal. He wanted to connect with the ball in a certain way, he wanted to make sure that he took every opportunity. He had to work really hard, and had to be really focused. You have to have that drive and commitment, which isn't easy to teach.

"What happens in life is you have experiences to make you realise you have to go the extra mile, have extra concentration. These things came later, and I was helped by training sessions I had with Ruud van Nistelrooy or Tim, these guys were animals in front of goal.

"When I saw this, I thought: 'If I don't do this, I'm not going to play.' That's the actual standard that these guys showed me in front of my eyes, week in, week out.

"There are few players you cross in your career, Yakubu had it too, the ball would also just come back to them always, I don't know why! This is a special thing. For me, it's a mojo, that makes you do extra things without feeling the pain. When these things go, it's hard."

Everton runs in the family

With Tim Cahill's 14-year-old son, Shae, joining the Everton academy this month, the Australian explains what advice, and more importantly mindset, he will look to impart....

"It's a very proud moment for me as a father. The biggest thing for me retiring was for my children first of all, and my son Shae is fortunate enough to be part of the Everton Academy.

"For me as a father, it's more about me helping him follow his dreams; he'll understand the pitfalls, and the dedication and sacrifice he needs to put in, but low and behold it's a great platform for him as a young man.

The journey is just about to begin @shaetc17 Cherish this moment because this is all the hard work that you have put in up to now. I'm always here to help you follow your dreams but the dedication and sacrifice is all down to you. So proud of you and look forward to picking you up when your down, not just praising you when things are good... welcome to the tough world of being a footballer my man. Time to work harder now and most importantly enjoy the process 🥊😂

"The big thing for me is simplifying it for them, helping them understand the concept of being a footballer, the dedication involved and your mindset. What you put in is what you get back. Even if you don't see the rewards, which you won't as a youngster, it's all about the growth and maturation.

"But Shae's application to training, and not only training but to school, will set him apart. For me, I focused on the basics, and when you have so many eyes looking at you, if you do the basics well, after that we'll see where it takes him.

"But there's no pressure from me as a father, but when you choose to be a footballer, that's a responsibility you choose, and if you don't, there are levels you can play at because England is such an amazing place to play football."