FIFA urges competition organisers to use 'common sense' if players show support for George Floyd, after Bundesliga players were cautioned over weekend

Liverpool, Chelsea, Leicester and Newcastle players have all taken a knee in a show of support for the Black Lives Matter movement, following the death of American George Floyd.

A number of Liverpool players, including James Milner, Virgil van Dijk and Andy Robertson, tweeted pictures of the squad on one knee around the centre circle at Anfield on Monday with the message, 'Unity is strength #BlackLivesMatter'.

The squads at Chelsea, Leicester and Newcastle followed suit, after footballers Marcus Rashford and Jadon Sancho had both called for "justice" over Floyd's death, which has led to protests across the United States.

"It is something where we want to use our position to express that we are living in a world where we have to try to improve it for the future, to be a better world with more love, without hate," Cezar Azpilicueta told Chelsea's official website.

"We have seen recently the result of racism and we see every day that that kind of hate has to be eradicated from society, and we have to play our part."

Manchester United forward Rashford said society is "more divided than ever" in a powerful anti-racism message on Monday.

The 22-year-old wrote on Twitter: "I know you guys haven't heard from me in a few days. I've been trying to process what is going on in the world.

"At a time I've been asking people to come together, work together and be united, we appear to me more divided than ever. People are hurting and people need answers.

It follows England team-mate Sancho revealing a message calling for "justice" after scoring for Borussia Dortmund on Sunday.

Sancho put Dortmund 2-0 up 57 minutes into their Bundesliga match against Paderborn, before removing his jersey to reveal an undershirt with a message reading "justice for George Floyd".

Sancho, who came through Manchester City's academy before moving to Germany in 2017, and team-mate Achraf Hakimi were both shown a yellow card for removing their shirts during the tribute.

But, FIFA has since released a statement urging competition organisers to use their "common sense and have in consideration the context surrounding the events" if a player shows their support for Floyd.

FIFA President Gianni Infantino added: "For the avoidance of doubt, in a FIFA competition the recent demonstrations of players in Bundesliga matches would deserve an applause and not a punishment.

"We all must say no to racism and any form of discrimination.

"We all must say no to violence. Any form of violence."

Sancho, who was part of the England squad that was subjected to sickening racist abuse in last year's Euro 2020 qualifiers in Montenegro and Bulgaria, went on to score a hat-trick in the 6-1 victory. 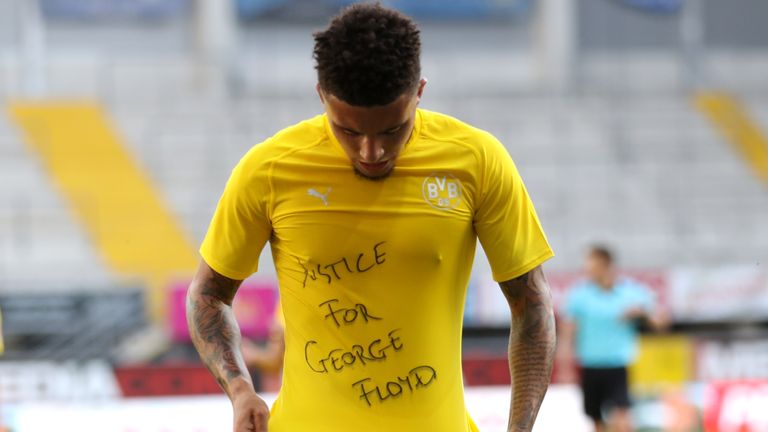 Another Bundesliga player, Borussia Monchengladbach's Marcus Thuram, went down on one knee after scoring earlier on Sunday in an apparent tribute to Floyd.

Thuram, the son of 1998 World Cup winner Lilian Thuram, briefly accepted the congratulations of his team-mates during the 4-1 win over Union Berlin, before dropping to his knee for five seconds with his head bowed.

Liverpool striker Rhian Brewster, who like Sancho was part of the England squad that won the 2017 U17 World Cup, highlighted the urgent need for change.

Brewster, who has spoken previously of suffering racist abuse on the field, wrote on Twitter and Instagram: "This is way deeper than just pointing out who's staying quiet and who's speaking up.

"Unfortunately for us black/brown people etc, this is a real life & everyday occurrence in so many different ways. For years & generations we've been screaming out for change and to be heard yet the pain continues..."

Formula One world champion Lewis Hamilton posted #BlackLivesMatter to his 5.7m Twitter follows, which featured a video of a young black American girl in tears about inherent racism in society.

Tennis player Serena Williams tweeted Nike's powerful 'Don't Do It' video along with the message: "Don't pretend there's not a problem in America".

Kick It Out urges all players to kneel for Floyd

Kick It Out chairman Sanjay Bhandari has urged all players to take a knee for Floyd because "we're all hurt by racism".

Kick It Out chairman Bhandari told the Guardian: "If you score a goal and take a knee could everyone do that? Not just the black players, the white players too, everyone.

"Every player should do it. It should be teams doing it... They could all take a knee. Racism's not about black players or brown fans, it's about all of us. Racism corrodes society and we're all hurt by it."