"It's actually a very physical game, very similar to the Premier League, so you take the best from the situation"

For Aston Villa's Douglas Luiz, life in Rio's Nova Holanda favela brought a unique challenge. Like many of Rio's favela communities, crime and violence is rife, but so too is creativity and spirit.

Above all, Brazil, Rio and its favela residents have a weakness for football. Tiny pitches sit like amphitheatres, surrounded on all sides by shacks wedged into the landscape. Space is at a minimum, but small playground pitches are carved out as a priority, taking centre stage for a community where football is the lifeblood.

Some residents will leave and make a name for themselves outside. Before they do, life is fierce, and the football mirrors that. The favelas produce streetwise, physical footballers, a trait which compliments the samba technique we usually associate with Brazilians.

Luiz, a central midfielder with that technique and brawn, is one of those.

"Obviously in that situation there is a lot of football," says Luiz. "It's actually a very physical game, very similar to the Premier League, so you take the best from the situation.

"There are many of us from these types of communities. It just shows that I am not the first one to succeed from this kind of situation. But now we have to look for the future, take positives from that, and leave behind a good legacy.

"I am proud to be from the favela, or 'community' as we say, of Nova Holanda. Especially because when people think of communities of favelas such as that, they think negative things, bad things, but in fact there are many talented people there, a lot of good talent.

"And not just for football; we also have music, artists, and for that reason I am very happy to be representing my community, it is an honour. Sure, there are difficulties there, but if anything it shows that with a bit of effort and despite those difficulties, you can still succeed."

Luiz, still only 22, has had an unorthodox career. Having spent four years at Vasco da Gama from the age of 14, he moved to Manchester City in 2017 and was immediately loaned to sister club Girona in La Liga.

He was due to return in 2018, but was denied a work permit and went back for a second season at Girona, much to Pep Guardiola's frustration. Last summer, Villa jumped in, Luiz was able to gain a work permit, and the £15m deal with City of course included a buyback clause.

The roadblocks will have bothered Luiz and in particular City, who saw him as an understudy and potential future replacement for compatriot Fernandinho. But disruption is nothing new to Luiz; he would sometimes be absent or late for Vasco training because of police restrictions in the Nova Holanda following incidents. 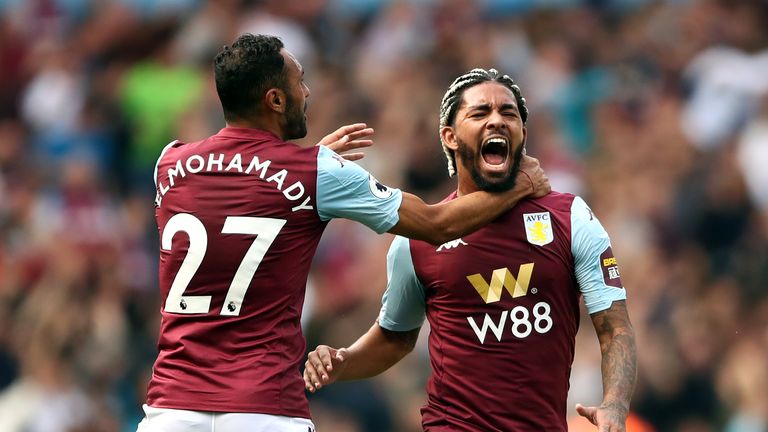 You will always have those kind of difficulties, whether it be a shooting, some sort of fight, some sort of disagreement or a police operation. But I maintained my focus, and despite those difficulties I continued

"Obviously in the community where I am from, you will always have those kind of difficulties, whether it be a shooting, some sort of fight, some sort of disagreement or a police operation. But I maintained my focus, and despite those difficulties I continued.

"It's just another obstacle, and we all had obstacles in our life, you just have to get through that. I'm happy and honoured to be representing that.

"I think it's many things that prepares you for life like that. It was obviously a massive learning process for me. I saw the bad, and I chose not to commit those mistakes and not to make those errors."

Guardiola's frustration only fed Villa's excitement last summer. Luiz has had hiccups; a mistake on his home debut led to a Bournemouth goal in August, and he's battled for time both beside and ahead of Marvelous Nakamba.

Villa have too often left a large welcome doormat for oppositions in front of a wide open defence leaking goals, but it's clear Luiz has raw talent and bags of potential, plus scope to bulk up physically. Earning his first cap in October, he represents part of the new-look Brazil team, five-time World Cup winners but with just one semi-final appearance in four tournaments.

Manager Tite has called up 16 uncapped players since September 2019 alone, but more familiar faces Richarlison and Gabriel Jesus, both from favelas themselves, starred in Brazil's 2019 Copa America victory on home soil. It was much-needed after the memory of tears lingered from World Cup 2014, and Luiz insists the archetypal Brazilian footballer still has that air of joy, but kneaded with a physicality to make a perfect batch for the Premier League.

Brazilians in the Premier League

"Flair, creativity, guts, physicality. All of those words describe the Brazilian players. Brazilian players are really a master of their own talent. There have been some incredible players, and it is that natural style, natural feel, the happiness, the dribbling, the physical features.

"Ronaldinho, in my opinion, was the best at all of those things. He was able to take that happiness, that physicality, and that's what makes Brazilian players different."

Luiz has not forgotten his roots at Nova Holanda, which sits packed beside the major BR101 highway in Rio, nor does he see his success as a case of 'escaping'. His ties are strong, recently providing care packages for the area during the COVID-19 crisis.

Above: Luiz donated care packages to those in need in Nova Holanda during the coronavirus pandemic

"I think it's the least I could do for the community where I come from. I am living what is deemed to be a very good life, so I can at least help with their struggles.

"It's not just there, people are struggling throughout the world, so I think we need to help as much as we can. If everyone does a little bit for the place they are from, or even any place that has touched their hearts, that's always good. I still keep contact with my community, and it's not just now that we're in a particularly turbulent situation. I always like to keep contact."

Still raw, for now it is about development for Luiz. The Premier League is the best platform to showcase his potential, and he's had to learn fast in a team fighting for survival with 10 games remaining.

"I think this is one of the best moments in my career. I'm trying to work my hardest and to make sure I enjoy the time I'm having here. I'm obviously very thankful to Aston Villa for their efforts and what they did to have me in the Premier League, and I will always be grateful to them for that.

"I think the club will be happy too because I am here and I believe I am helping. That mutual interest equals happiness and enjoyment for everyone."