Mourinho after 1-0 defeat to Everton: "Lazy pressure. Lazy pressure up front, that is what I am saying, and that creates unbalanced situations for the rest of the team" 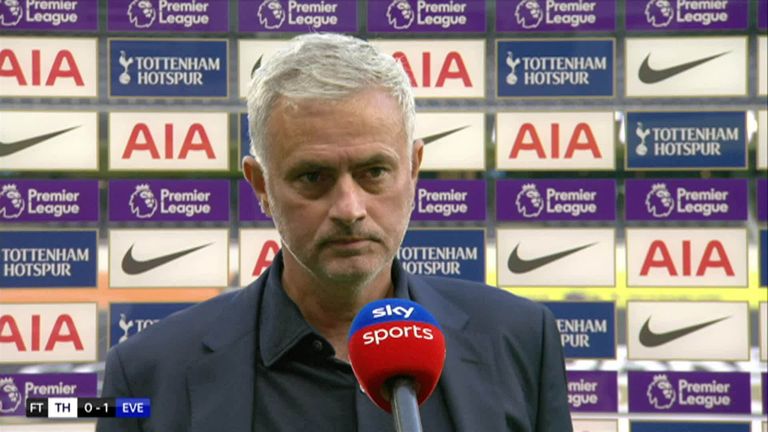 Jose Mourinho was left frustrated with Tottenham's inability to press

Jose Mourinho criticised his Tottenham players for "lazy pressing" in the defeat to Everton and questioned their fitness.

Mourinho's Tottenham were "lifeless, flat" and "walking around the pitch sulking" for large chunks of the second half, said Sky Sports' Gary Neville on commentary, with Spurs registering just nine tackles to Everton's 18, and Harry Kane touching the ball only twice in the Everton box.

Mourinho could not hide his frustration with the performance, highlighting his team's lack of intensity without the ball in the final third as a key component in the defeat.

He told Sky Sports: "The struggle started in the way we pressed or, I will say, in the way we didn't press because our pressure up was very poor.

"I would say it was lazy pressure and when you have lazy pressure, you don't press and you let opponents build from the back and then they have players with incredible quality, which is not just Everton, it's almost everybody in the Premier League. When you let them play from the back then they are comfortable with the ball."

He added: "Lazy pressure. Lazy pressure up front, that is what I am saying, and that creates unbalanced situations for the rest of the team.

"I could also feel that some of my players are not fit. Matt [Doherty] was struggling to play the way he plays and the way you want him to play, as an example.

"We also had other players that were a little bit in trouble from a physical point of view. Two very strange pre-seasons for some and in other cases not even a pre-season, but congratulations to my dear friend Carlo and the Everton boys."

Dele Alli was hooked at half-time by Mourinho after an ineffective performance - a decision the Spurs boss confirmed wasn't enforced by an injury with Moussa Sissoko replacing him.

"They were playing with only one pivot. Allan was in that position and Gomes and Doucoure were pressing high. There was lots of space behind this pressure, there was lots of space to play in behind in these areas and I needed more in there, which were also not able to get in the second half."

Everton's winning goal came via a left-wing set-piece that was met superbly by Calvert-Lewin, who got above Eric Dier, and his bullet header found the top left corner, leaving Hugo Lloris rooted. Mourinho was seen complaining that the free-kick had been taken four yards ahead of where the foul took place, but his protests were ignored by the officials.

"In the second half they scored the goal, which I think was a bit strange," Mourinho added.

"But I don't want to stay too much on these things."

Jose: We had positive Covid cases

In his post-match press conference, Mourinho revealed that Spurs had had positive cases of coronavirus in the squad, and explained how that and other factors had impacted them to the point where pre-season became "difficult".

"Harry Kane trained with us once. I am not going player by player. For different reasons, many of our players didn't have proper pre-seasons.

"We had cases of positive Covid, we have the right not to say which players, but we had players, we had other players in quarantine due to proximity with positive players. We had a player in quarantine because he was on holiday in a country which the government quarantined, we had national teams where many of them went to their team so it was a difficult pre-season.

"I couldn't expect them to be sharp, intense, agile. But I was expecting much more individually and collectively. It disappoints me, and that is where I have now to work. The players who didn't have pre-season, we don't have now the possibility to give them a pre-season.

"But we have a lot of matches now to play consecutively and we have to use these matches, not just to win them and the knockout ones are obviously decisive ones with everything decided in 120 minutes or even penalties, and try to use this to improve the form of some players because some of them were really in trouble."

"There are a few problems, if we are honest.

"Matt Doherty, for example. You sign a player who has played all his career at Wolves as a wing-back and then you play him in a back four. For some, that might not seem a lot or that much of a difference but it totally is.

"In midfield, there was hardly any creativity. I didn't see anyone getting hold of the ball and playing the game at tempo.

"This is only week one and we need to be careful. Højbjerg didn't have his best game, but it is his debut and l don't want to jump into his nightmare. When he gets his fitness and plays more games, l hope he will improve. But when l look at what Spurs need, is he the sort of player they need? It looks like it is very easy to play against that Tottenham midfield in every aspect."

Tottenham now go to Lokomotiv Plovdiv on Thursday in Europa League qualifying at 5pm, before a trip to Southampton at midday on Sunday.

Everton host Salford City in the Carabao Cup second round on Wednesday evening, live on Sky Sports Football at 8.15pm, and then host West Brom at 12.30pm on Saturday in the Premier League.