Jose Mourinho tells Sky Sports: "City is a fantastic team that lost against a team that strategically was very good"; Plus Pep Guardiola feels his Manchester City side are not playing bad as they sit 10th in the Premier League with just 12 points from eight games 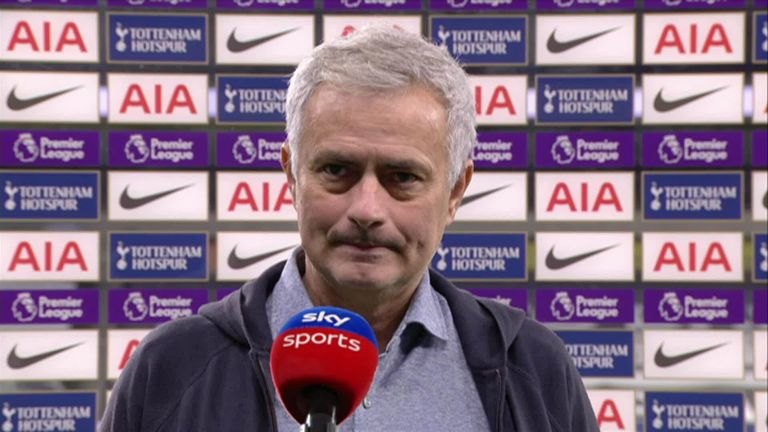 Jose Mourinho said his "amazing" Tottenham beat Manchester City on strategy as a vintage show from the Portuguese boss sent his side top of the Premier League.

Spurs were stubborn and clinical, defeating City 2-0 thanks to goal from Heung-Min Son and Giovani Lo Celso in either half, with Mourinho's side registering just four shots on goal to City's 22.

The result means Spurs finish a day top of the Premier League table for the first time since August 2014, and Mourinho put the victory down to a superior strategy over his old enemy Pep Guardiola.

He told Sky Sports: "For me, I prefer the players to speak because they are the ones, they were fantastic, they gave everything. They follow a strategy and football sometimes, more than ever, strategy plays an important part. They were amazing.

"It was very important to respect [City] and not to forget the team they are. If we follow people speaking about them as being not as good as before, if we follow the fake table because they have one match in hand, we would probably be playing in a different way. City is a fantastic team that lost against a team that strategically was very good but City is still City. 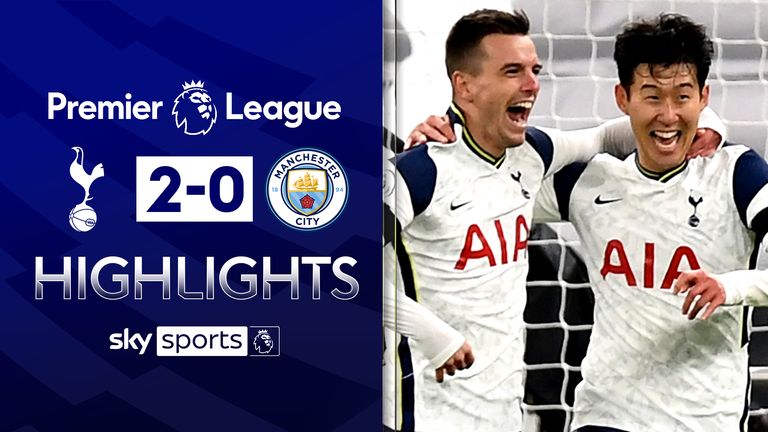 FREE TO WATCH: Highlights from Tottenham's win against Manchester City in the Premier League

"Of course, you have to score and we didn't have many chances. You need a top goalkeeper to make crucial saves in crucial moments, but we knew they would have more of the ball but we would be very comfortable playing that way because we knew the way to do it."

Jose: Kane can change the way we view strikers

Mourinho has been questioned in the past for his use of Spurs' talisman Harry Kane, with suggestions his approach and style of play means the striker scores fewer goals.

But Mourinho reserved special praise for Kane, who was man-of-the-match on Saturday and picked up his ninth assist for the second goal, more than any player in the Premier League.

"Harry Kane represents the spirit of all the other guys, the way he works for the team is the way all the other ones do it," he told Sky Sports.

He then said in his post-match press conference: "He's a fantastic player. Maybe he will be responsible for everyone that loves football to change the way people look at a striker. The tendency is to see how many goals a striker scored - you are as good as how many goals you score.

Toby Alderweireld went off with a worrying groin injury late on, and Mourinho predicted the Belgian defender will be sidelined for a while.

Asked if it looks a long-term injury, Mourinho said: "I would say so. I just feel sorry for Toby after a fantastic performance. He has an important injury, it is the injury of the fatigue, it is the injury that happens."

Redknapp: Jose has me convinced Spurs can win things

"Spurs have had some great teams over the years, seen great footballers, beautiful footballers, but they've not won a thing. If Spurs fans have to take watching that style to win trophies, they will take that.

"Mauricio Pochettino built a lovely team - what did they win? Zero. I wasn't sure Jose Mourinho could do it at Spurs but he makes players work so hard.

Pep: We struggle to score - 10 goals not good enough 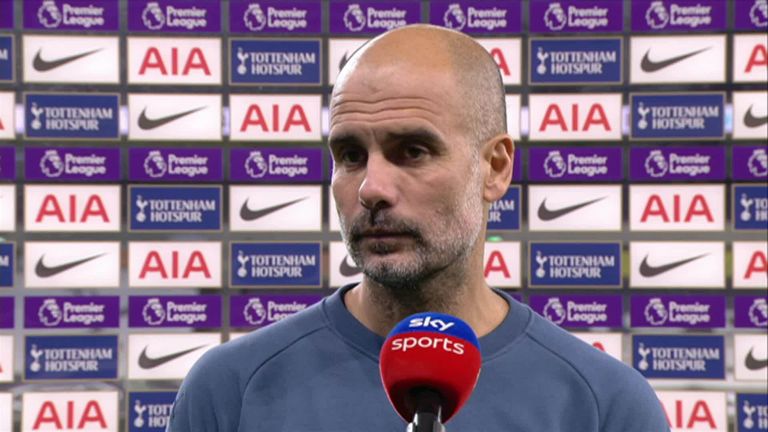 Guardiola's City sit eight points adrift with a game in hand, and have noticeably less firepower this season, with Sergio Aguero remaining on the bench following his hamstring injury.

The City boss says his side simply must start scoring and winning before they are cut adrift in the Premier League title race.

"[Spurs] are top of the league so obviously they are more contenders than anyone else right now. There is a lot of points to play for, we are eight points down with one game in hand. But there are lot of teams in front of us. We have to start winning or it [winning the league] will not be possible.

"We have to try and win games. We are not far, far away but we struggle to score goals. Ten goals in eight games isn't good enough."

He earlier told Sky Sports that the game panned out perfectly for Spurs' approach, and said it was difficult to break down a side sitting so deep after taking an early lead.

"The perfect scenario for them, we concede a goal after five minutes, we knew Kane would drop, (Steven) Bergwijn and Son run in behind, we could have done better.

Tottenham now host Ludogorets in the Europa League on Thursday at 8pm, before going to Chelsea next Super Sunday at 4.30pm, live on Sky Sports Premier League.

Man City are at Olympiakos in the Champions League at 5.55pm on Wednesday, before hosting Burnley in the Premier League at 3pm on Saturday.