England's most successful clubs in history go head to head divided by just three points at the summit, live on Sky Sports this Sunday - but where could the game be won or lost?

Manchester United have hit a scintillating streak of form and go into the showdown top of the pile for the first time after New Year's Day in a season since they last won the title under Sir Alex Ferguson.

So, with the two clubs in polarised form, what other factors could determine the key battlegrounds?

Goals, shots and through balls

The general narrative appears to suggest United are fortunate to go into this fixture at the summit, or even close to it, but they certainly deserve to be among the higher rungs - ranking second for goals scored and shots on target, behind only Liverpool.

Both clubs have scored around six goals more than expected in the Premier League this season, according to xG.

Both sides are also among the most prolific for threading balls between defensive lines, so expect intricate passes or exchanges with runners and breakaway attacks this weekend.

As has been the case for several seasons, Liverpool's top scorers are Mohamed Salah and Sadio Mane, while midfield maestro Bruno Fernandes and winger Marcus Rashford lead the way at United this term.

Rashford's late winner at Wolves was just the latest example of United striking in the final moments of games this season. They also scored stoppage-time goals to grab points against Southampton and Brighton. The graphic below also shows how they have scored 21 of their 34 goals in the second half, equating to 62 per cent.

That is not the case for Liverpool, who have scored in equal measure during both halves. However, both teams have been prone to conceding early this season.

Klopp's side have conceded 14 of their 21 goals in the first half - although the majority of these came during the opening eight fixtures and they still managed to secure wins in most of those games.

United have become notorious for battling back after falling behind during this campaign, having shipped 14 of their 24 goals during the opening interval - but that trend has also eased off in recent weeks.

So both teams have become more watertight, but Ole Gunnar Solskjaer will be hoping his side maintain the habit of netting second-half winners on Sunday.

Liverpool's main attacking threat comes from the flanks, via full-backs Andy Robertson and Trent Alexander-Arnold, along with wide forwards Salah and Mane.

The graphic below reveals how Jurgen Klopp's side pose danger from corners and crosses, with the majority of assists coming from wide angles - having also notched three assists from set-pieces this term.

Interestingly, this is one area where the teams' styles contrast starkly: Liverpool have attempted a league-high 399 crosses - but United rank in a lowly 18th, with only 249.

United typically pose danger down left flank with Rashford, who started down the right channel against Burnley on Wednesday. But the full-backs, especially Aaron Wan-Bissaka, are typically less involved in attacks than their counterparts and the inverted wide forwards look for central inroads, as do Salah and Mane for Liverpool.

However, that approach could be tweaked by increasing the number of crosses when Edinson Cavani plays as the central striker, to utilise his predatory poaching skills in and around the six-yard box.

But the source of United's primary goal threat is from direct balls upfield, with Solskjaer likely to encourage Fernandes' long passes through defensive lines - while Paul Pogba has also had a growing impact from the left and centrally.

Much has been made of Liverpool's injury-ravaged defence, which has forced midfielder Fabinho into a regular centre-back role - and he was partnered at the back by fellow midfielder Jordan Henderson in the 1-0 defeat at Southampton on Monday.

In contrast, United have a selection dilemma at the back with Eric Bailly excelling alongside Harry Maguire in recent weeks, so Victor Lindelof may struggle to reclaim his starting berth if he recovers from a back injury in time, while Anthony Martial and Nemanja Matic are also doubts.

Liverpool are missing first-choice centre-back pairing Virgil van Dijk and Joe Gomez for the remainder of the season, in addition to Diogo Jota and Konstantinos Tsimikas until next month, while Joel Matip and Naby Keita also remain doubts.

Liverpool's spate of injuries has potentially contributed to their recent dip in form and United will look to expose the centre-back pairing and could impose early pressure, after Southampton successfully deployed that approach last week.

Klopp stoked the fire ahead of the showdown with United after his side were denied two penalty appeals in the defeat at St Mary's: "I hear now that Manchester United had more penalties in two years than I had in five-and-a-half years."

This season, both teams have been awarded an above-average number of spot-kicks, with United (six) edging Liverpool (five).

Conversely, Liverpool's makeshift defenders are prone to the occasional rash challenge to concede penalties, while United have only conceded one fewer themselves.

A similar narrative plays out for making general errors: both clubs are among the most error-prone this term - being among an unfortunate group of four clubs that have committed three or more costly mistakes this campaign.

So, with both sides prone to fouling and being fouled in the box, spot-kicks could be on the cards.

Unsurprisingly, the main culprits for errors are the defenders, with Bailly being caught out twice during his limited game time this season, of which one resulted in his side conceding a goal in the 6-1 defeat against Tottenham in October.

Liverpool have dominated games more than any other club this term with average possession of 64.5 per cent, ahead of Manchester City. In contrast, United's counter style is reflected by their 53.4 per cent share ranking down in seventh.

Klopp's side have also achieved vastly superior possession against 'big-six' opposition this term, including a staggering 75.8 per cent against Spurs, 66 per cent with Arsenal and 61.3 per cent against Chelsea.

Conversely, United have only managed to edge 'big six' teams by the finest of margins, against Arsenal and Chelsea, and were inferior in the humiliating defeat by Tottenham and in the goalless draw with Manchester City.

In terms of where the respective teams typically hold that possession, Liverpool primarily play in central areas just inside their own half or down both flanks inside the opposition half.

United have similar concentrations but play across the width of the pitch inside their own half, with hotspots of activity in attacking areas down the left flank.

Unsurprisingly, the graphic below identifies Liverpool full-backs Robertson and Alexander-Arnold and Manchester United talisman Bruno Fernandes as the main creative threats and prominent passers - who rank in respective order for attempting passes into the opposition box.

Liverpool have eased off from the league-topping intensity exerted during Klopp's early days at the club - a mantle taken up by top-flight returnees Leeds - but they still rank seventh with an average of 111km covered per game this season.

The numbers also provide more evidence of United's countering style, with their average of 108km ranking down in 15th.

In terms of sprints, the two clubs are strikingly similar, in that both look to burst from the blocks through defensive lines frequently, with Liverpool's average of 138 per game edging United's by one solitary sprint.

The real grafters putting in the hard yards for Liverpool include Roberto Firmino and Robertson, while Harry Maguire and Rashford cover considerable distance for United - with the latter also clocking the fastest speed on 35.3km/h.

Off the ball, Firmino has completed a league-topping 751 runs, underlining how his work for the team is often underestimated, while Mane also excels in this area.

A sustained off-ball movement by a player whose team is in possession, made with intensity, in order to receive a pass or create space.

But Liverpool's left-back also completes his dominance across a raft of metrics with a chart-topping 370 sprints to date, some 40 more than Rashford - the next most prolific high-intensity runner among the two clubs.

Who wins the press?

United have upped the ante in this area and now surpass Liverpool for pressing all over the pitch - but Klopp's side reign supreme for high turnovers.

So Liverpool typically press and counter-press higher up the pitch to avoid leaving their high line vulnerable to the counter attack, which will clearly be a key battleground on Sunday. 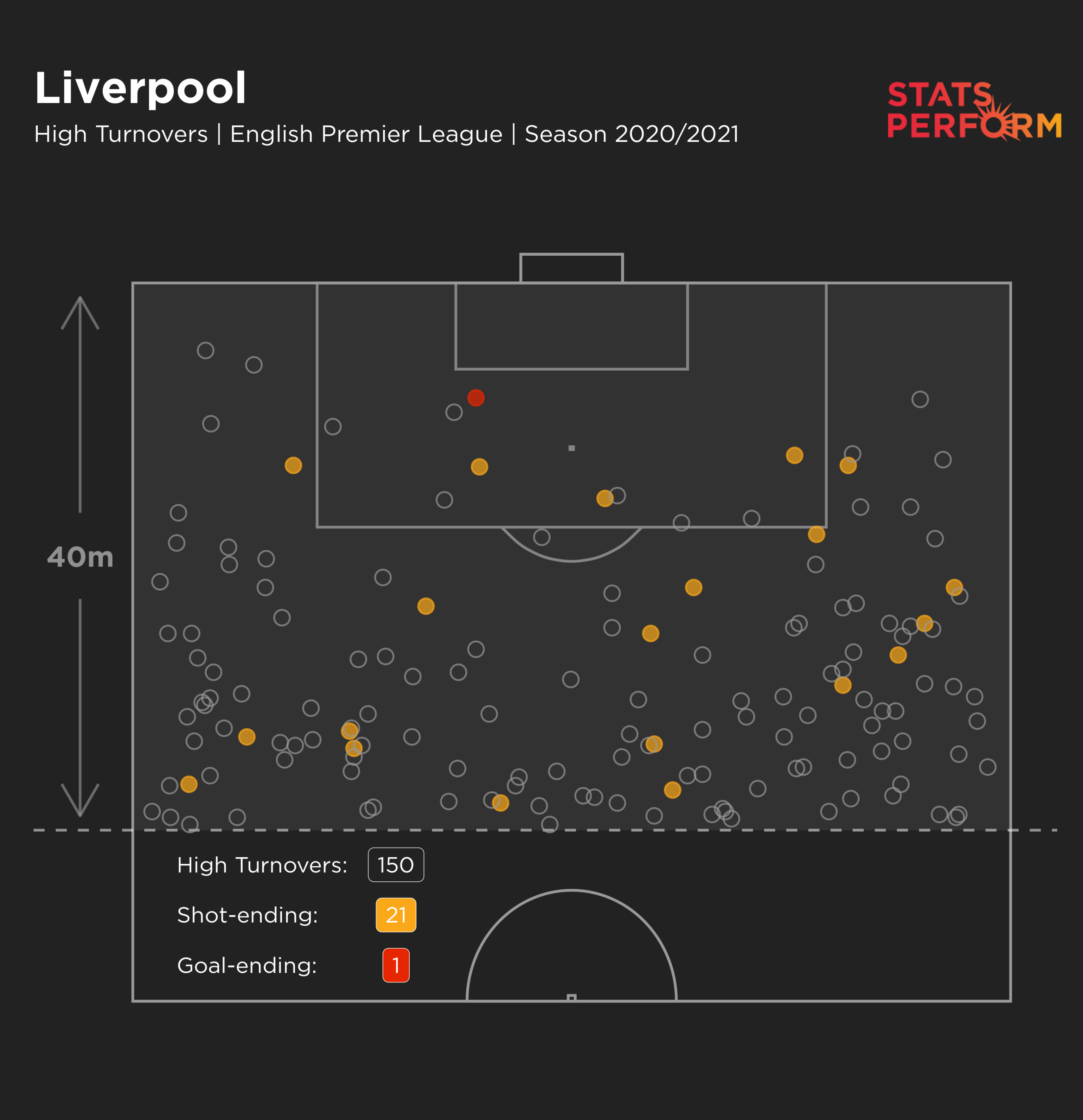 Liverpool's current makeshift centre-backs Jordan Henderson and Fabinho top the club for ball recoveries - defined as collecting loose balls, often forced from pressing - so Klopp will be looking to reinforce his midfield if that pairing is deployed at the back for a second game running.

Pressing: A co-ordinated action by two or more defending players, applying pressure at the same time to one or more pressed players.
High Turnovers: Sequences that start in open play and begin 40m or less from the opponent's goal.

Meanwhile, Solskjaer could call upon Fred for greater resistance against Liverpool's high press, with the Brazilian trailing only Fernandes for pressures and leading the way for recoveries in United's midfield this term.

One of the reasons Liverpool apply so much pressure in attacking areas is because of their high line. In possession, a high defensive line compresses the pitch and allows faster passages of play - if a team can play through the opposition press.

Out of possession, the opposition has less space to play out and will often lose the ball under the press or counter-press. Even when the opposition threads a pass through, or over, the high line, a well-drilled line often catches the runner offside - or pacy defenders are tasked with winning a last-man race.

A team that can pass under pressure, win high turnovers and frequently bursts from the blocks is well-suited to playing a high line. So, it may come as no surprise Liverpool and Manchester City excel here - but United have the next highest line among 'big six' rivals.

Klopp's side are also masters at deploying the high line with defensive efficiency, having topped the division for catching opponents offside last season and leading the way again this term, by some margin.

And Liverpool's high line is not restrained to outfield players: Alisson has attempted more 'keeper sweepings' than any other stopper this season, charging out as his defenders rush back to help snuff out any danger that breaks through.

So England's two most successful clubs and current leaders go head-to-head this Sunday with a myriad of battlegrounds to win or lose, to determine the latest chapter of their great rivalry.