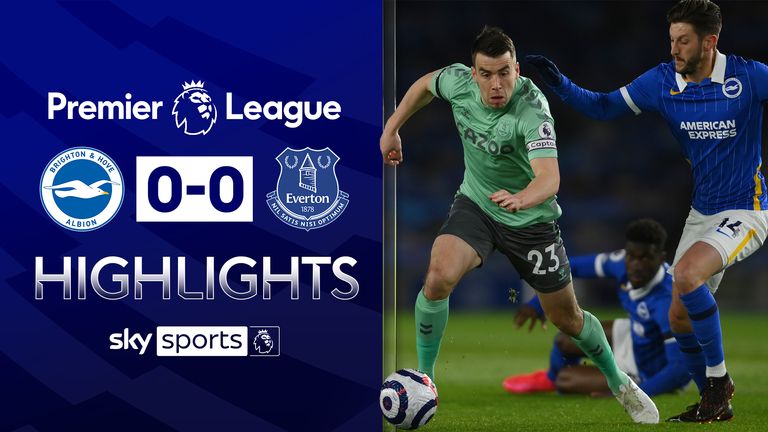 FREE TO WATCH: Highlights from the goalless draw between Brighton and Everton in the Premier League.

Brighton's struggles at home continued with a 0-0 draw against injury-hit Everton, who lost further ground in the race for Europe on Monday Night Football.

In a game that lacked real quality, Neal Maupay, Jakub Moder and Adam Lallana all squandered chances as Graham Potter's side were held to a frustrating eighth Premier League draw of the season at the Amex Stadium.

Everton's hopes of halting a run of three league games without a win were hampered by injury to top scorer Dominic Calvert-Lewin before the game, although the Toffees could have snatched all three points when substitute Alex Iwobi flashed a shot over in the final minute.

The draw hands Brighton, who climb a place to 15th, and Everton, who stay eighth, a point apiece towards their respective survival and European bids, but both will have been left wanting a more decisive boost to those campaigns.

Man of the Match: Yves Bissouma.

Everton striker Calvert-Lewin was the surprise omission from the teamsheet as another name was added to the Toffees' lengthy injury list.

Missing their top-scorer, Everton failed to register a single attempt on target in the first half, but Brighton could only go one better despite dominating for large parts.

Seagulls midfielder Moder dragged a shot inside the opening 10 minutes before Everton came to life and fashioned their first chance, which midfielder Tom Davies headed wide of the Brighton goal.

Brighton went close twice before the break as Maupay's drive deflected inches wide off Yerry Mina, before Yves Bissouma's audacious, acrobatic overhead kick nestled on the roof of the net as a potential goal of the season contender escaped the Seagulls.

With Everton options from the bench few and far between, Brighton retained control of the game but, as has been the case time and again this season, quality in the final third eluded them.

Moder wrapped a shot over the bar from a training ground corner routine, before Lewis Dunk's glancing header drew a fingertip save from Everton goalkeeper Robin Olsen.

With the game petering out for a draw, Everton sprung a late rally to snatch all three points, but Iwobi's drive fizzed over the bar to leave both sides with a point.

Analysis: Will Everton rue this run of form?

"The run of form Everton are on at the moment; you just get the feeling they will look back at this at the end of the season as a reason why they never really pushed for the Champions League and top four.

"Because there are so many teams involved and dropping points, no matter how bad your run is at the moment, you're always there or thereabouts in terms of points for Europe.

"Everton still have hope of Europe, because that was the target at the start of the season that Ancelotti keeps mentioning." 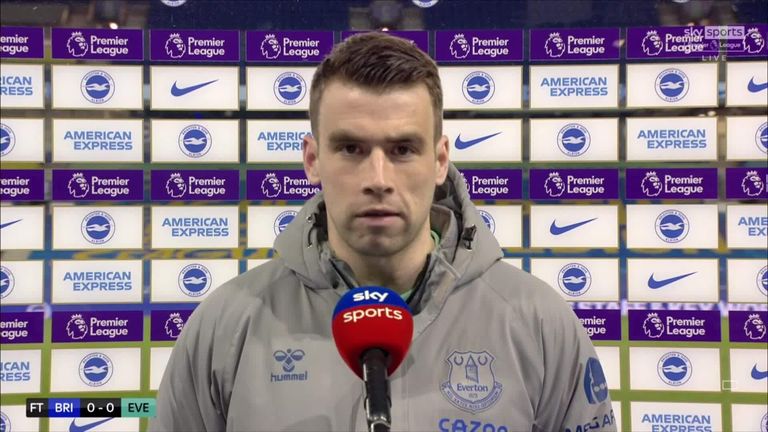 Seamus Coleman says that Everton would be disappointed if Everton missed out on the European places, following their draw against Brighton this evening.

Captain Seamus Coleman admits if Everton miss out on European football it will be their home form they will come to rue and not draws at places like Brighton.

"It would be a massive disappointment [if we didn't qualify for Europe]. We have been given opportunities this season by other results. We just had to look after ourselves and we would have been in a better position.

"That would be the disappointment. We have full belief and obviously the manager we have has massive experience and doesn't panic. We have something to play for but yes there's no question we need to finish in European places.

"The morale is good. We have a good bunch of lads and we train hard. It's up to myself and a few of the experienced lads to keep that morale high at all times. We have a great manager and some top players. It's just about those results at home we need to brush up on massively." 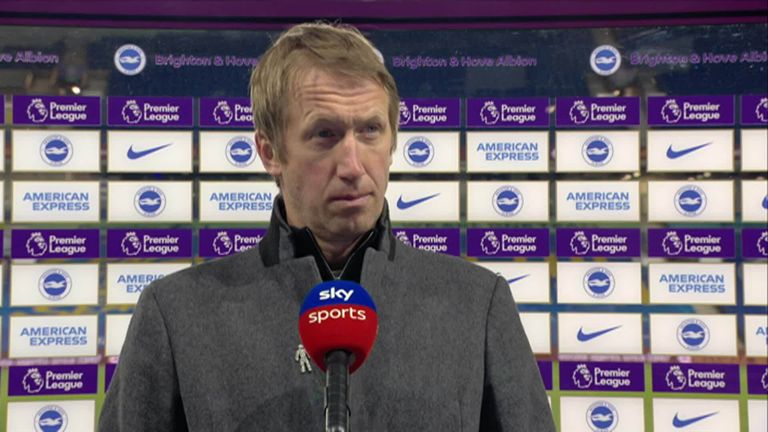 Graham Potter reacted to Brighton’s goalless draw with Everton and he felt they were the better team but lacked quality in front of goal.

Brighton manager Graham Potter: "I thought it was a good performance from us. I thought we had good intent. We tried to attack and played positively. We lacked a little bit of quality in the final third but defended well when we had to. It was a hard-earned point.

"I don't think there were loads of clear-cut chances. There were some opportunities. I don't think we worked the keeper enough. They were defensively set up to do well. It wasn't easy to find the space but we were the closest ones to scoring.

"You always want a bit more but there's another team on the pitch and an opponent fighting for the win. The effort and intent were there we just missed that little bit to get the goal." 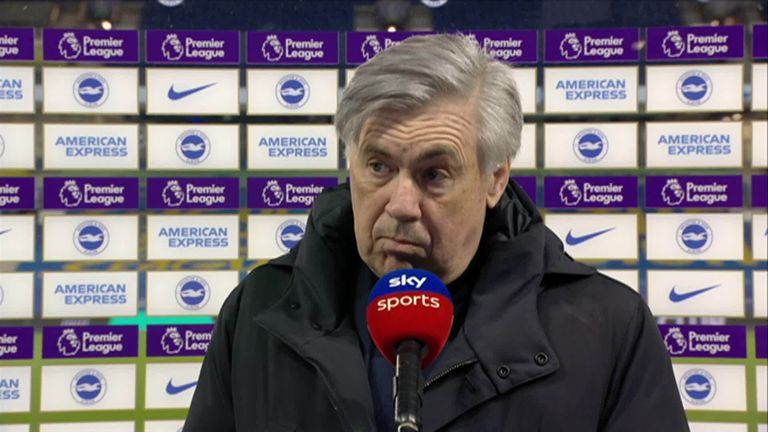 Carlo Ancelotti feels Everton’s recent injury problems have affected their recent form and their battle for a top four finish. Ancelotti was reacting after Everton’s 0-0 draw with Brighton at the Amex.

Everton manager Carlo Ancelotti: "The fight [Europe] is more difficult now but a point is a point. We had good spirit; we could have been better with the ball as we were unable to efficiently reach our strikers. But we are still in the fight, it's a difficult moment but we are still there. We have a lot of players out, but I hope they recover so we can fight [against Tottenham] on Friday.

"The last four games were not good. I hope Allan recovers soon and, in a few weeks, hopefully Abdoulaye Doucoure. We have to play against Tottenham, Arsenal, West Ham and two games against Aston Villa. All the games are really important if you want to reach Europe."

Man of the Match - Yves Bissouma 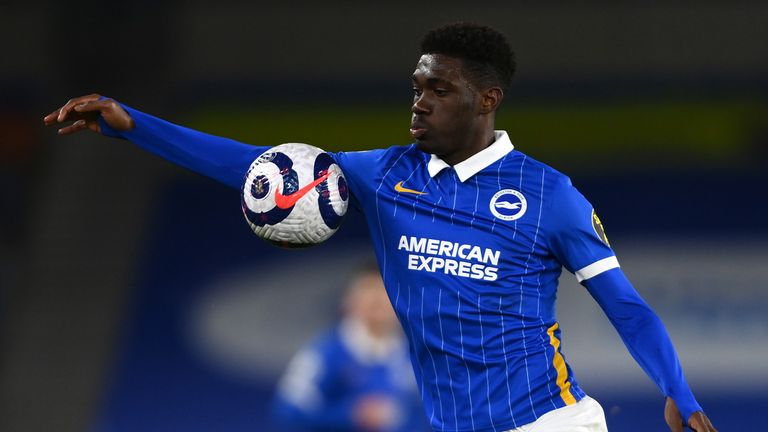 "The biggest talking point, the biggest bright spark, was Yves Bissouma," said Jamie Carragher. "He was man of the match but he was not just the best player on the pitch, he was the best player by a mile on the pitch. He really was. You looked at him and thought, he really does look like a top-quality player.

🍾Yves Bissouma - Man of the Match 🍾

Most tackles won in @premierleague this season