Burnley have fourth match this season postponed due to Covid, but it is the first time the request has come from the Turf Moor club; Thomas Tuchel questions whether rules around postponements are being applied equally, warning he would be "very angry" if it was not the case 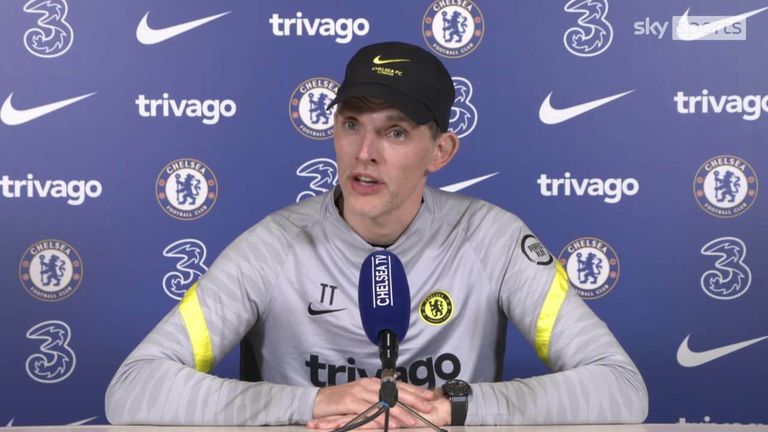 Thomas Tuchel says he will be 'very angry' if Covid rules are being abused by other clubs after Chelsea were told they had to play a match when they felt they were stretched during the Christmas fixtures.

Thomas Tuchel says he would be "very angry" if it was found that Premier League clubs were abusing rules to get matches called off as Leicester's trip to Burnley became the latest fixture to be postponed.

The fixture at Turf Moor - which was due to take place on Saturday - was called off on Friday due to Covid cases and injuries within Sean Dyche's Clarets squad.

It is the fourth Burnley match this season to be postponed due to Covid-19 but the first time the request has come from the Turf Moor club. The relegation-threatened Clarets also had another fixture, against Tottenham, postponed at short notice due to heavy snow.

But Chelsea boss Tuchel - who hit out at the Premier League in December after it refused to grant Chelsea's request to have their game at Wolves postponed following a number of Covid cases - questioned whether the rules were being applied consistently.

"I strongly, strongly hope that's not the case, otherwise I would be very angry," said Tuchel when asked if he felt Covid rules were being abused.

"We are doing everything to make games happen and we were made to play when we thought maybe we should not. So I can only strongly hope the rules are the same for everybody."

Chelsea have reported one positive Covid-19 test ahead of their trip to Manchester City for Saturday's 12.30pm kick-off in the Premier League, with Andreas Christensen now isolating.

The Denmark defender had only recently returned from a spell out injured. Thiago Silva and N'Golo Kante are, however, both in contention to be involved, albeit with very little training time under their belts.

"We have one positive Covid test, with Andreas Christensen," Tuchel said. "So he will be out for this game.

"To have the news that Andreas Christensen is again out after we waited so long for him, and now he plays so, so strong, and again he's out. It's a bit of a setback for everybody, for us mentally.

"You finally have players back, and it's just like catching fish."

The Premier League confirmed it had upheld Burnley's request to postpone their game on Friday, with a statement reading: "The Premier League board accepted Burnley's application as the club does not have the required number of players available for the match (13 outfield players and one goalkeeper), due to Covid-19 cases and injuries."

The re-arranged match against Watford is scheduled to take place on Tuesday, although that must now be in doubt.

Burnley were without seven players due to Covid-19 during last weekend's 2-1 FA Cup loss to Championship side Huddersfield, a match that was also missed by Dyche, and have since seen Chris Wood join Newcastle.

Earlier this week, Leicester's game at Everton was postponed for a second time with the Premier League stating they accepted the Foxes' application "as the club do not have the required number of players available for the match (13 outfield players and one goalkeeper) due to Covid-19 cases, injuries and players on international duty at the Africa Cup of Nations."

Arsenal boss Mikel Arteta has repeated his called for clarity on the decision making behind coronavirus postponements and urged the authorities to protect the integrity of the Premier League.

"The authorities have to take care of that, they make the rules. We don't get enough information, about the reasons behind that," Arteta said.

"Over a month ago I asked for more clarity, there was always a possibility when things opened how people were going to use.

"[I would like more clarity] on the reasons why we are postponing matches, why some, and why not others, to main the integrity of the competition.

"This is happening in many different leagues, we have to focus on what we can do in this to try to maintain the level of admiration for the Premier League, we have to protect that."

The Arsenal manager has also indicated the Gunners may ask for Sunday's north London derby to be postponed.

"We are having communications every single game about what the situation is around the match for both sides. I always mention that we are willing to play. Once we have a fair assessment of the squad and where we are, the Premier League will make the decision. But from our side, we always want to try to play."

Hasenhuttl: PL 'opened the door' to Covid rules being twisted

In his press conference on Friday, Southampton manager Ralph Hasenhuttl was strong on the lack of transparency for postponements and how the Premier League is dealing with it.

He said: "They've opened the door, and you cannot be surprised that someone is walking through now. I cannot say anything about the Covid situation there because this is normally the reason why you cancel games.

"You have no view, no transparency, and you cannot say anything about that. The rest is speculation.

"The Premier League has to handle this. This is why I say that players/new signings shouldn't be allowed to play in cancelled games when they haven't been there before this game was due to play. This is a problem they have and it's hard to solve it at the moment."

1) The impact of COVID-19 infections on a club's squad, as well as injuries, illness and those isolating, and the number of players available on the squad list and any Under-21 players with appropriate experience. Where a club cannot field 13 outfield players and a goalkeeper either from its squad list or its appropriately experienced Under-21 players, the match will be postponed.
2) The status of any COVID-19 outbreak within a club, including the number of individuals affected, the sequence and source of infections and their proximity to the match in question.
3) A club's ability to safely prepare its players in the lead-up to a match.
4) Medical advice as to whether there is any unacceptable risk to the health and safety of players and staff by playing the match.
5) Any advice from UK Health Security Agency and other public bodies.
6) Any other exceptional circumstances.