Man Utd have also renewed their interest in Fiorentina defender Nikola Milenkovic, according to Sky in Italy.

Manchester United are interested in Lazio midfielder Sergej Milinkovic-Savic, according to Sky in Italy.

Lazio's president Claudio Lotito wants £90m for the 24-year-old and does not intend to lower the asking price.

It is understood Milinkovic-Savic, who signed a new deal with Lazio last October, would like to go but will not force a move and would be prepared to stay at Lazio for another year.

United have had a long-standing interest in Milinkovic-Savic, with Jose Mourinho personally scouting him during Serbia's 2-0 win over Montenegro in October 2018.

Milinkovic-Savic has scored 31 goals in 138 appearances for Lazio since joining from Belgian side Genk in July 2014.

United are in the market for at least one central midfielder this summer and have shown interest in Sporting Lisbon's Bruno Fernandes, Newcastle's Sean Longstaff and Southampton's Mario Lemina.

United and Newcastle held high-level talks about Longstaff last weekend but no official bid has yet been made, according to Sky sources.

Paul Pogba has made it clear he wants to leave United this summer, though Ole Gunnar Solskjaer says the club will not be forced into selling against their will.

The France World Cup winner said last month he wants a "new challenge" after three years at OId Trafford, while his agent Mino Raiola told The Times last week he was "in the process" of arranging his client a transfer.

United have also renewed their interest in Fiorentina defender Nikola Milenkovic, according to Sky in Italy.

Mourinho was interested in potentially adding the 21-year-old to his United squad last January, before being sacked by United in December.

Any move for the highly-rated Milenkovic is likely to be costly. 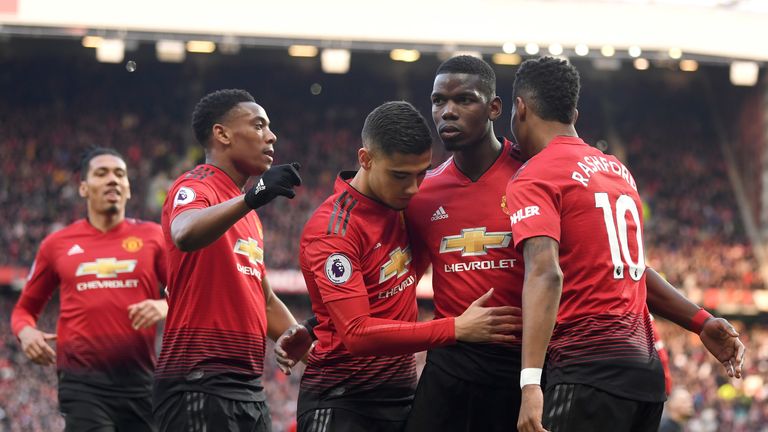 Fiorentina chairman Mario Cognigni stated in September the club turned down a £36m offer for the player last summer.

Milenkovic, a 6ft 5in centre-back who can also play at right-back, was originally signed by Fiorentina from Partizan Belgrade in 2017 for a fee of around £4.5m, and has a contract running until June 2022.

Solskjaer is keen to add a centre-back to his squad before the beginning of the season and United have also offered £70m to Leicester for England international Harry Maguire.

United's attempt to sign Maguire is "very much alive", a source close to the negotiations told Sky Sports News this week.