Jesse Lingard, Anthony Martial and Luke Shaw missed United's goalless draw against Wolves on Saturday through illness, while Solskjaer admitted defender Harry Maguire was "hobbling about" during the match.

Speaking after the game, the United manager hoped "a night or two in their own beds and hopefully some Bovril or paracetamol" would cure any issues - with the injured Paul Pogba and Scott McTominay already long-term absentees.

But Solskjaer admits "some of them are still not ready" and he will now wait until Tuesday morning before deciding his team selection ahead of the first-leg match at Old Trafford, live on Sky Sports Football.

"We're going to give them as much time as we can, that's the most honest answer I can give you," Solskjaer said in his pre-match press conference.

"If there was a game today I'm not sure they could play at their best. 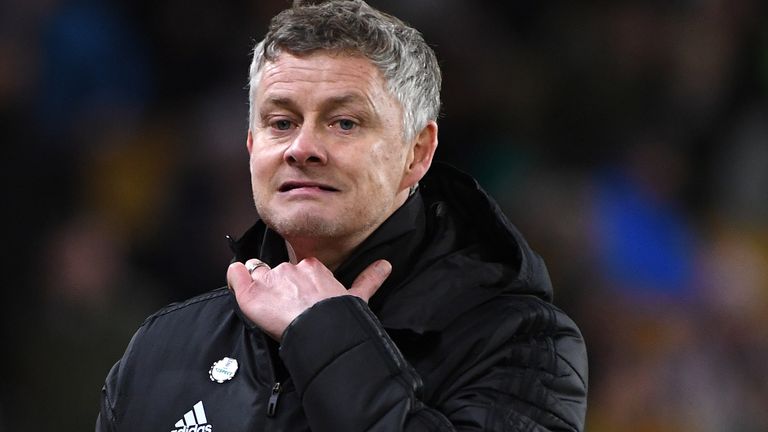 We're going to give them as much time as we can, that's the most honest answer I can give you.

'Big games give you energy'

United failed to register a shot on target at Molineux and a replay will now take up the club's only free midweek this month, but Solskjaer dismissed fears of fatigue.

Ahead of the Manchester derby, the United boss insists "big games give you energy".

"It gives you the urge to go to the next level, above and beyond what you are capable of in your head," he said. "You surprise yourself.

"Big games, you get the rhythm, you don't train in between, there's no way. It's about mental preparation. Hopefully we remember what we did last time and what we must do better."

'Pep has set standard for Utd to target'

Manchester City boss Pep Guardiola expects a repeat gameplan from United after Solskjaer's side produced an exhilarating display of counter-attacking football to win 2-1 in last month's derby at the Etihad Stadium.

"We've got to aim for performances like that," said Solskjaer. "We know we can do it physically.

"But every game lives its own life. When you get highs like that, I'm sure they will look back and say that's the Man United we want to see but we still want to improve on that.

"I've admired Pep's teams. They've raised the bar so much since Pep came, the standards he's set is something for us to aim for."