Fred sent off in the second half after only being booked for first-half headbutt. Marcus Rashford struck for Man Utd, but a Neymar double and Marquinhos finish put Paris Saint-Germain in control of Group H. Ole Gunnar Solskjaer believes Paris Saint-Germain were "there for the taking" but were let off by Man Utd's wayward finishing at Old Trafford.

The French champions emerged 3-1 winners and will win the group with victory over Istanbul Basaksehir in their final game, while United - who had Fred sent off in the second half - need to avoid defeat at RB Leipzig to progress to the knockout phase.

However, Solskjaer says it would have been different if United had finished their chances, after seeing Anthony Martial pass up several good openings and Edinson Cavani hit the bar with an audacious chip.

"It was a very good game of football which deserved fans," Solskjaer told BT Sport. "When you see the team sheets you think there might be goals in this game, because there's loads of attacking talent and I don't think anyone was disappointed. Chances for both teams.

"With a bit more clinical finishing we could have finished the game midway in the second half. In that period they were there for the taking.

"We had some big chances then, some big moments. That's the difference when you get to the big games: the clinical moments. You can say about the possession in the middle and which team dominates but games are always decided at either end."

Fred was shown a harsh second yellow card and sent off on 70 minutes but the Brazilian had been fortunate not to see red for pushing his head towards Leandro Paredes in the first half.

Solskjaer conceded his player was "lucky" not to be sent off for the first incident but then hard done by later in the game.

"Fred shouldn't put his head towards him," said Solskjaer. "I don't think he touched him but still you don't do that. So he was a bit lucky, it's either nothing or a red card. I thought maybe he was a little bit lucky to stay on when the referee decided to give him anything. 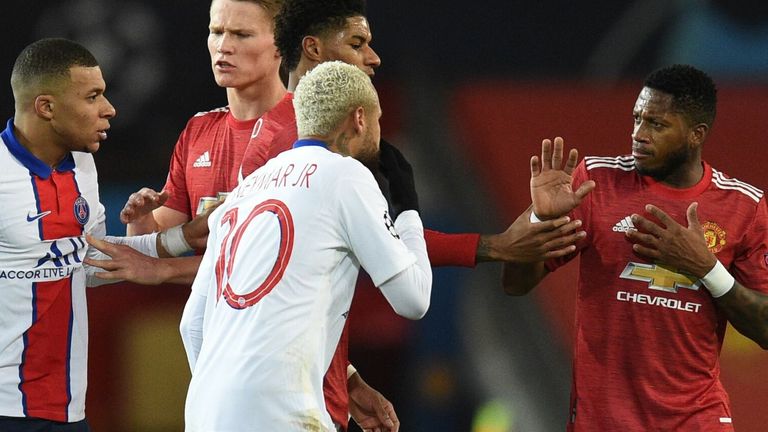 "Fred has played really well. We spoke about staying calm, staying on your feet, and the second yellow card is nowhere near a foul. Ander (Herrera, who he fouled) knows that as well, he definitely knows."

However, Solskjaer rejected a suggestion in his post-match press conference that he should have substituted Fred at half-time, with the player on one yellow card at that stage.

"I thought Fred kept his head cool exceptionally well second half. He was unlucky with that decision by the referee. You can say in hindsight, to have 11 men, of course that would have been better, but who's to say?"

Solskjaer also revealed he is hopeful Marcus Rashford - who scored United's only goal of the game before limping off with 20 minutes to play - will be available to face West Ham, live on Sky Sports, on Saturday. "Let's see how quickly he can recover," said Solskjaer. "Hopefully he'll be ready for next weekend for the West Ham game. But we don't know."