Cristiano Ronaldo was substituted after 71 minutes during Manchester United's 3-1 Premier League win at Brentford; the Portuguese cut a dejected figure in the dugout after failing to finish the game but Ralf Rangnick says he acted on behalf of the team Manchester United interim boss Ralf Rangnick has defended his decision to substitute Cristiano Ronaldo after the Portuguese showed his disappointment at being hauled off during his side's 3-1 win at Brentford.

But it was another less than convincing display from the visitors, while Ronaldo was far from impressed at being substituted with 19 minutes left.

It required a much-improved second-half showing from United in order to secure their first league win of 2022, but Rangnick was forced to answer questions about Ronaldo's reaction to being replaced by Rashford with the visitors leading 2-0 at the Brentford Community Stadium.

"That is normal - a striker wants to score," Rangnick told BT Sport. "But he has come back from a little injury and it was important to remember we have got another game coming up. 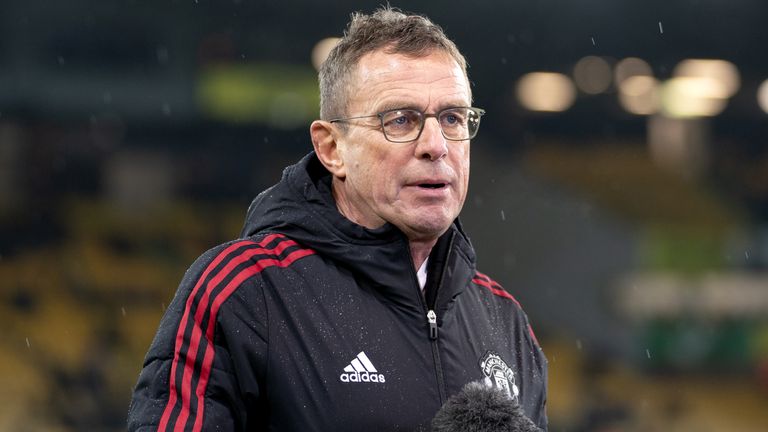 Cristiano Ronaldo was visibly frustrated at being subbed off in Manchester Utd's game against Brentford, but Rangnick insists the change was made in the interest of the team

"Also after what happened at Villa Park, we had to defend the lead this time and it was important that we went back to a back five and while we didn't keep the clean sheet, it was important to make sure nothing else happened."

Later in the post-match press conference, Rangnick added: "The only reaction I got was, 'why me? Why did you take me off?' I had to take the decision in the interest of the team and the club. We did the same thing when 2-0 up at Villa and didn't want to make the same mistake again.

"I understand Cristiano is ambitious but maybe when he is a manager in the future, he will make the same decision after 75 minutes.

"I didn't expect him to hug me after being substituted. I know how goalscoring players think and I had to make this decision. I have no issues with Cristiano. He was coming back from injury and hadn't played for one-and-a-half weeks. We had the likes of Rashford and Anthony Martial on the bench so why not use it? I would make the same decision again.

I didn't expect him to hug me after being substituted. I know how goalscoring players think and I had to make this decision. I have no issues with Cristiano.

"I've been here now for six weeks and I've never had an issue with Cristiano. We had a discussion before the Villa cup game about his injury and we agreed not to use him.

"He was available again today and we decided to play him from the start. The most important thing is that we win games and this comes first."

Anthony Elanga followed up on his showing at Aston Villa to help United rediscover their mojo. Bruno Fernandes' influence grew in the game, and he really ought to have capped a fine individual performance with a goal to go with his two assists in stoppage time.

Yet he left the pitch still ruing his late miss, a sign of his standards. This is the sort of attitude United need if they are to secure a Champions League spot - which must be the bare minimum.

Such a winners' mentality was seen in Ronaldo's reaction to being substituted, but he must acknowledge the need to contain his disappointment in order for the collective to thrive at Old Trafford.

After all, a victory by such a handsome margin didn't look likely during the first half. FREE TO WATCH: Highlights from Manchester United's win against Brentford

"It was not a strong conversation, but obviously we had to change a few things," Rangnick said when reflecting on a poor display in the opening 45 minutes.

"The first half was not good in all aspects of the game. In the second half, we were more urgent, attacking higher up the pitch and taking the right decisions in the counter attack and we scored, which is the big difference.

"Elanga was outstanding in the second half, put in a lot of work against the ball and then scoring the first goal. But I am happy for all our young players tonight."

Could this be Elanga's breakout season? The Sweden under-21 star has started back-to-back Premier League games and has notched seven appearances this term, including a start on the European stage against Young Boys last month.

The 19-year-old provides an abundance of pace, energy and endeavour, clocking a team-topping 19 sprints on Wednesday evening and only Scott McTominay attempted more dribbles in the opposition half.

Starting as the wide-left forward in a 4-2-3-1 system, Elanga combined most frequently with Alex Telles, McTominay, Raphael Varane and Ronaldo - contributing to the majority of United's attacks coming down his flank.

It was a bitter blow for Brentford, who had bossed the first league meeting between these sides since 1946 but only had Ivan Toney's late consolation to show for it.

Mathias Jensen was denied by David de Gea on three separate occasions before Elanga's opener, and Brentford boss Thomas Frank described it as a "miracle" that his side were not ahead at the interval.

"It was one of those nights, fair play to David de Gea," Frank added. "We get those chances again one will go in the back of the net. Our intensity killed them, we showed that in the first half. We played the Brentford way. It was a miracle they weren't two goals down by half-time. "He was by far the best Manchester United player today. Their first goal changed the momentum of the game. Of the three goals, the second is most disappointing and difficult to come back from. The way we smashed them in the first half was fantastic. I'm so proud of my team.

"I'm unbelievably proud of my team. We are the smallest club in the Premier League, Manchester United the biggest. We destroyed them in the first half, they didn't have a sniff, three huge chances and there could only have been one winner of this game.

"They are unbelievably lucky. I know all the stuff about taking chances. They changed the system against little Brentford."