Games against Manchester United and Tottenham are exactly what Liverpool need to turn their season around, says Steven Gerrard

Steven Gerrard believes Liverpool's looming clashes with Manchester United and Tottenham are exactly what Jurgen Klopp's side need to get their season back on track.

The Reds are seventh in the Premier League table, seven points behind both Manchester sides, after just one win from their last seven games.

But Liverpool have had a superb record against their title rivals since Klopp took over, going undefeated against the top six last season (five wins, five draws).

And Gerrard is confident Liverpool can raise their game against United and Spurs, in games which are both exclusively live on Sky Sports.

"I cannot wait for those two games because watching Liverpool since Jurgen has come in - they are the games where Liverpool seem to prove everyone wrong and put in top-class performances," Gerrard told Sky Sports News as he collected a Legends of Football award at an event for music therapy charity Nordoff Robbins at London's Grosvenor House Hotel on Monday evening.

"I think their record against the top sides is the best so if I was a Liverpool player or the Liverpool manager, those games can't come quick enough. 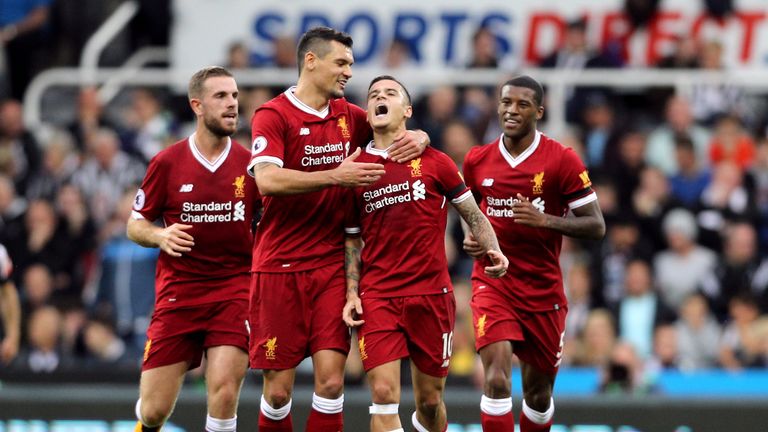 "The frustrating thing for Liverpool at the moment is the international break after a couple of games where they feel they should have done better.

"I think Liverpool will itching once the international break is over and really relishing those games.

"As a fan, I am looking forward to watching them in those games because I think they can bounce back.

"With one good result or a couple of good results, they will find themselves back in the top four."

Former Liverpool and England midfielder Gerrard was full of praise for Harry Kane but wishes he was a Red!

Gerrard admits Liverpool's recent results, which included a 1-1 draw with Newcastle on Sunday, have been frustrating to watch but he remains convinced Klopp is the right man to lead Liverpool to their first silverware since winning the League Cup in 2012.

"The league doesn't lie - Liverpool are where they are," Gerrard said. "But what I would say is I am really enjoying watching the team at the moment.

"I love the manager. I think he has taken this team and the club forward. There is a lot of excitement about.

"But we are seven games in and Liverpool are capable of going on a long run of winning games.

"I am very, very confident that this season can be a success, whether that be in the league or in Europe or the FA Cup.

"I am a big, big believer in this manager."

Pick your team for free, create a league to invite your mates and let the managerial mind games begin!