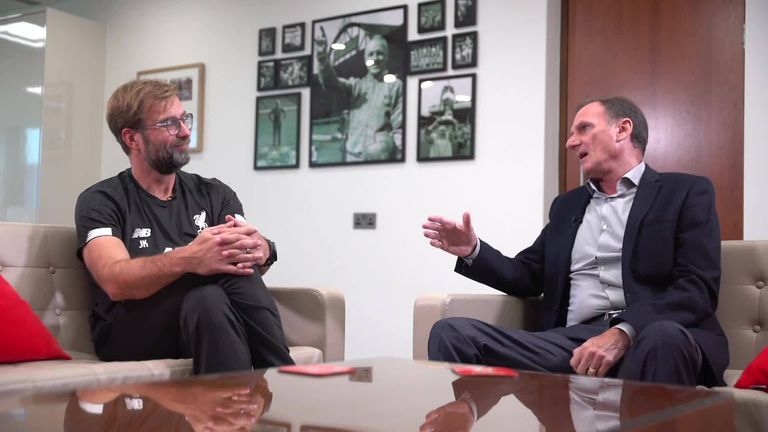 Liverpool go into their Premier League clash with Tottenham on Sunday with a commanding lead at the top of the Premier League - but boss Jurgen Klopp says his side are about to enter "the hardest period ever" in their pursuit of the title.

The Champions League holders have made a flying start to the 2019/20 campaign, only dropping points in the Premier League for the first time last time out, in their 1-1 draw at Manchester United.

Next up comes the tough test of Mauricio Pochettino's Tottenham - who are desperate to pull off a big result and shake off the stuttering start they've made to their own season.

But with a hectic November and December coming up - including a crunch contest with Manchester City, live on Sky Sports - Klopp has called for focus from his players in this decisive moment.

"We are in a better position than we would have expected at the start of the season," Klopp said, when asked by Sky Sports' Phil Thompson whether he is dreaming of landing Liverpool a first Premier League title.

"Are we already through? No. We have created a proper basis to work with. The hardest period ever will come up again. November, December, crazy.

"We have to be lucky in some moments. We have to fight for it, and that's what we do. No guarantees."

However, Klopp feels his side have evolved and improved again from last season, where they ran City so close to the crown. The German says Liverpool's Champions League triumph - while now in the past - has shifted the mindset of his players.

"It was incredible," Klopp said of the win in Madrid over Spurs. "But it's a nice memory, wonderful, great, everything perfect, but it's gone, it's history.

"It's a nice part of life, but nothing else changed. It was probably the best summer of my life.

"The boys started the season in a different mindset, more convinced about themselves. I feel there is still a lot of space in that department, where they can be more convinced."

If Liverpool can get back to winning ways in the Premier League on Sunday that confidence will be boosted again.

They meet a Tottenham team that has won just one of their last four in the Premier League - but Klopp has warned Spurs' 5-0 midweek win over Red Star Belgrade in the Champions League shows they should not be underestimated.

"I don't understand 100 per cent what happened, but what I saw during the week is how Spurs can be," said Klopp.

"That's the team we prepare for, not the team who struggled three or four weeks ago.

"We need to be intense, because a little bit against Tottenham will not be enough. They want to strike back!"

During his chat with Thommo, Klopp revealed he is a fan of Sky Sports News' Ref Watch with Dermot Gallagher, which you can watch every Monday morning at 11.30am on Sky Sports News and Sky Sports Main Event, and read about on the Sky Sports apps.

VAR has been a hot topic on the programme this season - and Klopp says while he approves of the interventions correcting wrong decisions there is still room for uncertainty, such as the challenge on Divock Origi in the build-up to Manchester United's opener against Liverpool last weekend.

"I like the clarity," said Klopp. "After our game, and you can say what you want about the challenge, and most people feel it was a foul on Origi. On Sky, the Ref Watch said [so]... I don't watch it, but I read it. In the moment it is so interesting, because we still discuss it."