Liverpool manager Jurgen Klopp has eased fears over the extent of Sadio Mane's injury after the forward was forced off during the first half of the 2-1 win at Wolves.

The Reds extended their Premier League advantage to 16 points with a hard-fought victory at Molineux on Thursday thanks to goals from Jordan Henderson and Roberto Firmino.

Victory allowed Klopp's relentless side to stretch their unbeaten league run to 40 and they still have a game in hand in next week's trip to West Ham.

There were concerns, however, in the opening period as Mane went down after 33 minutes, with the Senegalese holding his hamstring. Takumi Minamino came on in his place, but Klopp has moved to reassure supporters.

"Sadio is a real shame he had to go off," he said. "Hopefully it's not too bad - just a muscle tweak, but we will see tomorrow."

Liverpool have amassed 67 points from a possible 69 in the Premier League this season - at least five more than any side in English top-flight history has ever previously had after as many games of a campaign.

Klopp dismissed any pressure with the club closing in on a first title in 30 years, insisting he is not fixated on their position.

The German added: "I don't think about it, I had to ask about exactly the amount of points, that's the truth, I really forgot in the week.

"That's three games in seven days which is a lot. We lost Sadio Mane (to a hamstring injury) and that's the pressure I think about. All the rest is no pressure.

"The message that 'you can lose six games' [and still win the title], I could vomit when I hear that to be honest.

"So just let's carry on. We have to find solutions for all the different games. Let's work on that, and that's probably without Sadio."

Liverpool travel to West Ham next week for their game in hand and victory would move them 19 points clear of Manchester City. 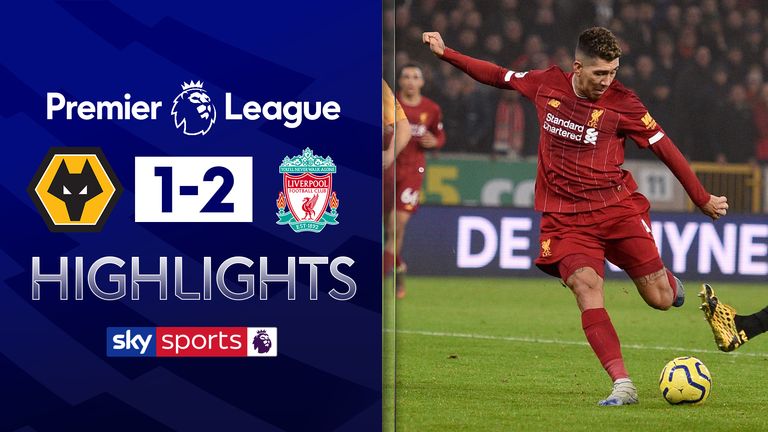 Wolves, who remain seventh, dominated much of the play after the break but became another victim of the Liverpool juggernaut.

The hosts knocked the runaway Premier League leaders out of the FA Cup at Molineux last season and looked for a repeat result, adding to the 18 points they have already gained from losing positions this term.

Adama Traore set up Raul Jimenez for Wolves' leveller six minutes after the restart and the winger caused countless problems for the visitors, with his drive turned away from Alisson proving to be a pivotal moment.

Asked if that was the toughest game Liverpool had been given in the Premier League this season, Klopp added: "No. But it was a big one and was the toughest you could get for today for different reasons.

'We don't go for perfection, just a reaction'

"They scored a super goal and had a big chance from Ali saves. We scored our wonderful goal after a set-piece but not a second or third means everything is open and then it gets intense.

"We had chances, Mo (Salah) and Bobby in front of the goalkeeper and then a worldie from Bobby, it was a super goal.

"The goal they scored, we were 1-0 up and it's a counter-attack. That doesn't make much sense. We don't go for perfection. We go for the perfect reaction so we fight back in difficult situations in the game. That is what the boys did."

Wolves boss Nuno Espirito Santo was pleased with his side's display despite the result.

"It was a good performance and a very good game. We were organised, we created a lot of situations and we kept going.

"The result is a consequence of all these things. Defensively we were organised and we played well.

"We created chances and the momentum was there but we faced a very good team. I am very happy with the boys. It's small margins.

"It says a lot of what we're trying to do for the future. We're going the right way."

Wolves travel to Manchester United on February 1, live on Sky Sports Premier League from 5pm; kick-off at 5.30pm. Liverpool travel to Shrewsbury in the FA Cup fourth round on Sunday at 5pm.