There was more success for Liverpool as four of Klopp's players were named in the men's team of the year alongside Manchester City midfielder Kevin De Bruyne.

Manchester City and England defender Lucy Bronze was named the women's player of the year. Bronze won a third successive Champions League title with Lyon in August, before returning to City later in the summer.

Klopp won the prize for a second successive season after beating off competition from Leeds boss Marcelo Bielsa and Bayern Munich's Hansi Flick, who were the other finalists for the award.

Liverpool followed up their 2018-2019 Champions League triumph by winning the 2019-20 Premier League as the club ended a 30-year wait to win the top-flight title.

Klopp gave credit to his coaching team, saying: "I have to thank these boys. What we did in the last few years was really special."

On the Premier League title, the German added: "I had no idea how it would feel and it felt absolutely overwhelming."

Lewandowski overcame fellow finalists Cristiano Ronaldo and Lionel Messi to claim the award, becoming just the second player outside of the famed duo to win the award - or its previous incarnations - since 2008.

"To win such an award and share this title with Messi and Ronaldo, is unbelievable and means so much to me," Lewandowski said.

"I am very proud and happy. This is a great day for me, and also for my club and colleagues. 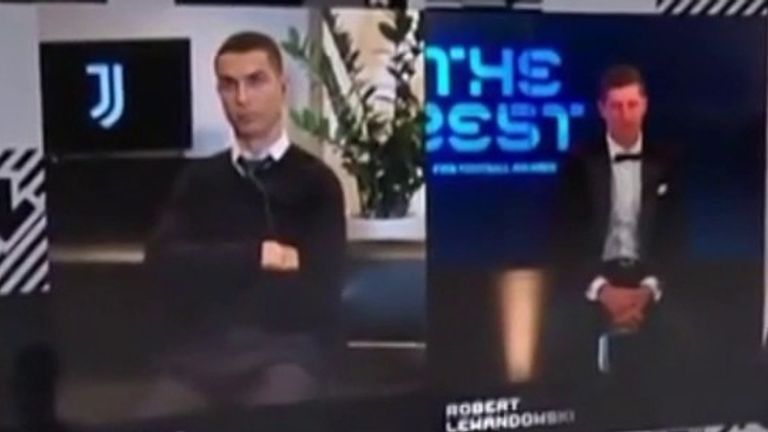 "This award also belongs to my colleagues, the coach and Bayern in general. It is an incredible feeling, a lot of emotions."

Lewandowski's agent Pini Zahavi hit out at world football's governing body, while congratulating his player on the award.

He told Sky in Germany: "FIFA and the world of football have finally recognised Robert as the best player in the world this year. If Robert had been born in another country, I am sure he would have received this trophy a long time ago already.

"I want to congratulate him, his family and all of his millions of supporters. He is not only the best scorer in the world, but an example of a great athlete and personality. Bayern Munich and myself - we are very proud to have him."

Sky Sports News have contacted FIFA for its right of reply.

Liverpool's Alisson, Trent Alexander-Arnold, Virgil van Dijk and Thiago Alcantara were named in the men's XI of the year, along with City midfielder De Bruyne.

Brazil international Alisson lost out to Bayern keeper Manuel Neuer in the award for the goalkeeper of the year, but was chosen ahead of the German in the team of the year.

Alexander-Arnold and Van Dijk were key figures in Liverpool's title-winning side, while Thiago joined the club this summer after helping Bayern to win the Champions League.

The finalists for the men's player of the year - Lewandowski, Ronaldo and Messi - made up the front three in the team of the year.

Son sublime individual goal for Tottenham against Burnley last December has been named the best in the world over the last year.

The South Korean picked up the ball on the edge of his own area during the 5-0 Premier League win before running through the entire Burnley team and slotting past Nick Pope. Heung-Min Son's superb goal in Tottenham's 5-0 victory against Burnley has won the Puskas award. The strike also won the Premier League Goal of the Season award for 2019/20

Son beat efforts from Luiz Suarez for Barcelona and Flamengo's Giorgian De Arrascaeta to win the Puskas Award at FIFA's The Best ceremony.

Son follows in the footsteps of Cristiano Ronaldo, Neymar, James Rodriguez, Zlatan Ibrahimovic and Mohamed Salah in claiming the award.

In 2010, Blackburn were hovering in the middle reaches of the Premier League table, with manager Sam Allardyce keen for his side to convert more of the chances being created by the likes of Morten Gamst Pedersen and David Dunn.

Goals were proving hard to come by for Rovers at the time, during the 2009/10 campaign their forwards Jason Roberts, Franco Di Santo, Nikola Kalinic, David Hoilett mustered just eight between them in the top-flight.

Attacking midfielder Dunn was their top scorer with nine goals out of Rovers' 41 in the Premier League that season.

In stepped the club's head of recruitment, Martyn Glover.

Glover had been made aware of a forward who had netted 21 times in 34 games for Polish side Lech Poznan that season; he had a plan which may have created a striking legend to rival the one created by Alan Shearer.