Liverpool defender Virgil van Dijk posted an update on social media earlier this week showing him stepping up his recovery with a session on an exercise bike; "It's very good but still a long way to go, that's this kind of injury," says Jurgen Klopp 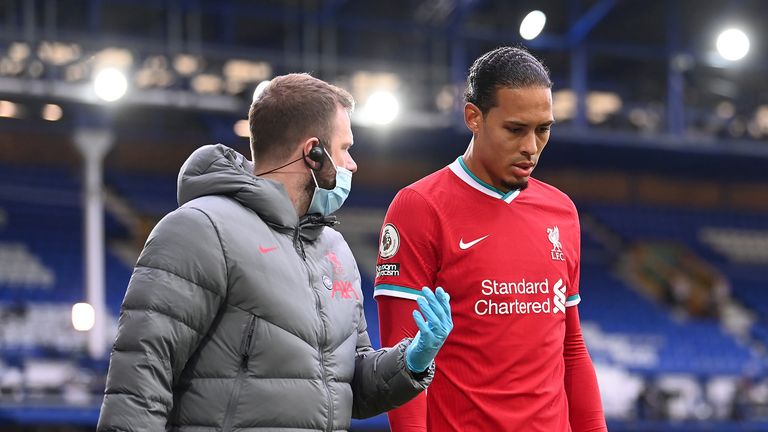 Jurgen Klopp says Virgil van Dijk is making progress in his recovery from a knee injury but admits the Liverpool defender still has a "long way to go" in his rehabilitation.

The Netherlands international underwent surgery after sustaining ligament damage in the Merseyside derby in October but posted an update on social media earlier this week showing him stepping up his recovery with a session on an exercise bike.

Klopp, who is also without defenders Joel Matip and Joe Gomez, is happy to see Van Dijk making progress but admitted the nature of the 29-year-old's injury means he still has work to do in his recovery.

"Good, very good. I have no problem with talking about Virgil van Dijk. It's very good but still a long way to go, that's this kind of injury," Klopp said.

"I'm happy when I see these videos, to be honest, because it just shows that he makes good progress. But it will still take a lot of time, that's how it is. I would like to say something else but these are the facts, unfortunately."

However, Klopp was able to welcome Thiago Alcantara back from injury in the goalless draw with Newcastle in midweek.

The Spain international made his long-awaited comeback as a 73rd-minute substitute and showed a variety of passing which immediately added a different dimension to the game, although he ultimately failed to help make the breakthrough.

Thiago was signed in September with the view to him being the key to unlocking tight games against defensively-minded teams but Covid-19 and then a knee injury in October's Merseyside derby restricted him to just a match and a half before Christmas.

The 29-year-old will be in Monday's squad for the trip to Southampton and could be in line for only his second start for the club, and Klopp is keen to see him continue to build on his fitness.

"We signed Thiago because we thought he is a good player, so you can imagine we would like to have him in the team, that's clear," said Klopp of the midfielder, who has already made 184 passes in 152 minutes of football.

"Yes, it's good, Thiago is a super player. From the 20 minutes he played, 12 were brilliant and then he felt the intensity, which is normal.

"He [had] trained only twice around the team so there is still some physical work to do, still some rhythm to get."