Jordan Henderson: Liverpool captain out until April after undergoing surgery on groin injury

Jordan Henderson suffered groin injury in Liverpool's 2-0 loss to Everton last weekend; club say captain has undergone surgery and will be out until after the March international break at the earliest; watch Sheff Utd vs Liverpool on Sunday, live on Sky Sports from 7pm; kick-off 7:15pm 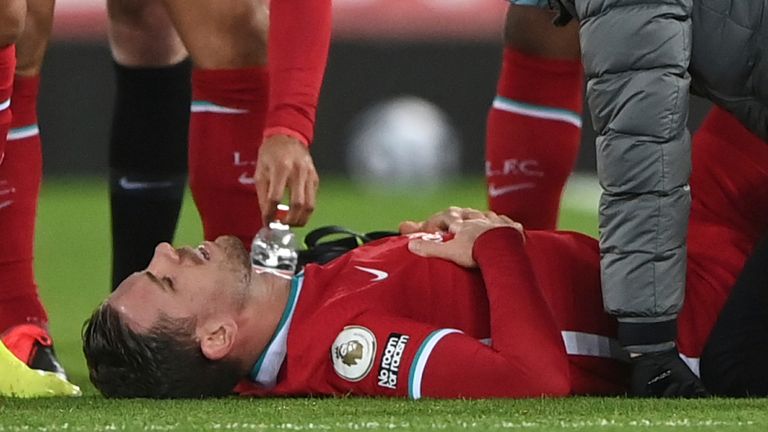 Liverpool captain Jordan Henderson has undergone surgery on the groin injury he suffered in the Merseyside derby and will be out until April at the earliest.

Henderson was forced off in the first half of Liverpool's 2-0 defeat against rivals Everton at Anfield last Saturday and, after being assessed by the club's medical staff, it was decided an operation was necessary.

A Liverpool statement read: "Following further assessment with the club's medical team, Henderson has successfully had a corrective procedure carried out on the adductor injury. He will begin a rehabilitation programme immediately.

"No specific timescale is being placed upon his return; however, the 30-year-old is ruled out initially until after the March international break.

"Henderson's recovery will be closely monitored by the club's medical department and his progression during his rehab work will determine when he is able to resume full training."

Henderson's injury means Liverpool will certainly be without their captain for the Premier League fixtures against Sheffield United, Chelsea, Fulham and Wolves.

Klopp spoke about the absence of Henderson and the effect it could have on his team at Friday afternoon's press conference. He said: "They all have to be influential, with so many injured players at the moment. Most of them are leaders in this group even when they are doing their rehab.

"The best-case scenario? I don't know, it is not a quick one but we all hope that there is still a possibility for him to play a few games this season but we will see."

In addition, Gareth Southgate will be without one of his key players for England's internationals next month, with his side taking on San Marino, Albania and Poland in World Cup 2022 qualifying. The news is yet another blow for Jurgen Klopp in a season in which injuries have hampered Liverpool's attempt to retain their Premier League title.

Virgil van Dijk and Joe Gomez both suffered serious knee injuries before Christmas and are uncertain to return this season, while fellow centre-back Joel Matip will definitely miss the rest of the campaign due to an ankle injury.

That forced Klopp to move Fabinho and Henderson from midfield into the heart of his defence. However, Fabinho has been injured for most of the past month, and Henderson is now also ruled out.

Klopp is now left with January signings Ozan Kabak and Ben Davies, plus Rhys Williams and Nathaniel Phillips, as his fit central defenders. The quartet have 11 Premier League appearances between them.

Carragher on Liverpool problems and criticism

Jamie Carragher has defended his criticism of Liverpool during the Premier League champions' astonishing slump and insisted injuries do not excuse their run of four consecutive home defeats. 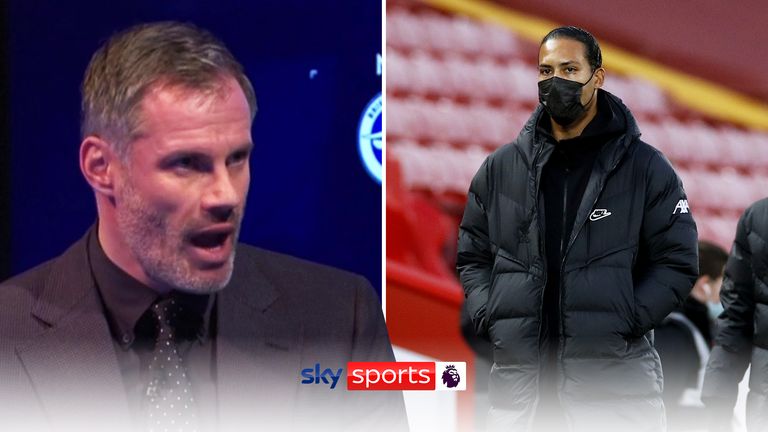 Jamie Carragher says that this Liverpool side has been so good that they should not be losing home matches to Brighton and Burnley, even if they have midfielders plugging their centre-back positions

Since January 1, Liverpool are 17th in the form table, with just seven points from nine games, including Saturday's 2-0 loss to Everton at Anfield.

Carragher told Sky Sports' Monday Night Football: "I said during commentary that l am sick of talking about Virgil van Dijk. And what l mean is that we have highlighted that throughout. Liverpool can't win the league. I said that after the last league derby game. They can't win the league with Van Dijk being out the whole season. That's the big picture.

"But the problems Liverpool have, with centre backs out and midfielders at centre back, does not mean they can't win home games against Everton, Brighton, Burnley, West Brom. Manchester United, maybe, and Manchester City are real top quality.

"It's not an excuse for individual games. No matter what problems you have as a Liverpool player, you can't not win at home for six games. That is not acceptable. It's not."