Arsenal manager Unai Emery insists he has the backing of the club's hierarchy in his continued stand-off with Mesut Ozil.

Ozil has not featured in Arsenal's last five matchday squads, with head coach Emery offering little explanation as to his decision to ostracise the highest-paid player in the club's history.

The German midfielder has posted a number of cryptic social media messages and insisted recently that he wants to stay at the club and will work hard to regain his place.

There has also been a groundswell of support for the 31-year-old from Gunners fans who have grown weary with a perceived lack of creativity within the team. 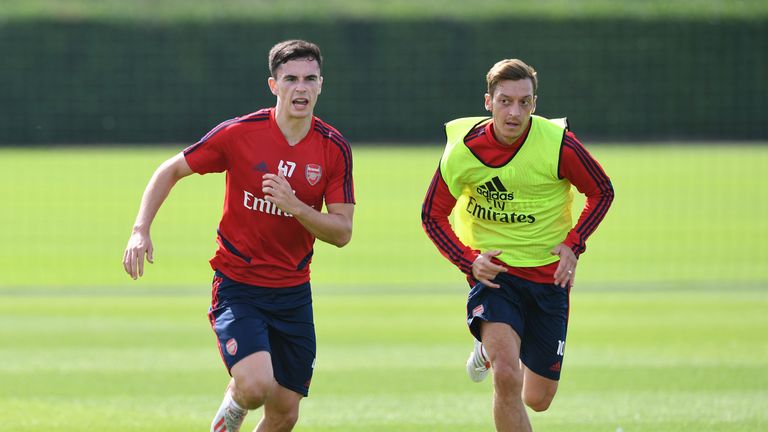 But Emery has revealed talks with those high up in the club saw an agreement reached that dropping Ozil was the right move.

"Here, we have one agreed strategy as a club and as a team," he said, when asked if there was any pressure from above to put Ozil back into the team.

"Because the most important thing is the club, the team and finding a performance. Previously we were all speaking between us to take that decision.

"We are going to play on Sunday and in the next matches and we are going to decide, and when we can speak about him something differently we will look."

One of the five players trialled in the No 10 role was Lucas Torreira, a defensive-minded player who has struggled to hold down a regular place under Emery this season.

Seeing the Uruguay international popping up on the edge of the box raised plenty of eyebrows in the win over Vitoria, but Emery explained that he is keen for Torreira to lead his pressing game.

"I was speaking with him about his best position to help us in our shape," said the manager.

"It depends on the shape. Last season his best position was playing as a deep midfield two alongside (Granit) Xhaka or Matteo (Guendouzi).

"This year we are playing also sometimes with just one, and he can achieve with his quality to get to the box and get closer to score and is very intelligent about getting space around the box and taking chances.

"Then also, when we prepare the team to do high pressing, for us he is very important because he is very intelligent tactically but he can play in the two positions - the two midfielders, he can play higher for the pressing and to get into the box.

"Sometimes we also use him as a one-man in midfield doing the covering for the two other players ahead."

Arsenal face Crystal Palace on Sunday at the Emirates Stadium, where their opponents can leapfrog them into fifth place in the table with a win.

"Ozil's been a failure at Arsenal since the moment he walked in the door," Ian Ladyman, Football Editor at The Daily Mail said on The Sunday Supplement.

"The only difference is that Arsene Wenger refused to see it. The one thing Unai Emery has got absolutely right is his approach to Ozil. He's not good enough, key enough, brave enough to play in a top Premier League team."

Charlie Wyett, Football Editor at The Sun, added: "He's got no future at Arsenal. That's quite obvious. It'd just be good if someone can pluck up the courage to get him out the club - but who is going to pay him £350k a week? He's not going to just walk away for free or be allowed to.

"And then equally a club who takes Ozil knows they're going to have to be really, really patient with him. If he does go to another club, it's not easy, even though he can be a terrific footballer.

"When he joined Arsenal I spoke to a few people in Germany and they said what a great player he can be, even then it was, 'he'll be good at Arsenal if he works hard enough'. He's always been that type of luxury player."