Bukayo Saka: Arsenal winger says choosing between England and Nigeria will be 'tough'

Saka is weighing up his options at international level after scoring four goals and making 11 assists in 38 games during his breakthrough season; Watch Arsenal vs Watford on Sky Sports Premier League from 3pm on Sunday; Kick-off 4pm 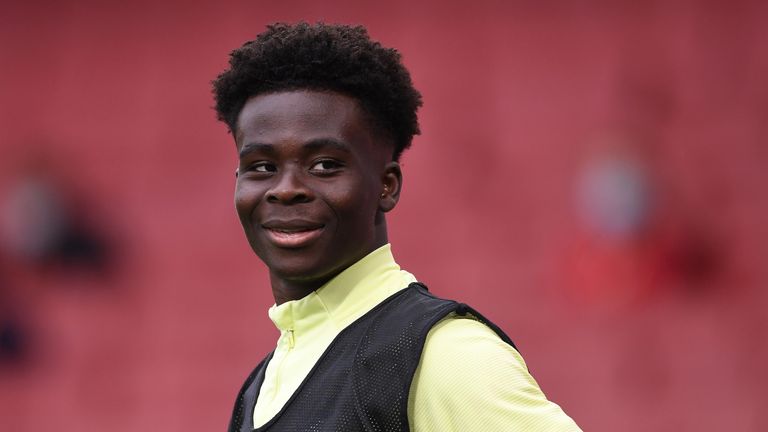 Arsenal winger Bukayo Saka tells Sky Sports News he is yet to decide between England or Nigeria.

Arsenal winger Bukayo Saka admits it will be challenging to choose between England or Nigeria, should his impressive Premier League form be rewarded with international selection.

In a wide ranging interview with Sky Sports News the teenager discussed a memorable few years rising through the ranks at Arsenal, including:

Saka is yet to receive a call-up from either England or Nigeria but he's attracting admiring glances from both associations.

For the modest but confident 18-year-old it is a decision that will require careful consideration with family members at the right time.

"It's a tough choice," Saka revealed.

"I'm happy to have represented England at youth level but I'm also proud of my Nigerian heritage from my parents.

"We haven't been picked by any team so it's about staying humble and when the time comes we'll make the decision."

Gareth Southgate has been keeping a close eye on Saka and Manchester United striker Mason Greenwood, while Jude Bellingham recently became the most expensive 17-year-old in history following his £25m move to Borussia Dortmund.

The future for England appears bright with Europe's top clubs and their current managers putting faith in the teenage sensations.

"Greenwood and Bellingham have so much quality. Whether they are 18 or 28 or 38 they've got quality and when you've got quality you're going to be in the team, providing you can apply the right attitude," Saka said.

"I feel the age isn't really a factor because they've got maturity and quality beyond their years. That's why they're being trusted I believe."

Mikel Arteta, like Unai Emery before him, is certainly placing his trust in Saka who has scored in the Premier League, FA Cup and Europa League during his 38 appearances this season.

"Being young and at a big club if you are in the team over an experienced professional the manager is basically telling you without speaking that I believe in you.

"(He's saying) go and do what you can do and that belief gives me so much confidence. Arteta is so detailed and clear and a lot of the players will tell you we are learning from him.

"I feel like we're going in the right direction and we're working hard to hit the ground running next season."

"I was so excited to get it. It's stuff you dream of and to think of the legends who have had it is such an honour," he said. Arsenal's new No 7 Bukayo Saka says wearing the famous shirt will not add any pressure onto his shoulders.

"I liked the number growing up because some of the best players in the world have worn it.

"It shows how much confidence they have in me and I want to repay their faith and hopefully can write my own history in that shirt."

In recent years the youngster has gone from watching Pierre-Emerick Aubameyang to assisting his goal at Old Trafford earlier this season.

The youngster added: "In the academy we got tickets to watch (the first team) and I used to see him scoring goals. To now be playing with him is just amazing.

"You know he's going to score a goal for us. He's such a good guy who helps all the young players with advice and he's also funny as well!"

Saka spoke in similar fashion about Arsenal legend Thierry Henry when the Frenchman gave a talk to the academy players a couple of years ago.

He revealed this particular session spent in the company of Henry was on his mind recently when he scored a first league goal.

"His mindset was just so elite," Saka explained.

"He told us about a day that Arsenal were behind and he wouldn't allow his team to lose before running past everyone to score!

"When he speaks to your face and you see in his eyes how passionate he is for the game and how much he wanted to win it shows why he was such a great player.

"You dream of trying to emulate a career like his. As a young player that just inspires you and that's why scoring against Wolves meant so much to me." 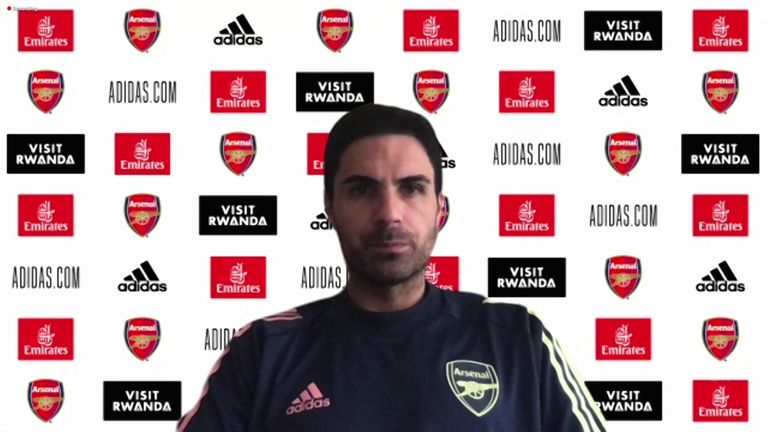 Arsenal head coach Mikel Arteta is asked whether winning the FA Cup and an eighth-place finish represents a good season for the club.

Next weekend Saka can emulate Norman Whiteside if he scores in the FA Cup final as an 18-year-old, and although Whiteside's record of youngest scorer in the decider is safe, it would be a proud moment for him.

"The chance to win a trophy in my first full season is amazing. If you told me last year all of this would happen I wouldn't have believed you!

"We have Watford to focus on first to try to build momentum. They are going to be fighting for their lives because they want to stay in the Premier League but we want to win.

"It would be a shame if we have to send them down but at Arsenal we have a winning mentality and want to win every game."

The "humble" teenager admitted he is feeling "blessed" after signing a new long-term deal earlier in July.

With his infectious positive attitude and raw talent the Arsenal No 7 shirt may be occupied for some time.