Vinai Venkatesham, the club's chief executive, has warned that online hate towards players is more widespread than previously known; Arsenal have launched a #StopOnlineAbuse campaign aimed at 'changing attitudes and making a difference every day' 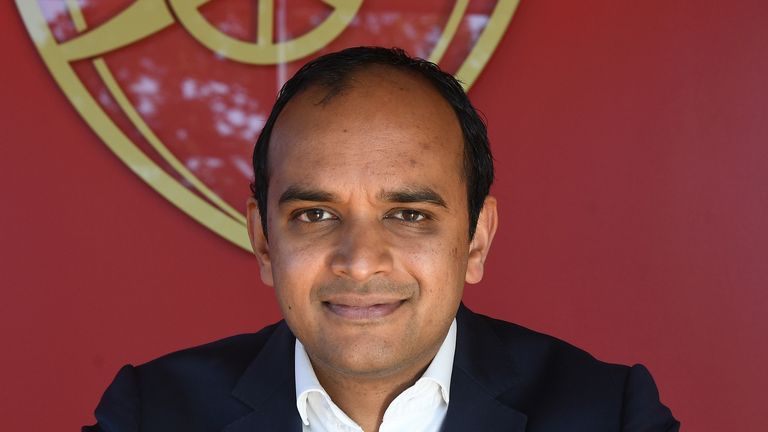 Arsenal would consider joining Thierry Henry’s boycott of social media - if more is not done to prevent online abuse towards their players. In a TV exclusive, the club's chief executive Vinai Venkatesham says 'nothing is off the table'

Arsenal would consider joining Thierry Henry's boycott of social media if more is not done to prevent online abuse towards their players.

Vinai Venkatesham, the club's chief executive, has said "nothing is off the table" and fears racist abuse on social media will become "normalised".

He has warned that online hate towards players is more widespread than previously known.

The club, which has chosen not to boycott its platforms at the moment, has launched a #StopOnlineAbuse campaign aimed at 'changing attitudes and making a difference every day.'

The action plan includes a taskforce to give emotional and practical support for players and using their fanbase and community work to help eradicate abuse.

In a wide-ranging interview with Sky Sports News on online hate, Venkatesham says he:

"We all have to acknowledge this has gone too far," he said. "There is a really dark side to social media, and we cannot accept that. I don't see that getting any better, I see it getting worse and we have to find a way to solve it. I'm not saying this is straightforward to fix.

"What I want to do, with others, is do everything we can to eliminate that dark side so we can continue to enjoy social media channels for all the positive things that they bring."

Arsenal have praised Henry, the club's record goalscorer, after he removed himself from social media this week due to rising levels of racism, bullying and discrimination.

Henry said the problem was "too toxic to ignore."

"I understand the decision that Thierry made," said Venkatesham. "I thought it was sad that Thierry felt like he had to do that. But I also thought that it was a really powerful message, and I congratulate him for that.

"I felt really sad that it has come to a point where a player of the profile of Thierry, and a human being, has decided that they don't feel social media is a safe environment."

The club has not ruled out a temporary suspension of its accounts but believe the most appropriate course of action is to use their considerable following on public channels to force change.

"I would say that nothing is off the table," conceded Venkatesham. "We have taken the approach that we feel is appropriate and use the power of the following that we have on social media to send, what we think, is a really powerful message around our campaign.

"It's not a press release, it's a series of activities that we are going to be doing and we will continue to highlight those on our channels. That doesn't mean there aren't other approaches available and I think everyone has to choose their own approach if they're trying to be pro-active."

When pressed on whether the club would consider a boycott, he added: "I don't think anything needs to be off the table. We've chosen not to take a boycott - clearly, that was something we could have done. Of course, we will continue to think about what measures we could take in the future to continue to highlight this issue."

"I'm going to steal Ian Wright's words here," said Venkatesham. "My biggest fear is that this type of behaviour becomes normalised. My biggest fear is you will have young, black, footballers who will just say, 'Being abused racially on social media goes with the territory of being a Premier League footballer.' That is unacceptable and we cannot stand by and allow that to happen. It is 2021 and we need to use this as a wake-up call.

"It's preposterous, in some ways, that we're having this conversation - that we are having a discussion about the fact that it could be becoming normalised that black players are getting racially abused, on all of our collective watch."

Abuse more widespread than made public

Arsenal believe discriminatory posts should be filtered and blocked before they are received, but social media companies say they do not monitor private communications (Direct Messaging).

Granit Xhaka, Eddie Nketiah, Willian, and Bernd Leno have been subjected to online hate this season, but other teammates have been targeted by abuse.

"I think it's fair to say that not all of the examples of abuse that players get is publicised," he said. "That's certainly the case at Arsenal and I suspect that is the case everywhere else. You see some of it but there is more under the surface."

Arsenal are holding more workshops with players to help them protect themselves by blocking users and muting offensive words and phrases.

Venkatesham revealed: "Part of it is giving some of our players a bit of social media training around some of the features, preferences, that they can set around their own social media account which might help the abuse, if it is received, not be seen by them or blocked before it gets to them.

"This issue gets talked about regularly at Premier League shareholder (club) meetings," he said.

"It unites every single one of the 20 clubs; everybody feels hugely strongly about this issue. We've had some passionate, and emotional, discussions because everybody is horrified by what they're seeing.

"We are all taking steps to do what we can to support our players."

Arsenal: ID checks for all users

Arsenal wants all social media users to be subject to verification that allows for accurate identification of a person behind the account.

The club also wants steps taken to stop a user that has sent abuse from re-registering an account.

"There is clearly something about the fact that the anonymous nature by which you can interact on social media is encouraging individuals to post this type of abuse," explained Venkatesham.

"I think social media is a force for good in very many ways. It enables better communication, people to get closer to other people, and it's also a way to 'shoot the breeze' with people who have similar interests to you.

"The problem has been the dark side, an environment that can be toxic, hurtful, discriminatory and we've seen disgusting messages sent that have had a profound effect on people. This is a situation that seems to be getting worse, rather than better."

Facebook says it acted on 6.6m pieces of hate speech content on Instagram between October and December last year, 95 per cent of which they found before anyone reported it to them.

Social media companies say millions of people around the world do not have access to official forms of identification and requiring ID to create an account would exclude them from their platforms.

Twitter and Facebook have representatives in an online hate working group, which was convened by Kick It Out and includes the Football Association.

If you see a reply to Sky Sports posts and/or content with an expression of hate on the basis of race, colour, gender, nationality, ethnicity, disability, religion, sexuality, age, or class, please copy the URL to the hateful post or screengrab it and email us here.