Thomas Partey: Arsenal midfielder reveals he is his own worst critic and vows to deliver greater consistency

Thomas Partey admitted he is his biggest critic and added he is still adapting to the demands of the Premier League; follow Everton vs Arsenal in our dedicated live match blog and watch live on Monday Night Football on Sky Sports Premier League from 7pm; kick-off 8pm 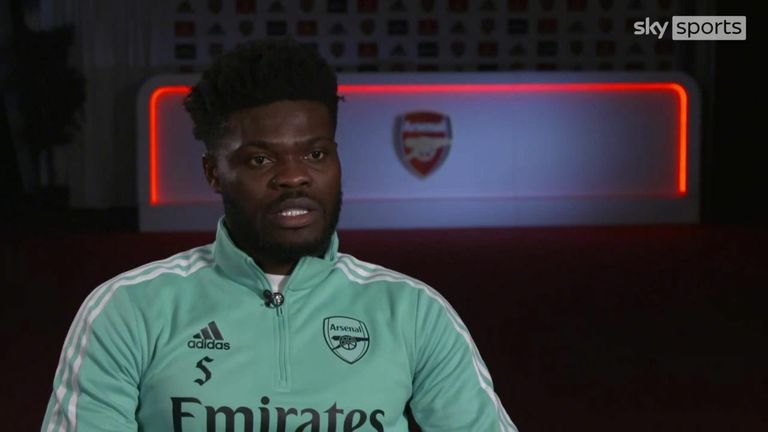 Thomas Partey revealed he is his own worst critic and vowed to deliver better and more consistent performances from the Arsenal midfield.

Partey arrived from Atletico Madrid in October 2020 after Arsenal triggered his £45m release clause, but he spent much of his first season adjusting to life in the Premier League without fans, all while battling injury setbacks.

The 28-year-old, who was limited to 18 league starts last season, gave an honest self-assessment of his first year at the club and feels there is more to come from him at both ends of the pitch.

Partey told Sky Sports News: "I give myself four [out of 10], because there are moments I can really hurt the other team but there are also moments where I allow myself to lose focus and that's when everything goes down.

"This is when you realise that you have to get better."

An ankle injury in pre-season saw Partey miss Arsenal's first three fixtures of the season, but the Ghana international believes he will begin to benefit from an extended run in the team.

He also promised to work on his consistency after a mixed performance during the 3-2 defeat to Manchester United, and is confident improvements will come with hard work.

"From the start [of the Manchester United game] I had a couple of moments where I gave two balls away and someone watching on TV from home or in the stadium, it is normal that they see this," Partey added.

"At the end, I have to be happy with some moments, I have to learn from the bad parts and try to do better. I think they demanded more and personally I know I can give more. I have to keep working and at the end I will get the results."

Manager Mikel Arteta has even challenged Partey to become a 'boss in midfield' and use his experience and leadership to guide what is still a relatively young side.

"From the defence to the attack, I can help the team a lot," Partey said.

"I have to read more of the game. Now I am having a lot of continuous games, it is normal that some games, or some moments in the games, I will be down.

"With more games, with more confidence, I will be able to get to where I want to be."