Arthur: Potential Arsenal target's future to be decided by Juventus after Supercoppa final

Arthur, thought to be among a number of midfielders Arsenal are looking at, to have his future decided after Juventus' Suppercoppa final with Inter Milan; Arthur has played seven league games this term; Crystal Palace's interest in striker Eddie Nketiah could hinge on Jean-Philippe Mateta

Juventus are expected to make a decision on whether Arthur Melo can leave on loan after Wednesday night's Supercoppa final against Inter Milan.

Arthur is thought to be one of a number of midfielders Arsenal are looking at this month and the Gunners have been in contact with the Italian giants about a temporary move for the former Barcelona player.

Manager Mikel Arteta admitted last week Arsenal want to strengthen in midfield. Arthur is also understood to be willing to make the move to the Emirates in an attempt to resurrect his chances of a Brazil national team call-up.

Juve boss Max Allegri is said to be unsure about letting him go, however.

Arthur has made only seven Serie A appearances this season but played four out of six Champions League group games.

Juventus would consider a move for Chelsea's Ruben Loftus-Cheek if they allow Arthur to leave in this window, Sky in Italy are reporting.

The club want to move some players out to fund other signings. They have a number of central midfield players including Aaron Ramsey, Adrien Rabiot, Rodrigo Bentancur and Manuel Locatelli.

Lyon's Bruno Guimaraes and Lille's Renato Sanches are among their other targets, but signing them this month is expected to be too difficult and too costly.

Juve are also looking at a striker to replace the injured Federico Chiesa, who has undergone surgery on an ACL injury he suffered against Roma.

Sardar Azmoun - a Zenit St Petersburg player who is also on Newcastle's list - is the top target, but they also have an interest in Memphis Depay at Barcelona, Maxi Gomez at Valencia, and Mauro Icardi at PSG.

"The latest information on Bruno Guimaraes is that lots of big clubs are interested in signing him. He's playing really well at Lyon at the moment. He was in the Brazil squad that was named on Thursday.

"When it comes to valuation, he would cost up to about £40m because he's only 24 years old.

"I put the question to somebody close to him, 'could you see him moving to Arsenal this month?' They said it's probably difficult for it to happen this month but anything can happen in the summer.

"There are lots of other clubs interested in him, like Juventus for instance. He's got a big, big future."

Palace move for Nketiah could hinge on Mateta

Crystal Palace's efforts to sign Arsenal's Eddie Nketiah this month could hinge on the future of on-loan striker Jean-Philippe Mateta.

Mateta has six months remaining on an 18-month loan from Mainz but has been linked with a move away from Selhurst Park.

Palace have a long-standing interest in Nketiah and would need to pay a transfer fee if they want to sign the player this month or pay a compensation fee if they take him as a free agent at the end of the season. Borussia Monchengladbach are in talks with Nketiah's representatives over a pre-contract. 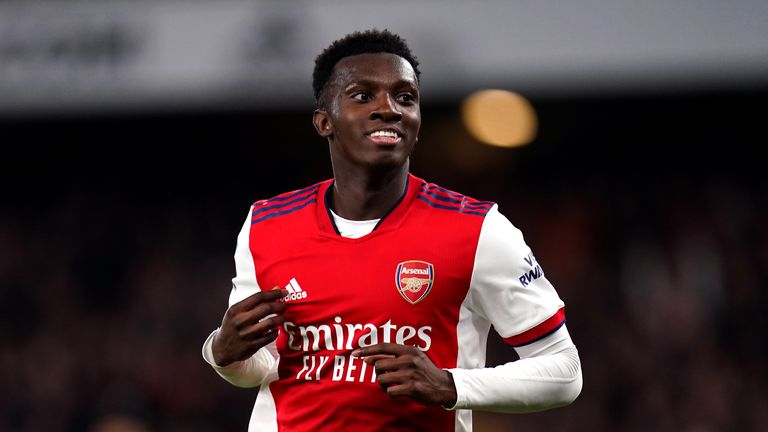 Arsenal boss Mikel Arteta says that Eddie Nketiah is under contract and will stay with the club and adds that it was the right thing to do to let Ainsley Maitland-Niles move to Roma.

Speaking to reporters on Wednesday, Arsenal manager Mikel Arteta played down chances of an imminent departure for the striker, who rejected Arsenal's offer of a new contract in November.

"He's our player and he's going to stay with us," Arteta said.

Arteta says the world's best players still want to sign for Arsenal, regardless of whether they are in Europe.

Arsenal, who have not qualified for the Champions League since 2016, are yet to sign anyone this month, but are interested in a deal to bring Fiorentina striker Dusan Vlahovic to the Premier League.

The striker, who in 2021 equalled Cristiano Ronaldo's record for Serie A goals scored in a calendar year, is understood to prefer a move to a Champions League side. 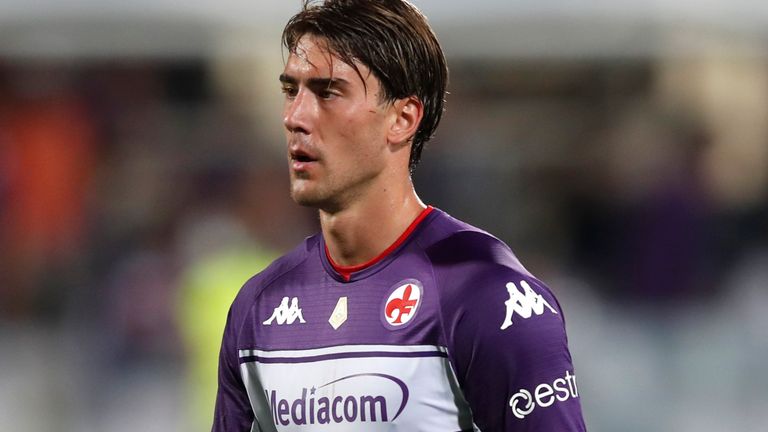 But Arteta insists the north London club, who are currently fourth in the Premier League, still have big pulling power among world-class talent.

"I consider that situation hasn't changed. That is one of our biggest powers.

"Every time I have spoken to any player they were so willing to come, I have not faced any other situation.

"Our capacity to get the attention of people to come to our club, is something that is a big advantage for us."

Arsenal to consider offers for Mari and Chambers

The pair, who have not featured in the Premier League since August, have found playing time limited this season and do not appear to be part of Mikel Arteta's long-term plans.

Arsenal signed Mari permanently from Flamengo for £8m in August 2020 after taking up an option to buy following his £4m loan move in January 2020.

The Spaniard was Arteta's first signing and has two-and-a-half years left on his contract.

Meanwhile, Chambers could be set to end his eight-year spell at the club as he enters the last six months of his deal.