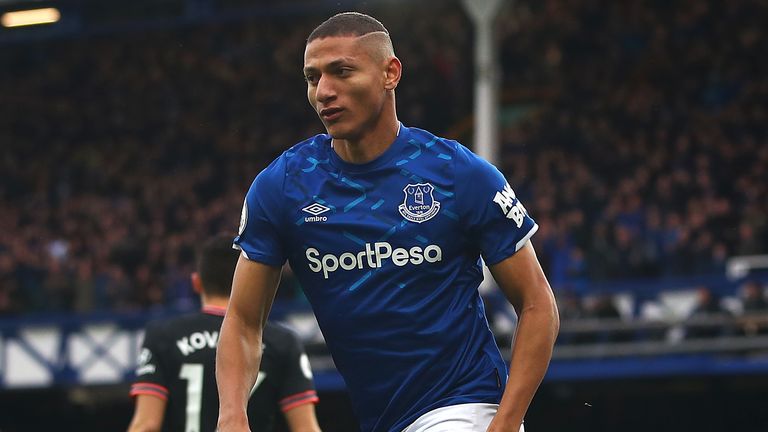 Sky Sports News reporter Rob Dorsett brings the details of Barcelona's 'extraordinary' €100m (£85m) bid for Richarlison, which has been rejected by Everton

Everton have turned down an offer of €100m (£85m) from Barcelona for Brazilian striker Richarlison.

Everton rejected the offer immediately, unwilling to sell one of their prized assets as they look to strengthen their squad - rather than deplete it.

Richarlison is a long-standing target of Barca's sporting director Eric Abidal, who enquired about the 22-year-old's availability last summer but saw those advances knocked back.

Abidal believes Richarlison, who signed a new five-year deal at Everton in December, would complement Luis Suarez's style of play.

Barca, currently three points behind La Liga leaders Real Madrid, are looking for a striker to strengthen their squad after Suarez was ruled out for four months following knee surgery earlier in January.

Richarlison joined Everton for £40m from Watford back in July 2018, and has scored 24 goals in 60 appearances, including 10 in 27 games so far this campaign.

On Tuesday, it emerged Barca had also missed out on Valencia striker Rodrigo.

The Spanish champions have until Friday to bring in a forward this month, with La Liga's transfer window closing at 11pm GMT on January 31 - the same time as the Premier League.

"The bid came in earlier this week. There was no discussion here - it was immediately rejected by Everton. They want to add to their squad under Carlo Ancelotti.

"Everton bought him for £40m. This offer is more than double your money in 18 months, but the club see Richarlison as an absolutely key part of Everton's future.

"He's only 22 years old and they were prepared to turn that sort of money down. £85m from Barcelona. It is quite extraordinary."