Everton host Liverpool in the Premier League this Saturday, exactly 10 years to the day since their last Merseyside derby success. Leon Osman tells Sky Sports what a victory could mean for his former club

Leon Osman was a member of the last Everton side to taste victory in the Merseyside derby, precisely 10 years ago this Saturday.

CeeLo Green was top of the UK charts with 'Forget You', and it has been a forgettable decade for the blue half of Merseyside when it comes to renewals with their hated neighbours.

Everton consigned Liverpool to second from bottom in the Premier League as goals from Tim Cahill and Mikel Arteta settled the 214th derby in the same week their rivals were welcoming new owners.

Seamus Coleman is the sole survivor from the team that won 2-0, but very little else has remained the same since those days under David Moyes at Goodison Park. It has been a turbulent 10 years for Everton, but after collecting maximum points from their opening four league games this term, the tide is turning.

Ahead of the weekend's clash, Sky Sports' Ben Grounds caught up with former midfielder Leon Osman to dissect how Carlo Ancelotti has brought the feel-good factor back and how the 10-year hoodoo can finally be brought to and end... 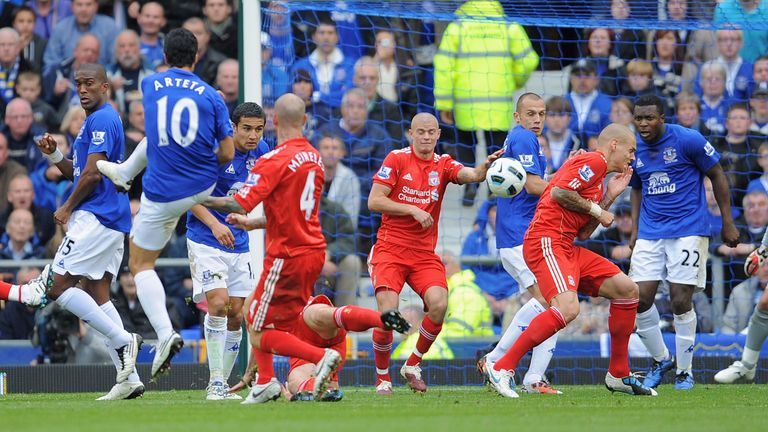 We take a look back to 2010 as goals from Tim Cahill and Mikel Arteta led Everton to victory over Liverpool at Goodison Park, their last Premier League win over their Merseyside rivals.

"We were together under David Moyes for so long that we had good spells and bad spells," Osman told Sky Sports. "They were mostly good spells, but there were time when we had tough runs and we didn't start seasons very well. Both teams were in the bottom four but I remember going into the fixture expecting to win.

"The derby feeling that Liverpool have gone 10 years without tasting defeat in any kind of derby was just unheard of at that time and we would never have expected it. It might have been a season or two since we'd won one, but we were going in there thinking we could come away with the victory.

"It was our day, scored good goals and deserved the win. To finish that fixture and then say we wouldn't win another derby for 10 years is quite frightening.

"It's crazy to think it's been 10 years since we beat them. Hopefully with it falling exactly 10 years to the day, it's a good omen and winning a derby is something we can put behind us on Saturday." FREE TO WATCH: Highlights from Everton's win against Brighton

"Carlo came in around Christmas time last year after Duncan Ferguson had brought the confidence back during his time as caretaker manager, and things were progressing in the right way. The team were winning games and were improving after being pretty poor under Marco Silva.

"Slowly, but surely, you could see that he was turning things around. The lockdown didn't help the momentum of the team… they struggled to really get going towards the end of last season. But the level of optimism on the outside among supporters at the start of this season I'd say wasn't as high as it was within the squad.

"Seamus Coleman, as captain, wanted to make sure all the players understood the history of the club and exactly what it means to play for Everton. But you also need that bit of confidence and belief back in the squad, and that's what the signings have done.

"Bringing in James Rodriguez, Allan and Abdoulaye Doucoure has brought a real belief in the project under Ancelotti. Suddenly, those that were there before have not only raised their game to play alongside them but players are seeing the direction the club is going in and that generates belief.

"I feel this was all set up when he first came in. In his first six months in charge, Ancelotti was putting the building blocks in place. He was making sure the players knew what was expected from them and he had in mind the system that he wanted.

"It has just taken a transfer window to get the right pieces to fit in to the way he wants Everton to play. He's picked some fantastic players to come in and help take the club forward."

"There's now better depth but only because the standards have been set higher. The teams that were put out against Salford and Fleetwood [in the Carabao Cup] were pretty much our first team last season, but the extra quality that Carlo has brought in means it no longer is.

"Last season, we didn't see the best of Fabian Delph or Gylfi Sigurdsson. People were starting to question whether Tom Davies still had room for improvement but bringing quality into the squad has raised the standards of everyone.

"The player to benefit the most from James' arrival has been Sigurdsson. He's been terrific in all the games I've seen him. He's got an intelligent player in James to pass to and when you're his type of player, most of his strength is in his mind. 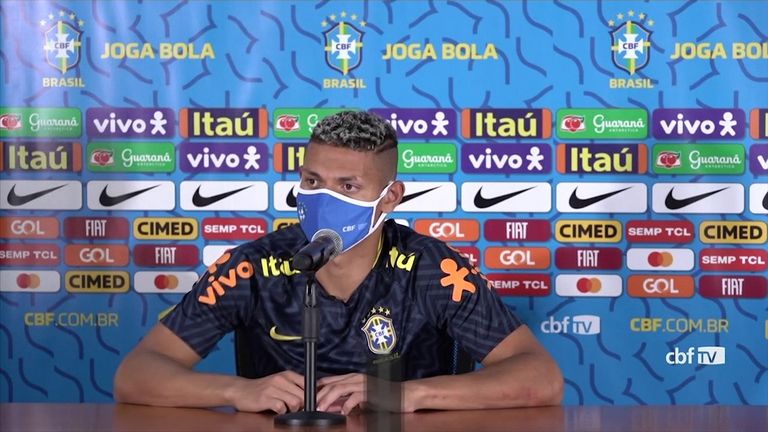 Richarlison says he is improving under Everton boss Carlo Ancelotti in the Premier League after Brazil's 4-2 win over Peru in their World Cup qualifier.

"He's such a quick thinker, and you need players of a similar ilk around you to understand how you're going to play and I feel he's benefitted massively from his arrival.

"It has filtered throughout the squad, as everyone knows their levels have got to be high in every match otherwise they'll be out of the team. Davies came into the team last week, played really well and finished the game at right-back without us losing any quality."

"Lockdown and Project Restart affected players and teams in different ways and Dominic Calvert-Lewin seemed to find it tough to get going again towards the end of last season but he's been working hard in the short period before the new campaign.

"Including pre-season, his 45 minutes away to Fleetwood and the recent run-out for England against Belgium are the only games in which he's not scored.

"He keeps meeting the challenges put ahead of him and his rise has been fantastic. He's got all the attributes that you'd want from a striker. He can cover the distance quickly, he's strong and he's got an incredible leap. He's got a great intelligence and before he just needed to become more ruthless in front of goal.

"He needed to find that desire to get 20-plus goals a season and have targets that he must achieve in his own head. I think Dominic of 18 months ago was just delighted to be out on the pitch, but now he's taking on the mantle of not only being Everton's No 9 but he now sees himself as the guy who's got to score the most goals in this team.

"It's been a great journey watching him develop and I'm hoping as an Evertonian that it's only the very start."

The unique talent of James Rodriguez

"James Rodriguez is a unique talent and I've really enjoyed watching him. The vision he has is incredible… some players have great technique and others have great vision. Some are great at making passes, but he manages to combine all of them very quickly in his head.

"He makes what he sees come to fruition, and what I've enjoyed the most is that there's been no sense of arrogance coming to a club that is trying to rebuild.

"He's played for Real Madrid and Bayern Munich, and there have been times in the past at clubs where players have felt too good to be at a perceived lower level. This man certainly hasn't. James has loved being part of the team and you can tell from the way the team are celebrating goals together.

"There's real meaning and there's genuine enjoyment in each other's goals and successes. He's obviously got ability, but he already seems to be a really important character in the dressing room that has bought into the project.

How Liverpool are beatable

"The team that defends the best will win the game. Both teams have incredible ability going forward - Everton are scoring goals at will and Liverpool have always had the ability to score at any moment of a game.

"But both teams have shown they can improve defensively. Everton have beaten West Brom 5-2 and Brighton 4-2 so there is still the opportunity to tighten up. Liverpool have just conceded seven so whichever team is better defensively will win the game.

"Liverpool's full-backs like to get forward into wide areas so Everton need to try to take advantage of that on the transition. It could be a cat-and-mouse game of tactics. Do you try to get in behind their full-backs when they go up?

"It depends on how brave Everton are with keeping players up in those wide areas which will give Trent Alexander-Arnold and Andrew Robertson something to think about."

What would derby success mean?

"There have been derbies down the years where we've felt we've got a good chance, where you're a bit more optimistic about them than others, but we couldn't have started this season any better.

"We've won four league games and three cup games on the run, and we've brought in quality players who affect games at both ends of the pitch. We've signed players with real magic so it's time to be optimistic.

"Liverpool showed last week that they're fallible having been beaten 7-2 away from home against Aston Villa so why not think we can win?

"Beating them would be massive for the belief it would bring to everyone connected to the club. For the likes of Allan and James Rodriguez, maybe it won't make too much difference to them.

"But for those players that have lost a number of Merseyside derbies, it has become a weight around their necks, so it would breed so much confidence.

"It would also underline that these first seven games weren't a fluke, and that this is what these players are capable of doing. It would show this is a quality team moving in the right direction and anything is achievable."

Follow Everton vs Liverpool this Saturday in our dedicated live match blog from 11am; kick-off is at 12.30pm. Highlights will also be published on the Sky Sports digital platforms and the Sky Sports Football YouTube channel shortly after the final whistle.