Football Ventures have completed their takeover of Bolton Wanderers, the club's administrators have confirmed

Football Ventures have completed their takeover of Bolton Wanderers, the club's administrators have confirmed.

The EFL announced on Tuesday night it had given Bolton's administrators 14 days to either sell the club or prove they could fund them for the rest of the season.

The club would have been withdrawn from the Football League if they failed to meet the deadline, but that situation has now been averted.

Bolton's joint-administrator Paul Appleton described the process as "one of the most complicated administrations I've been involved with".

He added: "I'm delighted to say we have finally reached a satisfactory conclusion with the sale to Football Ventures.

"At times, some of the hurdles appeared insurmountable and the frustration felt has been immense, not least by the supporters who have had to endure too many weeks of uncertainty."

In a statement, Football Ventures said: "Throughout this lengthy and complicated process, we have remained focused on completion of the deal and nothing else.

"At times it has been difficult to keep our counsel, but we took a decision to remain on the sidelines even when further damage was being inflicted by delays outside of our control.

"Our thoughts were always with the club staff and supporters, and we worked tirelessly behind the scenes to find an agreement and prevent even more stress and uncertainty for those who have suffered far too much over the past months. "Now we are excited to begin restoring this magnificent football club to its rightful position, securing its future for the fans, the loyal club staff and the players.

"It is now imperative that we commence the process of appointing a manager and strengthening the team with the right players to take the club forward."

Appleton also reserved special praise for the Eddie Davies Trust, the PFA and the EFL, saying: "I would like to pay particular tribute to the Eddie Davies Trust and their legal team who, throughout this whole process, have been willing to do everything in their power to ensure Eddie's incredible legacy was maintained and not sullied.

"Even at the 11th hour when other parties were content to renege on their agreements, the Trust realised the very existence of Bolton Wanderers was at stake and were willing to find a compromise to save the club."

Appleton hit out at former Bolton owner Ken Anderson, accusing him of "hampering and frustrating" the deal, and warned there will be "difficult times ahead".

However, he thinks Football Ventures "will run the club for the good of the supporters and the community as a whole", adding, "for everything the fans have had to endure, they deserve nothing less".

Bolton began the season on minus-12 points after being placed into administration, and manager Phil Parkinson and his assistant Steve Parkin resigned earlier this month.

Following Football Venture's takeover, the EFL has confirmed Bolton are no longer in administration and that their notice of withdrawal from the Football League has been withdrawn. 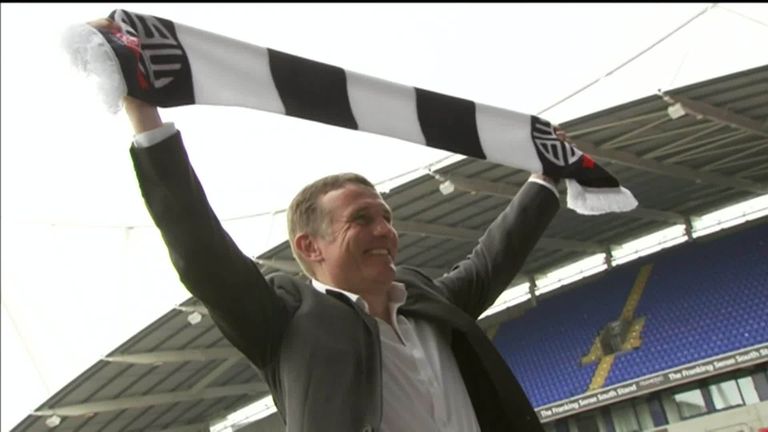 Debbie Jevans, the EFL's executive chair, said: "These past few months have undoubtedly been challenging and, at times fraught - never more so in the past few days - and I would like to thank all parties for their efforts in achieving the desired outcome.

"I would also like to place on record my grateful appreciation and thanks to the players, former and present management, staff and supporters for their patience and understanding in allowing us to get to this point.

"Everyone at the EFL is now looking forward to working with the new ownership during the 2019/20 campaign and beyond."