Ahead of a potentially season-defining trip to Liverpool this weekend, Tottenham manager Mauricio Pochettino has claimed it is unfair to compare his side with opponents still challenging for the Premier League.

Pochettino takes third-placed Tottenham to Anfield on Super Sunday with 15 points currently separating the two teams, although the north Londoners do have a game in hand on their hosts.

However, the two clubs have completely different philosophies, according to the Argentine. 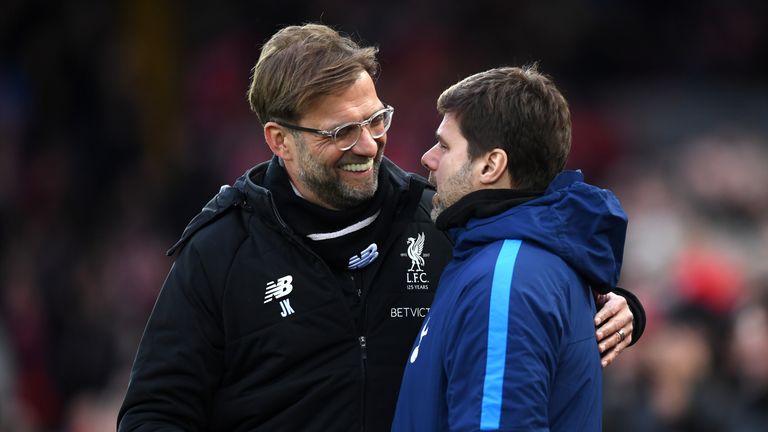 "You cannot compare (Liverpool and Tottenham)," Pochettino said in an exclusive interview with Soccer Saturday.

"When he [Klopp] arrived at Liverpool, it was only about focussing to try to build a team to be able to compete and be a real contender with other teams.

"Because we are focussed on different things, that is why we are different, and we must be focussed on operating in different ways, but always being competitive as football is the most important thing in this company.

"Because they have an unbelievable squad (they are challenging for the title) and they are a team who every season were adding more quality. So it is normal that Liverpool, Man City, Man Utd, Chelsea were building to win and be a real contender."

Spurs may head to Merseyside looking down now, rather than up, leading city rivals Arsenal by just a point and fifth-in-the-table Manchester United by only three points in the race for next season's Champions League.

And yet, Pochettino's side were being talked of as potential champions as recently as February 23, when a surprise 2-1 loss at struggling Burnley put an end to such chat.

"Only in the last few games did they start to increase the gap," he said. "We did not cope with the pressure on this type of game.

"But from the beginning, we were always there, fighting in a very good position. We are still in a good position, but it is true that today the gap is a little bit big.

"But we have enough quality to beat them [Liverpool] and fight for big things and all is possible. Of course it is going to be tough and the challenge now on Sunday is to beat them at Anfield, where they are unbeaten."

Spurs maybe without a win in their last four league matches, but Pochettino is hoping the recent international break has come at the right time for his players.

"We are disappointed with the way we competed in the last few games," he said. "There was a disconnection before Burnley that the team did not collectively find the way to fight for the same objective.

"We were a little bit distracted and I hope these three weeks we did not compete made us think a little bit, we were talking a lot.

"And now we must try again to reconnect and start to perform like we need to perform if we want to be real contenders for the Champions League and the Premier League."

After Sunday afternoon's clash at Liverpool, Spurs face a hectic period that also includes their first encounter at their new stadium on Wednesday, followed by a triple-header against champions Manchester City - including a mouthwatering Champions League last-eight tie - that could ultimately define their season.

Now, with the new stadium, we will try and be real contenders over the next few seasons

"This is a decisive period now, but not just for Tottenham, but for every team that are fighting for different objectives," Pochettino said.

"It is going to be the most important period, I hope that the new stadium has a big impact on us and help us achieve all that we want."

Looking further down the line, though, Pochettino predicts a bright future for his "overachieving" team and one where, without being financially burdened by moving to a new stadium, they will be able to challenge the likes of Liverpool and City for the top prizes.

"We were focussed on different things and we were there every season after season and now, with the new stadium, we will try and be real contenders over the next few seasons," he said.

"Because we have moved from White Hart Lane to Wembley, while also focussing on building the new stadium and training ground. And you know very well that when you are focussing on different projects, it is not easy to be a real contender.

"But because we have a very good squad and players, we were there and fighting. And we overachieved for all the circumstance because of the amazing quality we had in the squad."