Pochettino: "We are in the process to build and we will see if we have the time to build what we want"

Mauricio Pochettino fears he will not be given time to rebuild Tottenham through their transitional period after another lacklustre Premier League showing.

Sheffield United overcame VAR controversy to grab a 1-1 draw at Spurs after having a goal ruled out for John Lundstram's big toe being offside, with Tottenham again lacking inspiration.

Pochettino was able to start a midfield containing summer signings Giovani Lo Celso and Tanguy Ndombele for the first time in the Premier League this season but it did not inspire a change in intensity levels as the Blades looked the better side for the majority.

The result leaves Tottenham 12th in the Premier League after 12 games and they sit 11 points off fourth place. 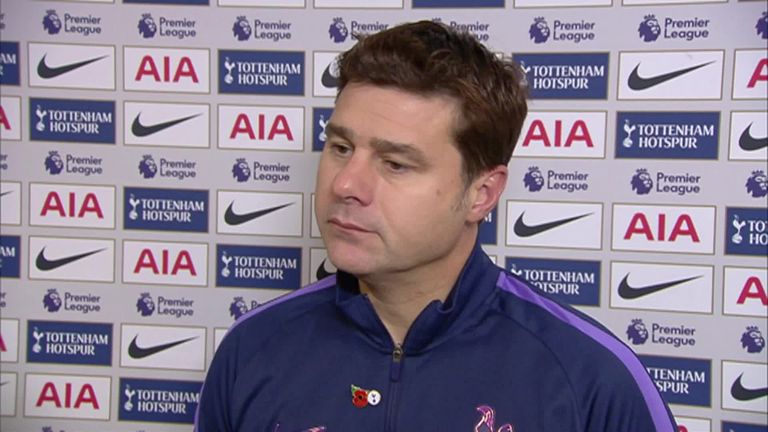 Pochettino conceded Spurs are in a transitional period and it will take time to build a team capable of hitting their previous heights.

He said: "We need to find a balance. We are building a team when we play in the Champions League and the Premier League, the toughest league in the world. It is dangerous as situations like this can happen. You expect better results than you get.

"We are in the process to build and we will see if we have the time to build what we want."

FREE TO WATCH: Highlights from Tottenham's 1-1 draw with Sheffield United in the Premier League

Despite being second best for the majority, Spurs took the lead through Heung-Min Son but the Blades thought they had equalised when David McGoldrick struck two minutes later. However, after a near four-minute wait at the centre circle, VAR overturned the goal as it was deemed Lundstram's big toe was offside in the build-up.

Chris Wilder's men were right to feel hard done by but remained the more creative team and found a way through when George Baldock's cross from the right flew straight in (78) as Spurs just could not match United's intensity and willingness to press in midfield.

"It was an even game, when you assess the game it was a fair result, they deserved the point," Pochettino said.

"They were the better team in the first half and were better in the second half. We started the game not well, it was a little bit strange the feeling of Tanguy Ndombele, he never felt comfortable in the game and maybe that affected the team.

"We arrived to the first half and we changed for Harry Winks and then we played better. We are disappointed because we knew we were going to find a team who would be aggressive and very energetic, well organised. This is the worst opponent you can have when you come to play from Wednesday in the Champions League, a very long way.

"I am disappointed because in the moment we broke them down to lead 1-0 in the second half, not keeping that advantage or scoring the second goal in that moment when we dominated the game. We feel so disappointed, I don't know the word to use. Upset or frustrated, but it is not a happy feeling."