Aston Villa's summer spending was no "trolley dash" according to chief executive Christian Purslow, who told Sky Sports News the club had an "obligation to be competitive" in the Premier League.

Villa spent £144.5m on 12 players following their promotion to the top-flight, with five of those new recruits starting in their opening-weekend defeat at Tottenham on Saturday.

Only Manchester United spent more among Premier League clubs in the summer window, while Villa topped the net expenditure after recouping nothing in sales.

But Purslow defended Villa's activity, stressing the additions were necessary to compete at the highest level and boost the club's "future financial health".

He told Sky Sports News: "It is a lot of money, and I'm incredibly grateful to our owners, but a couple of important points. Firstly, at the end of last season we had 12 players leave Villa, so we would have been starting with 10 players had we not bought.

"With or without promotion, Dean Smith and Jesus Garcia Pitarch came to Aston Villa with the certain knowledge we would be rebuilding our club this summer.

"It's essentially 12 out, 12 in. £127m (before add-ons) is a huge amount, but it is about a year's worth of television money. My board and I feel strongly that in the Premier League we have an obligation to be competitive, not to be promoted to the Premier League, spend no money, take some TV money, say thank you very much and go back down probably.

"We feel like we've invested to try and make our great club competitive in the Premier League. At £10m a player, that does not feel like an enormous amount of money spent. 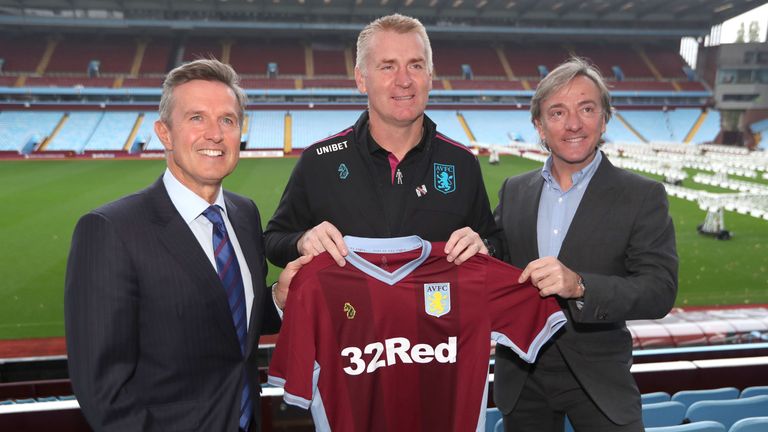 With or without promotion, Dean Smith and Jesus Garcia Pitarch came to Aston Villa with the certain knowledge we would be rebuilding our club this summer.

"We bought a goalkeeper at 33, Tyrone Mings at 26, the rest of the 10 are all 24 and under. Young players we hope will establish themselves in the Premier League and in doing so, grow their value.

"So far from being a liability, we are trying to invest in assets that grow their value, to protect the future financial health of our football club."

Villa's approach in the transfer market has drawn comparisons to Fulham's ultimately futile attempts at staying in the Premier League last season.

Fulham had a net spend of £100m heading into the 2018-19 campaign, but immediately returned to the Championship after finishing 19th with 26 points.

And while Purslow refused to be drawn on Fulham's policy, the former Chelsea and Liverpool director stressed Villa did not implement a "trolley dash" mentality, but instead focused on bringing in players either familiar to head coach Dean Smith, or that had been scouted diligently last season.

"I wouldn't comment on another club's transfer policy, and I'm not briefed on the fine details of Fulham, but I am extremely close to our policy," Purslow added.

"Of the 12, four players were with us last season, loans that we converted into transfers. Three players had either played for our coach at Brentford or had been about to sign for Brentford, so that's seven of the 12.

"This is not: find a footballer, bring him to Birmingham and hope he works well for Dean Smith. These are players intimately familiar to our coach and our coaching staff.

"We had a scouting department put in place from last October. All the players we signed were watched by our coach, by our sporting director, very frequently.

"Most of our business was done very early in the window, so those new players who hadn't played for Dean before were in the building, going on our overseas training camp in America and maximising the time they had to familiarise ourselves with our great club.

"I feel very confident that it was thought through, it was strategic, it wasn't last-minute, trolley dash, collect a footballer. I haven't met a single Villa fan who is worried about the fact our great football club has 12 fantastic new players to go alongside the spine of a team that won 10 games in a row back in February to April."

Villa will look to bounce back from their 3-1 defeat at Spurs when hosting Bournemouth on Saturday before welcoming Everton to Villa Park for Friday Night Football on August 23.