Steve Bruce: Newcastle's injury situation is worst I have seen 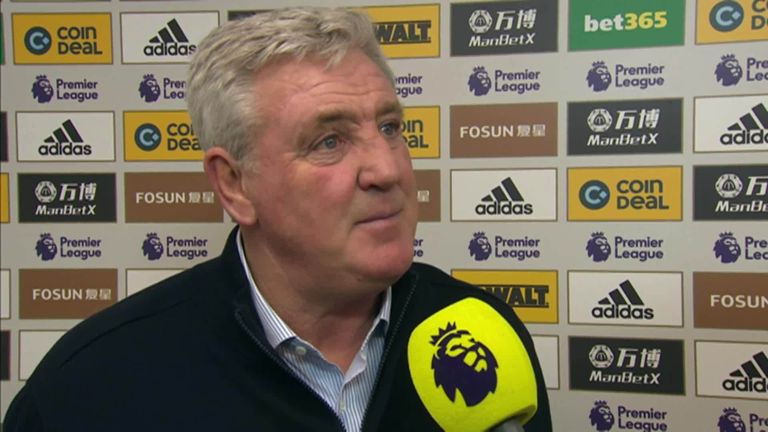 Steve Bruce says Newcastle's current injury situation is unlike anything he has ever seen before as a manager.

Having suffered four injuries during their defeat to Leicester on New Year's Day, Newcastle were forced to take off Paul Dummett and Dwight Gayle before the 30-minute mark in their 1-1 draw against Wolves.

Their injury list is now into double figures and Joelinton and Miguel Almiron both also appeared to be playing through knocks against Wolves.

"I've been going 40 years and never really seen a situation like what has unfolded in the last couple of weeks," Bruce told Sky Sports.

"In the Leicester game we lost four players in 12 minutes. I thought today it was going to be a repeat." FREE TO WATCH: Highlights from Wolves' draw against Newcastle in the Premier League

Speaking in his post-match press conference he added: "Are we just unlucky or is there a reason why? I've got my own ideas, I keep telling everyone it's the amount of games we play and when you play people fatigued you risk that trouble."

Newcastle could bolster their ranks with the signing of Ademola Lookman this month, but Bruce says he will not just make signings to fill out the squad.

"I won't just sign bodies, if there is someone to help us and make us better we'll try that. It'll be wrong for the club just to sign bodies."

'Gayle showed what a good player he is'

Despite their injury issues, Newcastle battled to a hard-fought draw against Wolves.

Miguel Almiron scored the opening goal in the seventh minute with a fine first-time finish.

"For the resilience and what we have had to put up with then I am sure we have deserved something," said Bruce.

"The goalkeeper has made two great saves, we are not going to deny that, but up until we had to make the changes I thought we were a constant threat and scored a great goal.

"Unfortunately we gave a poor goal away and after that we have been rock solid again and the goalkeeper has got us a point, which you always take away from home in the Premier League.

"Dwight Gayle reminded us what a very good player he is. He had a wonderful 20-25 minutes but then unfortunately nicked a groin. It's a shame because he has waited patiently for his chance and I was delighted for him to start, he made the goal and we looked a threat with Almiron and him and Joel, but you take a point with the problems we have got and resilience we have shown.

"I couldn't fault them for their effort and endeavour. A few have run a million miles and we had to."