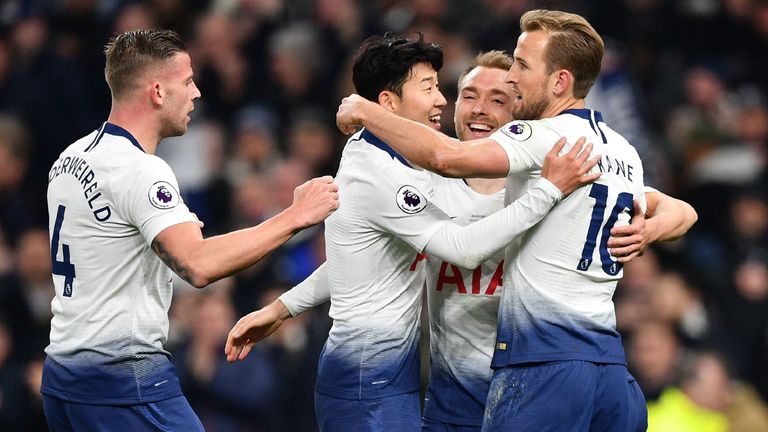 Manchester City boss Pep Guardiola says Tottenham have always been more than just Harry Kane ahead of the two clubs meeting in the Champions League.

Pep Guardiola says Tottenham have always been more than Harry Kane but insists Manchester City are wary of the "incredible" striker, who he says has "everything".

The City boss was accused of being "disrespectful" by Mauricio Pochettino after he described Spurs as the "Harry Kane team" in 2017 and the Spaniard says their Champions League quarter-final opponents have proved themselves to be strong in all departments.

Guardiola, whose side remain in contention for an unprecedented quadruple, will visit Tottenham on Tuesday for the first of three meetings in 11 days and he is in no doubt about the challenge his side face.

Asked whether Tottenham were still a one-man team, Guardiola said: "No I cannot say that or Mauricio (Pochettino) will be angry with me and I don't want it.

"I know Tottenham Hotspur is not just Harry Kane, not just now, two years ago, one year ago, a long time ago. The club is strong and have a lot of potential.

He is intelligent and when he is in the box he does everything. He is a modern striker but of course it is not just Harry Kane in Tottenham, we know and we knew it even if people didn't believe me.

"They are good in the movements, runs in behind, how strong they are in physically in all departments - in the build-up, the set pieces, the switch of plays. It's an incredible team.

"I have said a thousand times since I came here in England about them but of course Harry Kane who can deny [his importance].

"He is the No 9 for the international team, he is an incredible striker and he has everything, right, left, movements, he keeps the ball and sets up the ball.

"He is intelligent and when he is in the box he does everything. He is a modern striker but of course it is not just Harry Kane in Tottenham, we know and we knew it even if people didn't believe me."

Kane will lead the line for Spurs in the meeting of the two Premier League clubs and Guardiola is optimistic he will be able to call upon his own influential forward in Sergio Aguero, who has missed their last two games with injury.

The meeting between the two Premier League clubs will be just the second to be held at Tottenham's new stadium and Guardiola says his side must not allow that to be a factor on the night.

"It is the second time Spurs play at home so we know exactly what we are going to face. It is in our hands how we handle it.

"If we want to make a step forwards as a club, as a team we have to know to handle the situations. If we don't that's because we are not prepared to go through."