Phil Foden has had to be patient at Manchester City lately but is he getting closer to earning a starting spot?

Pep Guardiola made eight changes to his Manchester City team for their Champions League clash with Dinamo Zagreb on Wednesday night. But there was one name in the line-up which stood out more than the rest. Phil Foden's inclusion always prompts plenty of interest.

Especially at a time like this. Manchester City's first-choice midfielders have been unmovable in the last few years. But it is already known that this is David Silva's final season at the Etihad Stadium and there were signs that he might finally be feeling his age in Saturday's Manchester derby.

What better time, then, for Foden to provide a reminder of his quality?

The 19-year-old has long been viewed as Silva's successor, but it's not easy forcing your way into a side as strong as City's and his opportunities have been limited lately. This was only his fourth start of the season in all competitions. In the Premier League, he has played just 84 minutes.

Guardiola has always been adamant that Foden's time will come, and on the evidence of his performance in Zagreb, that time is drawing closer. Gabriel Jesus was the star of the show, his hat-trick coming in the space of just 20 minutes either side of half-time. But Foden was key to victory too, capping a fine night by scoring the fourth goal himself. 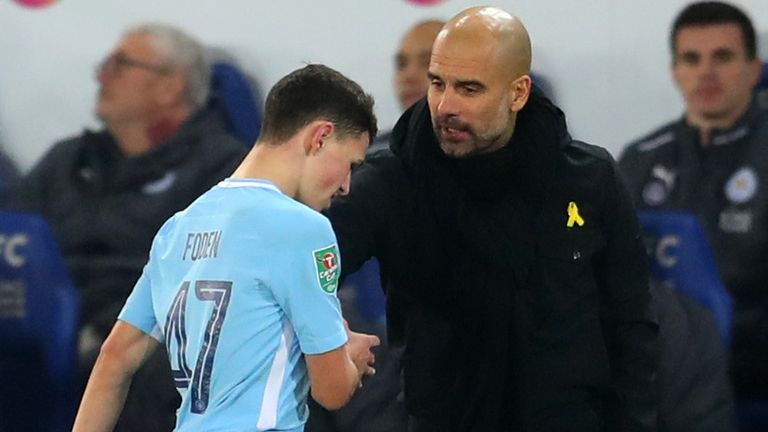 He lined up on the left of City's three-man midfield, with Rodri in the holding role and Ilkay Gundogan on the right. He could have been forgiven for lacking sharpness having featured so sparingly recently, but instead he was a lively presence from the start, funneling passes out to the over-lapping Benjamin Mendy as City probed for openings.

Guardiola had spoken about Foden's "incredible quality" in tight spaces in his pre-match press conference, and there was evidence of that in the build-up to City's first goal, when two Dinamo players tried to scythe him down mid-dribble - only to watch him continue charging forward.

After that, he showed the kind of energy and alertness that the ageing Silva no longer excels in, pouncing on a loose ball on the edge of the Dinamo box before spreading the play out to the right flank, allowing Riyad Mahrez to send over the cross from which Jesus headed home City's equaliser.

Foden's involvement in the game grew from then on.

Dinamo continued to kick him, but he was unfazed. He took up dangerous positions between the lines and, when the circumstances demanded it, he also showed a willingness to drop back in and defend, halting one Dinamo attack in first-half stoppage time with a smart interception in the centre circle. On another occasion, he even popped up with an important block in the right-back position.

Foden claimed the assist for the second goal soon after the break, his technical skill again apparent in his sharp exchange of first-time passes with Jesus. Then, when City extended their lead shortly afterwards, the teenager was involved again, this time sliding a nicely-weighted pass into the channel for Mendy to deliver the assist.

City were totally dominant by that point, with Foden increasingly assured on the ball. By the end of the game, as well as scoring City's fourth goal with an instinctive first-time finish from Bernardo Silva's cut-back, he had made more than twice as many dribbles (five) as any of his team-mates.

It is rare that Foden is afforded a full 90 minutes by Guardiola, but he seemed determined to make the most of his opportunity right up until the end. He might have even had another assist had Raheem Sterling not spurned another scoring chance from his pass in stoppage time.

The question now, of course, is whether this performance will speed up the changing of the guard in Manchester City's midfield. Silva was left out of the squad here, granting him a rest which may hint that he will return to the side against Arsenal on Sunday, but Guardiola must be tempted to change things up. It feels like Foden's time might finally be drawing closer.