Pep Guardiola is worried the March international break could lead to a rise in coronavirus cases in the Premier League; the Manchester City boss will not prevent his players from travelling to play for the national teams; "We're going to tell them to be careful"

Pep Guardiola believes the Premier League should be concerned about the upcoming international break in March, with the Manchester City boss fearful Covid-19 cases could rise once more.

The Premier League recorded two positive cases for the week of February 8-14, the same amount as the week prior and the joint-lowest total this season.

However, with City among the clubs to have experienced a Covid outbreak this season, Guardiola is wary the numbers could rise when players travel abroad for international matches.

Asked if there had been talks between clubs and national associations, Guardiola said: "No, but I don't know the situation. I think the Premier League should be concerned about this, all the leagues.

"I know the national federations need to play for qualification, for friendlies and preparation for the European Championships in summertime. This is normal. 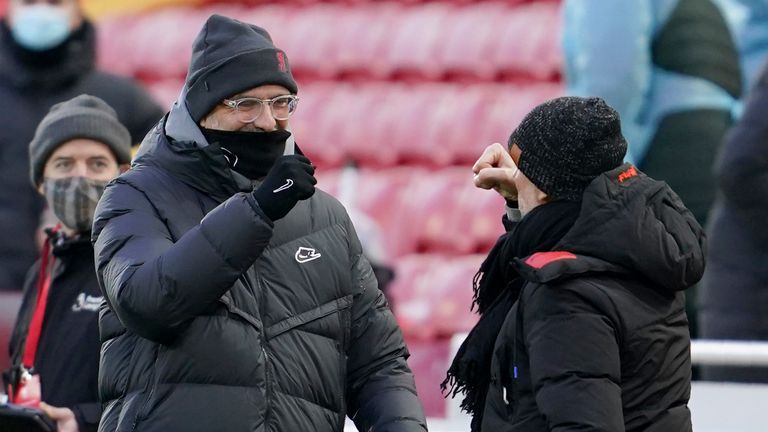 Pep Guardiola says sustained success is not possible in football and that 'sometimes it's good to lose,' as he showed his support for Liverpool manager Jurgen Klopp

"But the reason why there was a lot of cases in the Premier League and now there is barely any cases is because the people don't move. Home-training centre, training centre-home. Home-game, game-home.

"The moment you take planes and move places, I don't know, everything can happen. But I don't know, we didn't get a letter about this."

He added: "It's difficult enough to control it, so I think something is going to rise, unfortunately. I would love to say, or guess, it's not going to happen, but from experience it happened in two or three waves worldwide, so if you move you take a risk to get the virus again.

"What we have to do is follow the protocols. The scientists and doctors, what they say is best. I'm not a doctor, fortunately for the patients, so I cannot say anything.

"But what I would say, from my humble opinion, we should be careful until the summertime, when we finish the season. As much as we can control would better."

Back in November, the international break fell across a fortnight where the Premier League recorded 24 Covid cases compared to eight the fortnight prior.

Mohamed Salah and Matt Doherty were among the players to contract Covid-19 on international duty, but there was then a dip in cases before it rose to a season-high 40 from December 28 to January 3.

City's match with Everton in late December was postponed due to an outbreak at the Manchester club, and with Guardiola's side now top ahead of that rearranged fixture on Wednesday night, he admitted their hard work could come undone if the international break produces further disruption.

"Yes that's true, but I'm concerned for the fact that I don't get contaminated with the virus, because for all of us, this is the only concern," Guardiola added. "All the clubs are suffering this, the amount of players going to their own countries to play their international games. So I think everyone is a bit concerned.

"Every club has done a good job, but it's just to protect the people when travelling. Experience shows us the only way to be safe is don't move. Be tested a lot and stay at home.

"Now in the UK, I saw how many people daily are vaccinated, I'm really impressed. It's getting much better but it's there. When we relax a little bit it's coming back again, so that's why I think until spring or summer we have to be careful."

Guardiola did however dismiss the prospect of telling his players not to link up with their international teams.

"The players know it already, how the situation is," he said. "We're going to tell them to be careful, and the national team are going to protect them as well.

"I'm pretty sure the national teams have protocols, but you know, you need to have nothing to be contaminated. So hopefully it's going to be well, the players, me included, if we travel, to know exactly what we have to do."