The Blades have surprised many upon their return to the Premier League after a 12-term absence.

Sky Sports News' Keith James and Tim Thornton analyse Sheffield United's start to life back in the top-flight, with Chris Wilder's shrewd signings and his side's defensive solidity proving successful at the start of the season.

The Blades' third league victory of the season, and arguably their most impressive to date, against Arsenal on Monday Night Football, sent a message to the rest of the Premier League; underestimate us at your peril.

Lys Mousset tapped home in the 30th minute as United brought the Gunners' eight-game unbeaten run to an end in a defensively resolute performance for Wilder's newly-promoted side.

In his post-match interview, Wilder praised his team's ability to convert a competent performance into a result against one of the top-four challengers and compared it to their narrow 1-0 defeat to Champions League holders Liverpool in September.

He also touched on it being "a difficult journey" for United to reach a point in time where they are beating Arsenal in the Premier League in front of 30,775 at home, with Wilder having overseen the club's rise from Sky Bet League One to the top-flight in the space of three seasons.

Recruitment has been key to United's success during that time as well as at the beginning of the current campaign - and one man fundamental to that is the club's chief scout, Paul Mitchell, who joined the backroom staff in 2016.

The likes of Scotland international John Fleck - a free from Coventry - Ollie Norwood, a £2.1m signing from Fulham, John Lundstram, who cost £700,000 from Oxford, and David McGoldrick, who was acquired as a free agent, have all been key after nine games.

A frugal defence has also been integral to their solid start to the season.

United have conceded just seven goals in nine games (the same as league leaders Liverpool), they currently hold the highest save percentage (79 per cent) with Dean Henderson pulling off 26 successful stops, and they also top the clean-sheets chart with four so far.

Their back five of George Baldock, Jack O'Connell, Enda Stevens, Chris Basham and John Egan held a total of 28 Premier League appearances prior to the 2019/20 campaign, and have all played football in Sky Bet League Two.

The quintet cost the Blades an estimated £5m, with Egan's transfer fee accounting for just over £4m of that, while Arsenal's defence on Monday night set the Gunners back approximately £43.8m. 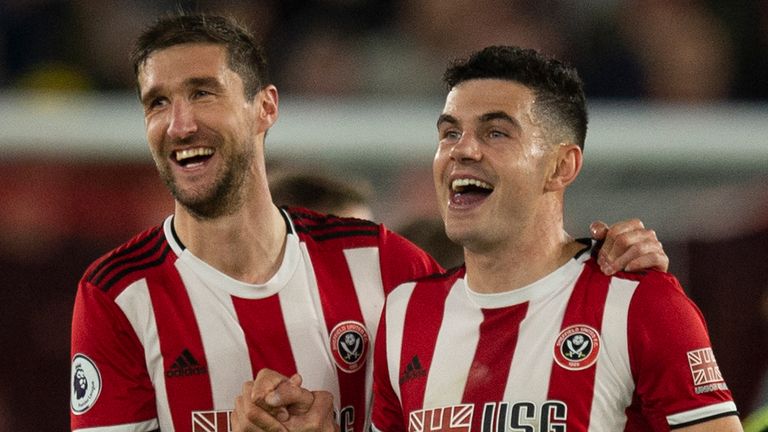 The early-season success in the top flight has also been noted at international level.

Stevens and Egan are now a crucial part of the Republic of Ireland's defence with a combined 15 caps between them, while Fleck was recently called up to the Scotland squad and played in their 4-0 defeat to Russia.

Oli McBurnie is also now a regular starter for Scotland and has eight caps to his name and Gareth Southgate regularly attends Bramall Lane and is understood to be monitoring the progress of O'Connell.

'There is a togetherness and hunger than runs throughout the club'

Sky Sports News reporter Tim Thornton gives his take on the Blades' resolute start to life back in the Premier League.

Sheffield United have received plaudits this season for their overlapping central defenders, but the foundations for their success under Chris Wilder have been built around defensive solidity.

They have conceded only seven goals from their nine games in the Premier League, but their ability to defend and keep clean sheets was also fundamental to their promotion from the Championship.

They have started the same back five in every Premier League game this season, so what is the key to their success? Well, having spent a lot of time around the squad, it is clear that there is a togetherness and hunger than runs throughout the club.

The players have worked hard to earn the right to play in the Premier League and they are determined to stay there.

That was clear from their pre-season training camp in Portugal which set the tone for the season ahead - the players endured long days on the training ground when they were pushed to their limits.

The lads still talk about 'Terror Tuesday', a day of hard running in the sunshine designed to take the players out of their comfort zones, but it is those hard yards that have given this squad the platform to perform this season.

Team spirit is another big factor. The players get on well, but they are also prepared to push each other and drive standards on and off the pitch.

It is a culture set by Wilder, who admitted in pre-season that everyone had to raise the bar in the Premier League, including the coaching staff.

There is a humility that runs throughout the club, an acceptance that the team is stronger than the sum of its parts. And that is why the attacking players take just as much pride in keeping clean sheets as the defenders.

Wilder was keen to stress that he would not take a wrecking ball to his squad after promotion and has been true to his word.

New signings have slotted in seamlessly and everyone knows their role. It shines like a beacon that the players are comfortable in each other's company and familiar with each other's game.

So, despite a bright start to the season, there is no danger of the squad getting carried away.

As far as they are concerned this is just the start, and the collective goal is to establish Sheffield United as a Premier League club for many years to come.