Wolves have been forced to fly to Greece for their Europa League clash against Olympiakos after UEFA rejected their request to postpone the fixture amid heightened coronavirus fears.

The Premier League club insist the game poses an "unnecessary risk" as cases rise across Europe, and after the Olympiakos owner Evangelos Marinakis was diagnosed with coronavirus.

The game is to be played behind closed doors after the Greek government enforced a temporary suspension on spectators at sporting events, and Wolves boss Nuno Espirito Santo questioned the point of playing without fans.

All of Olympiakos' football staff have tested negative for the virus and UEFA have ordered the game to go ahead, despite other Europa League games in Spain and Italy being called-off - and Wolves say they respect that decision.

"Our position is that the trip poses unnecessary risks to our players, staff, supporters and the families of all who travel, at such critical and uncertain times," the club said.

"Our concern is also for our opponents, whose players and staff have today been tested, and will now be expected to play their part in an important fixture, under the difficult and challenging circumstances of their owner suffering with the virus.

"There is also disappointment that the match will be played without home and away supporters, as that is part of what makes European competition so special, as well as the fact our fans have already contended with similar obstacles on our Europa League journey already this season.

"We believe that there are some things that are more important than football, and that the good health of our pack and the general public is one of them.

"However, we respect the decision of UEFA and the integrity of the competition, and we will travel tomorrow to Greece to play the fixture.

"We hope that our request to UEFA, and our acceptance of their decision, can act as the catalyst for them to consider alternative options moving forwards, as this will not be the last fixture to be affected by coronavirus." 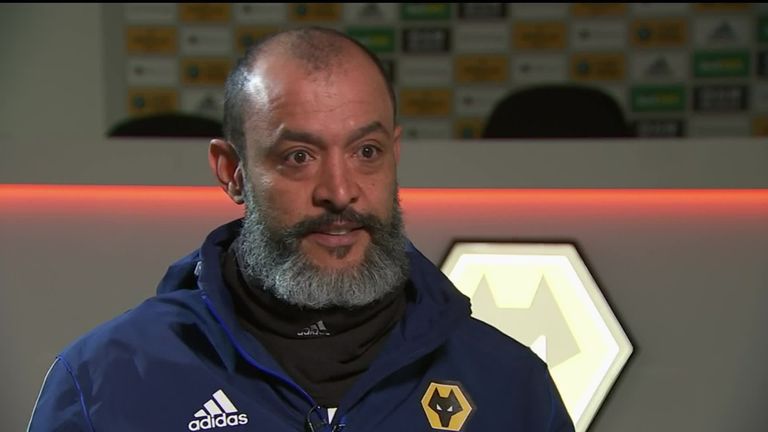 The Greek club said in a statement on Wednesday: "Olympiakos FC informs that after the required medical exams to which all the members of the football staff, as well as board members and staff, were submitted, all the tests came out negative for the COVID-19 virus."

'We are living with fear' says Nuno Espirito Santo

The statement from Wolves comes after boss Nuno Espirito Santo told Sky Sports News earlier on Tuesday that he did not want the game to go ahead, demanding the club staff and players health be put first.

"This is more than football. This is a social situation. Everybody is worried. Something has to be done. Closed doors in stadiums is not a solution. It's not normal.

"We are not happy to go. Olympiakos are suffering their own problems. It's time to think - is there another option? Can we stop? This will eventually happen in the Premier League. Let's think about it.

"We are living with fear. If we have to go then as a club, then we have to come back.

"Me as a parent - should I go there if I didn't have the obligation of my job? It's bigger than football. It's social, it's society."

Captain Conor Coady has revealed he is worried about his family's health ahead of Wolves' trip to Olympiakos.

"That's the thing really. You go home to your wives and kids after the game so that's the priority," he said.

"We need to make sure it's right when we're going home but yeah, we read everything, we see everything.

"We've seen the game postponed tonight between Manchester City and Arsenal but as players, there's not a lot we can do. All we can do is train, prepare and listen to our manager and play tomorrow night.

"We've got to prepare to get ready to play a game which is a really important game for this football club.

"People have had a lot to say, we've read a lot of things in the press and whether it's right or wrong, we're professionals and we're ready to go and compete as much as we can."

"Everyone can react the way he feels, we have to respect the standpoint of Wolves," Martins said. "We know the responsibility lies with the authorities and those who tell us what to do.

"We have full trust in them and if they tell us it's safe to play behind closed doors we will do so. We understand Wolves, the same way we have trust in the authorities.

"There have been thousands of cases in Europe but this club has taken all measures necessary and we have all been tested and the results have been negative. There should be no doubt in the minds of anyone who is going to come."