Accidental collision saw Raul Jimenez taken off on a stretcher, while David Luiz continued with bandaged head; Jimenez was given oxygen after the coming together; Fabio Silva came on for Jimenez with the score 0-0 at the time

Wolves say striker Raul Jimenez is "comfortable" after undergoing an operation on a fractured skull suffered in their win over Arsenal on Sunday.

Jimenez was stretchered off following a clash of heads with Arsenal defender David Luiz and was given oxygen after the accidental coming together.

The clash of heads occurred early in the match and resulted in a lengthy delay of around 10 minutes as paramedics and medical staff saw to both players.

On Sunday evening, the Mexican was taken to a London hospital, where he was conscious and responding to treatment.

In a statement on Monday, Wolves said: "Raul is comfortable following an operation last night, which he underwent in a London hospital. 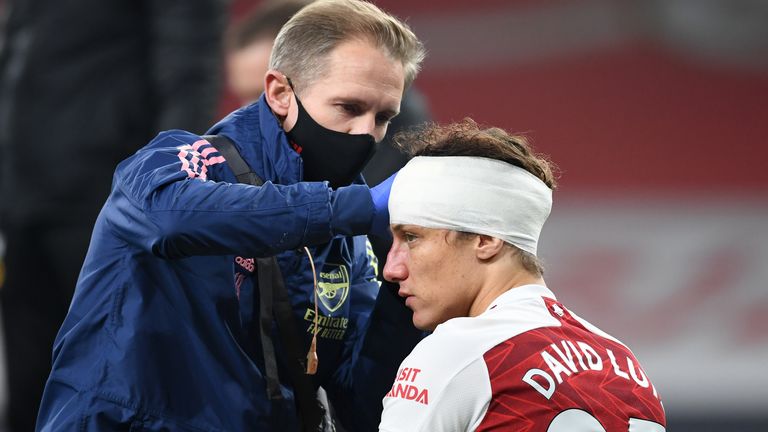 Players must accept the verdict of the club's medical staff when they suffer head injuries, even if it isn't what they want to hear, says Stephen Warnock.

"He has since seen his partner Daniela and is now resting. He will remain under observation for a few days while he begins his recovery.

"The club would like to thank the medical staff at Arsenal, the NHS paramedics, hospital staff and surgeons who, through their skill and early response, were of such help.

"The club ask that Raul and his family are now afforded a period of space and privacy, before any further updates are provided in due course."

Jimenez took to social media on Monday evening saying: "Thanks for your support messages. I will be under observation and I hope to return to the pitch soon."

Wolves captain Conor Coady said the thoughts of everyone on the pitch were with Jimenez and Luiz after the incident.

Coady went up for the header immediately behind Jimenez and Luiz and admitted both sides were shaken by the collision.

Speaking after the game, Coady said: "This happens in football but you don't like to see it and I think both sets of teams went out and then played properly.

"It was a tough thing that happened. He is with the right people and that's the most important thing but we just hope and pray that everything is OK because he is the one we are thinking about right now.

"I was at the front just behind him, so I jumped with them as well and you hear it and, as they dropped, he was on his side. It's something we never want to see." 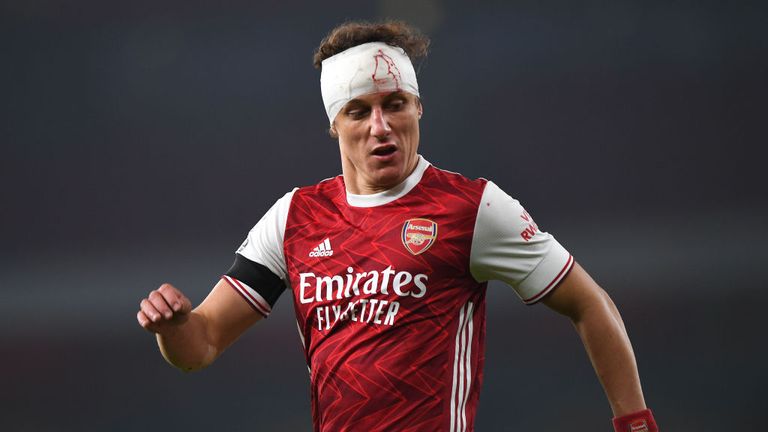 Despite also suffering a head injury in the clash, Luiz was allowed to continue with a bandaged head after receiving seven stitches in a three-inch wound.

The Brazilian returned to the pitch but was withdrawn at half-time with Rob Holding his replacement.

Something is not right. This cannot be allowed to continue. How many warnings does football need?

Luke Griggs, deputy chief executive at Headway, told Sky Sports News: "When you have such serious impacts such as that, it's hard not to suspect a concussion may have occurred.

"The medical teams I'm sure did things in the best interest of the player but you've really got to question whether these concussion protocols are fit for purpose.

The International Football Association Board (IFAB) said its Concussion Expert Group (CEG) had met on Wednesday and said it was now preparing the ground for competitions to test new protocols for concussion substitutes, with trials set to begin as early as January next year. 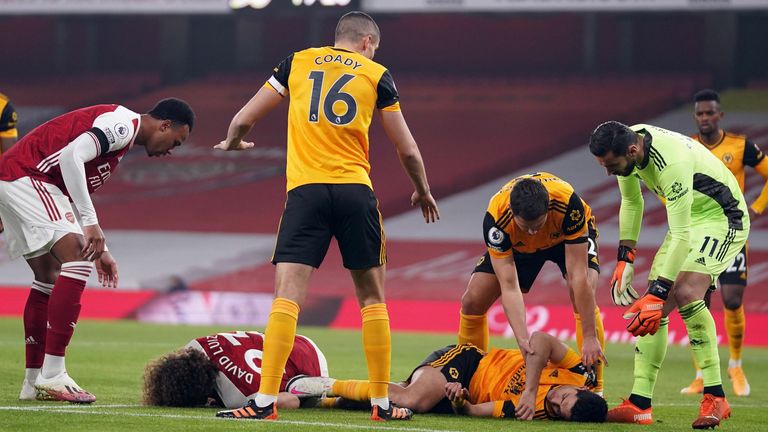 Football is behind other sports on head injury procedures and should bring in concussion substitutes immediately, says former England international Sue Smith

"The members (of the expert group) recommended further consultation, working with the FIFA medical subdivision and other stakeholders, to facilitate trials to start from January 2021 for any competition that is interested in taking part," a statement on the IFAB website read.

The statement also said: "The CEG again emphasised that the protection of players is the main goal and that a clear and uniform approach is needed, which can operate effectively at all levels of the game.

"Therefore, the group agreed that applying an 'if in doubt, take them out' philosophy would be the best solution to safeguard the health of football players."

What's the procedure for referees? "It is to immediately stop the game, which is what Michael Oliver did. Everyone knew that Jimenez was injured, and Michael stopped the game straightaway for the relevant personnel to come on and check.

"At every game there is a designated doctor in the tunnel - the red area as it is known now - and he judges whether the player has got concussion and whether he can continue, which was more relevant in this case for David Luiz. Everybody knew that Jimenez was never going to continue.

"I was in this situation quite a few years ago when I unfortunately did the game where David Busst broke his leg very early in the game. The players around him can't do anything to help, and the best thing for the referee to do there is to take them away.

"That is what Michael Oliver did at the Emirates. He sent them down the other end, got footballs on, he knew it was going to be a long time. It occupied their minds, kept them warm and focused on the game, and that leaves the relevant bodies to get on with their job. It was a really good move by Michael."

Can referees make a call on suspected concussion?

"Michael, or any other referee, is not qualified to make that decision," Gallagher added.

"If he does suspect, in this example David Luiz, may have concussion or is looking a little bit groggy on his feet, he will ask the relevant person to come on and assess him.

"In that situation you need someone who is an absolute expert in that field."