Ahead of Crystal Palace's meeting with Brighton, live on Sky Sports on Saturday, Roy Hodgson tells Nick Wright why Palace's academy is central to the club's future, how the TV show Homeland reminds him of modern-day management, and why he hasn't given any thought to retirement.

Roy Hodgson's managerial career has spanned more than four decades. It has taken in eight different countries, with spells in charge of 16 clubs and four national teams - including, of course, his own - but half an hour in his company at Crystal Palace's Beckenham headquarters makes it abundantly clear that his passion for the job burns as brightly as ever.

"I think that's very, very important," he tells Sky Sports in between sips of a cappuccino in the first-floor canteen overlooking the club's training pitches. "I very much doubt that you could find someone working at this high level who doesn't feel the same as he did when he first started.

"Those 95 minutes of a Premier League match, with between 20,000 and 70,000 people watching on the terraces and tens of millions watching all around the world, are a very, very exciting, tension-filled time. If you had the attitude that it's just another game, just another day of my life, I don't think that you would last very long."

It is 18 months since Hodgson was appointed as manager of his boyhood club. He took them from the bottom of the Premier League to an 11th-placed finish in his first season, and now, having only lost one of their last eight games in all competitions, Palace are heading in the same direction. Beat arch-rivals Brighton on Saturday and the top half will be within reach. 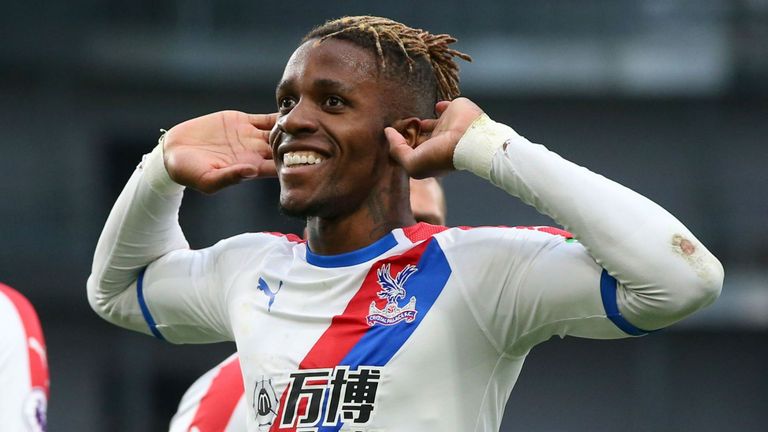 Hodgson has done a fine job, in other words, earning him a contract extension which will take him up to the summer of 2020. His longevity is extraordinary in the context of modern football - at 71 and 198 days old, he recently overtook Sir Bobby Robson as the oldest manager to take charge of a Premier League game - but he insists there is no secret to it.

"I suppose the word that I would most like to see used is competence," he tells Sky Sports. "I'm not so certain that you can survive for so long and be without a job at so few moments during that long period of time without being competent and having quality as a coach and manager that people recognise and want to tap into.

"I think enthusiasm is also important because there are highs and lows. Coming back after our last two away victories [against Leicester and Burnley], you feel in a really, really good place. But if we don't win tomorrow, I will be very, very low. That's what the job is. Unfortunately, there is no way of partitioning it so that you only get the good part."

Hodgson delivers that last line with a smile. He knows how quickly the mood can change. In an age of social media and wall-to-wall football coverage, it only takes a few poor results for the pressure to be cranked up. Short-termism, he says, is just part of the job as a modern-day manager.

"I'm afraid that's to do with money and the importance of the Premier League," he says. "There is so much money as a reward for being a Premier League team that unfortunately it's always going to lead owners to get into situations where they feel under pressure and feel the need to do something.

"They can't do anything more than appoint the manager and give him the responsibility for trying to get good performances out of the team. So in that environment, there is always going to be a risk that they are going to do the only thing they really can do, which is to change the manager.

"It's much easier getting rid of managers than players. The player sits there, whether he's playing or not playing, whether he's contributing or not contributing, and if he's got that contract in his pocket, it's your responsibility to look after him - even to the extent that if he is out of contract, you still have to look after him during the summer months until the season starts again."

Even for a manager of Hodgson's experience, it requires considerable resilience to cope with the level of scrutiny that comes during the more difficult periods. Often, he says, there is also a need for restraint - particularly when the criticism is not entirely fair or accurate.

"I don't know that anybody copes with it well, if the truth's known," he says. "None of us really want the criticism that comes during those times, when things aren't going well. The problem with criticism is often that it is a conglomeration of half-truths. Someone will be able to find a statistic or a fact that makes it hard to dismiss their argument as wrong. But it is wrong, you know it's wrong, you just can't prove it.

"If you want a great analogy, all you have to do is look at the TV show Homeland, which I'm watching for the first time, years after everyone else. In every episode, there is someone who finds themselves in a terrible, unfair situation which is totally wrong, but they can't prove it. That's often where we are as football managers."

Thankfully, Palace's recent results have given Hodgson some relief in that regard. The mood around the club is positive right now - and it has been enhanced by the continued emergence of Aaron Wan-Bissaka. The Croydon-born right-back is the first Palace academy product to establish himself in the senior side since Wilfried Zaha.

I get an awful lot of satisfaction from the day-to-day work, the interaction with the players, the chance to be with them on the training field and work at the various things we work at to prepare the game.

Hodgson's intention is that many more will follow him. Palace's South London catchment area is a hotbed of talent, with Wan-Bissaka, Jadon Sancho, Joe Gomez and Declan Rice just some of the exciting young players to have emerged from the area in recent years, and Hodgson, a South Londoner himself, is determined for Palace to capitalise.

"It is an area which has got the potential to produce the players, that's something we're very conscious of here at the club," he says. "We're trying to improve our academy, improve our facilities, attract more players and make certain that when those players come, we work hard with them to make sure that they go the same way as Wilf Zaha and Aaron Wan-Bissaka.

"We would be very happy if our academy could produce more players like Aaron and Wilf because players like that are very, very difficult to find in the transfer market. And if you are fortunate enough to find them, you will have to have an awful lot of money to spend to buy them.

"Obviously we need investment in the first team, but we also need the academy. We need to make certain that by developing our status as a bona fide Premier League club in the south-east, we'll be the club people want to send their children to and the good young players will want to come to.

"Part of that is making sure they know they will have chances. It won't just be a question of, 'Well, I'll be their best young player for two or three years, but when a vacancy comes up in the squad they will go and spend 50 or 60 million on the best player in France, Spain, Germany, Italy or wherever it happens to be.'

"I think we have an advantage in that sense because we aren't that type of club. I don't see us going down that road where all of a sudden we're another Manchester City, Chelsea or Manchester United. I see us as a club which has to use money wisely, make sure the players coming in are the right types, and that there are players coming up from the academy.

"That vision is shared by Steve Parish and the American owners. It's a major priority, after the priority, and the priority for us now and probably for a good number of years, is staying in this league. Can we stay in this league and constantly improve? Can we fight off the spectre of relegation more easily each year until such a time that people are not naming us as potential relegation candidates at the start of every season?"

That is the next step for Palace and it is one that, at 71, Hodgson still hopes to oversee. Even with his current contract due to expire at the end of next season, the prospect of retirement is a long way from his mind.

"I live in the present, basically. I try to make certain my life is as good as it can be at any given moment in time, doing what I've got to be doing and living my life the right way. In moments like this, where fortunately that is very much the case, I just try to profit from it without trying to get the crystal ball out and think what will it be like in March 2020.

"I just don't know, but at the moment I see no reason why I should fear that it's going to be vastly different, because up until now, in the year and a half that I've been here, I certainly haven't noticed any difference in how I feel.

"You cross bridges when you come to them. There's no point imagining bridges or dreaming up bridges. You might as well carry on doing the thing you love doing, get as much enjoyment from it as possible, and try to be as good at the job as you can. After that, we'll see what the future brings."

Watch Crystal Palace vs Brighton live on Sky Sports Premier League HD from 11.30am on Saturday