"All the players are smart enough to see what the club is trying to build "; Patrick Vieira succeeded Roy Hodgson as manager in the summer and has overseen not only a squad overhaul but the implementation of more possession-based football which he hopes Wilfried Zaha will remain a part of Patrick Vieira is hoping Wilfried Zaha will remain at Crystal Palace as the club embark on an exciting new era.

The former Arsenal captain succeeded Roy Hodgson as manager this summer and has overseen not only a squad overhaul but the implementation of a more possession-based brand of football.

While player turnover has seen the departures of experienced players such as Patrick van Aanholt and Gary Cahill, Zaha is not one name Vieira wants to lose anytime soon - despite the 28-year-old previously stating his desire for a new challenge.

Speaking to Sky Sports News, Vieira said: "I'm aware about Wilfried [Zaha, his situation] in the last couple of years but we had a really good conversation and I'm looking forward to working with him.

"He's one of the most talented players in this league and we don't want to lose one of our best players.

"All the players are smart enough to see what the club is trying to build and where the club want to go - we've made some really exciting young player signings and I think that shows the direction the football club wants to take.

"I hope Wilfried will be part of that and I am looking forward to working with him and trying to take Palace as high as we can." 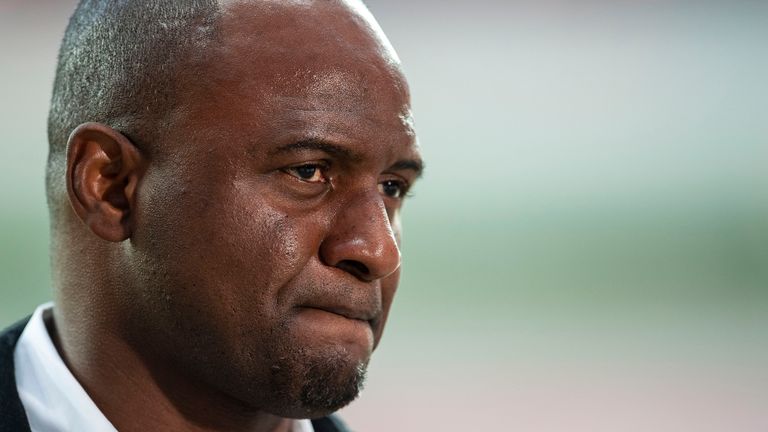 Vieira is confident heading into his first managerial role in England after spells with New York City and Nice but has also urged patience as his newly-assembled team find their feet.

"We are an ambitious football club and want to challenge as high up the table as possible," Vieira added.

"We believe we have a good squad but at the same time we have to realise some of the players will need time to express themselves at this level.

"We can be excited about the young, talented players that we are developing but we need to manage expectations.

"So we'll need a little bit of time to make everything work and find the right balance." Patrick Vieira faces a rebuilding project at Crystal Palace which makes his appointment a big gamble, according to Danny Mills

Crystal Palace: What do they need to do this summer?

Scoring has again been an issue for Crystal Palace. They scored just 41 goals, ranking 15 in the Premier League, and are still searching for that consistent goalscorer.

Wilfried Zaha and Benteke both hit double figures, but it's a concern the third-highest scorer was Eberechi Eze with four.

Michy Batshuayi endured a frustrating second loan spell at the club and January signing Jean-Philippe Mateta has yet to get going. Benteke signed a new contract, but they may need to sign a new striker.

Eze's long-term Achilles injury has also rocked Palace, but the arrival of Reading's Michael Olise should help reduce the burden.