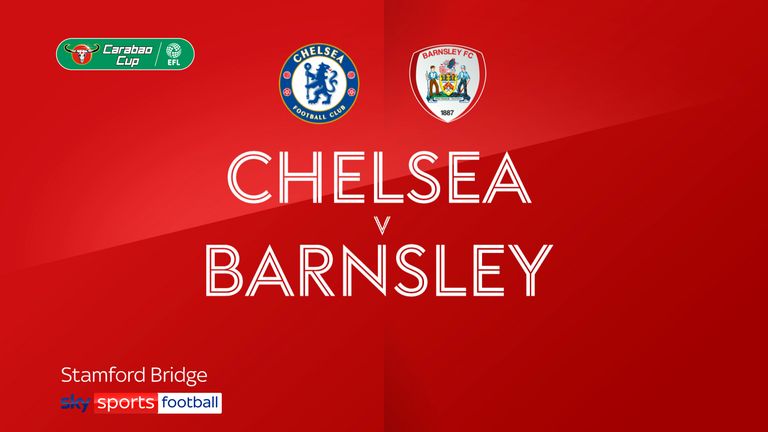 Highlights of the Carabao Cup third round as Chelsea faced Barnsley.

Kai Havertz scored a hat-trick as Chelsea romped to a 6-0 victory against Barnsley and into the fourth round of the Carabao Cup.

Tammy Abraham opened the scoring for a much-changed Chelsea side, and Havertz doubled their lead before the break. Ross Barkley then notched a third early in the second half at Stamford Bridge on Wednesday night, before Havertz added two more.

It was a night of good news for Chelsea's new signings and Frank Lampard as Thiago Silva made his debut for the club, and Ben Chilwell also enjoyed his first appearance, stepping off the bench to assist a late sixth for fellow substitute Olivier Giroud.

Man of the match: Kai Havertz

Barnsley had a somewhat shaky start but grew in confidence and really took the game to Chelsea, testing their defence once or twice and forcing Silva and Fikayo Tomori into some errors early on.

But a mistake at the back cost Barnsley the opener on 19 minutes as a loose pass while trying to play out handed the ball to Abraham, and he took a touch before firing past Brad Collins.

Nine minutes later and Chelsea had doubled their advantage. It was good work from Mason Mount as he cut in from the left and fed it through to Abraham, and his smart dummy allowed it to slip through to Havertz in the box, who finished calmly to notch his first goal for the club.

Any hopes of a Barnsley comeback were soon quelled in the second half. After 49 minutes they were responsible for their own downfall again as Alex Mowatt made it too easy for Havertz to nick it off his toe and find Barkley, who charged into the box and fired home.

Six minutes later it was four as Chelsea won the ball high up again and Mateo Kovacic played in Abraham, who found Havertz in the middle to slot in. And after 65 minutes it was hat-trick completed as Havertz linked up with Abraham again, latching onto his ball in behind before beating the goalkeeper and sliding the ball into an empty net.

A fine night for Chelsea was then capped off on 83 minutes as Chilwell crossed for Giroud to nod home a sixth from close range.

Analysis: How did Thiago Silva perform on his debut?

It was mostly a calm start to life in England for Thiago Silva. The first few minutes of his debut saw plenty of good touches and silky passes out of defence, but he may have got a little too relaxed on 14 minutes as a sloppy moment saw him give the ball away and allow Barnsley a chance to score.

Despite turning 36 this week he also proved he's no slouch as he raced out of position on more than one occasion to make some key interventions and sliding challenges.

There will be bigger challenges to come but overall it was a very useful hour-long workout for the former Paris Saint-Germain star. It remains to be seen, however, if Lampard will thrust him straight into his Premier League side now on Saturday at West Brom, a game you can watch live on Sky Sports.

Chelsea's Frank Lampard: "I'm delighted with Kai, it was everything I wanted the night to be for him. Because Kai has had no pre-season, and signing for the club took a few days out for him as well.

"Tonight was a great exercise for him to see how we want to work off the ball, for him to be a part of that. He made a great recovery tackle for Ross' goal. And then to also just have some freedom on the ball and roam in more central areas.

"I thought it was a great combination with Tammy, and I was pleased with the way he grew into the game in terms of confidence. It was a great night for Kai, and the first of many for him."

Barnsley's Gerhard Struber: "We found good moments in the first half, we had very good pressing and especially we had 20 minutes completely in our hands but we couldn't convert any chances. This is the biggest issue for us at the moment. We're not taking our chances, but when we can do that the games will go in a different direction.

"We helped Chelsea with three goals through mistakes, and after that it was difficult. We didn't have the right intensity and aggression in the second half, so Chelsea were able to play without pressure."

Man of the Match - Kai Havertz 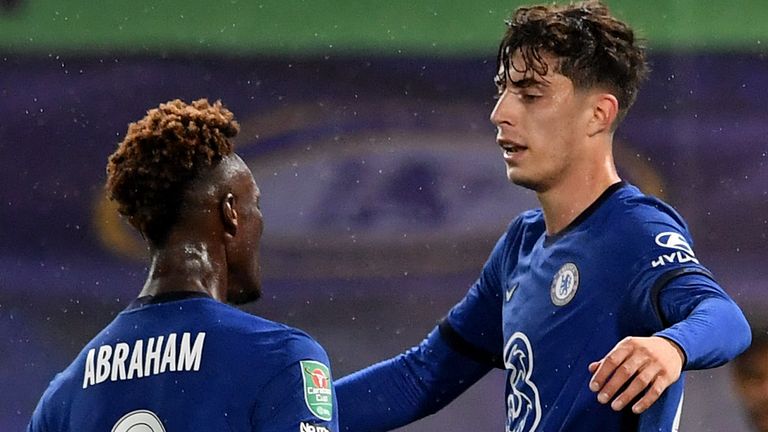 Chelsea's midfielder Kai Havertz says he is hungry for more goals with his new club after scoring a hat-trick against Barnsley in Wednesday's 6-0 win at Stamford Bridge in the Carabao Cup.

It seems unthinkable that a 21-year-old with just two Premier League appearances under his belt could be under any kind of immediate and significant pressure to perform, but the price tag and the nature of the modern game meant this was a huge night for Havertz.

He looked far more comfortable in a more central role, took his goals well and linked up brilliantly with Abraham, who deserves an honourable mention for his performance, too. You would expect Lampard to keep Havertz at No 10 now going forward if he wants to get the best out of him.

Chelsea head to West Brom in the Premier League on Saturday, live on Sky Sports Premier League from 5pm, with kick-off at 5.30pm. Barnsley are back in Championship action at home to Coventry at 3pm on Saturday.